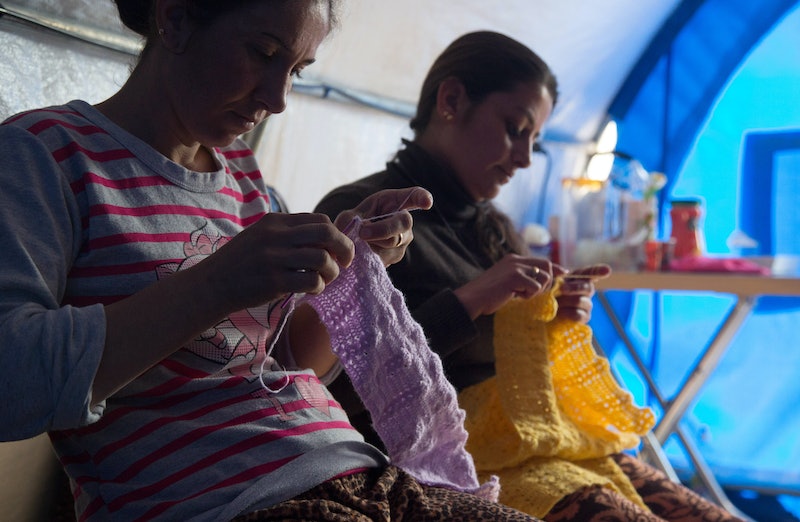 Break out the needles: according to a review of studies on knitting produced by the charity Knit For Peace, the habit of "knit one purl two" has an extensive range of health benefits. Knitting by hand is one of the most ancient human arts — we know that the ancient Egyptians knitted together socks from at least the 3rd century AD — and as well as being a brilliant way to produce your own handwarmers, it seems that it's also got a decent chance of helping you feel less anxious and healthiert o boot.

Knitting is increasingly popular, particularly among millennials. There are a lot of explanations floating around for this, from the increasing reclaiming of traditionally "feminine" art forms as feminist (the range of "F*ck The Patriarchy" Etsy embroidery products is staggering) to the fact that it's cheap, sustainable, and calming. Knitting can also be a social activity; the idea of the "stitch 'n bitch", a social group, usually of women, who gather to craft and talk, has been present in the UK and U.S. since at least World War II, and is currently experiencing a strong resurgence. In this uncertain world, relying on your ability to produce your own socks can be steadying.

But there may be more to knitting than just DIY sweaters and scarves. The review of independent health studies conducted by Knit For Peace shows that there's now a significant amount of evidence for the benefits of making something substantive to wrap around your wrists, or those of a loved one or stranger.

Knitting science has actually been pretty extensive. One 2013 study surveyed over 3,500 knitters worldwide, and provided the insight that knitting is a meditative and calming experience that helps with wellbeing. A 2009 study looked at recovering anorexia patients, who reported that it reduced negative thoughts and produced a therapeutic effect, while a collection of research has suggested that the benefits of knitting are a bit like mindfulness meditation: people who knit have to be present in the moment, focus on what's going on in front of them, and get into the rhythmic "flow" of what they're doing. The studies sourced by Knit For Peace demonstrate that knitting is also useful for lowering blood pressure, increasing social interaction, and keeping dementia at bay.

The Knit For Peace review also had another important component: surveying 1,000 knitters themselves. Many of those surveyed were over 60 and female, and 10.7 percent believed it helped them deal with chronic pain, while 21.4 percent noted that it appeared to ease the pain of arthritis. Those who knitted in groups reported that it made them feel less socially isolated and reduced their loneliness. And 64.8 percent of the respondents said that being part of the Knit For Peace organization, which organizes knitting groups worldwide to donate knitted items to hospitals, prisons, refugee groups and shelters, made them feel "useful".

One aspect that the studies didn't necessarily cover was whether or not being good at knitting was necessary to start feeling the benefits. People involved in science about knitting tend to be devoted practitioners who can produce a sweater without a sweat, and involving yourself in a complicated hobby may increase frustration in the short term — but once the skill is mastered, there's solid evidence that it improves wellbeing and helps mental health.

If you're hoping to get involved in knitting for the first time, experts recommend that you don't immediately go for something complicated like a sock: stick to something flat and rectangular, like a cloth or a scarf. And the best thing about the massive popularity of knitting among millennials? There are thousands of Youtube tutorials to help you out step by step. Grab some wool and prepare to get snuggly.