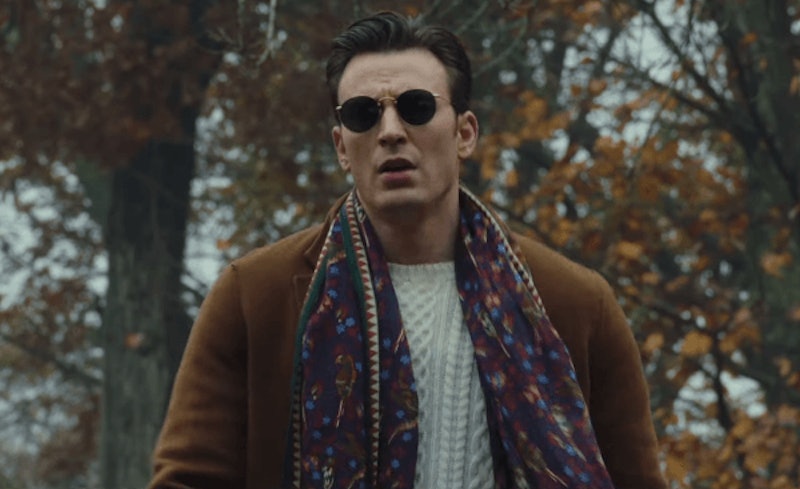 In an early screening of the ensemble whodunnit Knives Out, a one-word utterance overheard in a dark theater later became Twitter famous. Anna Menta, a reporter at Decider, tweeted about hearing another woman at her preview of the film — later revealed to be Nicole Gallucci, a reporter at Mashable — say the word under her breath as a knee-jerk response to seeing Chris Evans wearing chunky cream knitwear in the film. The tweet would go on to get over 50,000 likes on Twitter. The word was, simply, "sweater."

In a film full of actual stars like Jamie Lee Curtis, Don Johnson, Christopher Plummer, Chris Evans, Toni Collette, Daniel Craig, and more, all of whom collectively possess too many Oscar, Emmy, BAFTA, and even a few MTV Movie & TV Award wins and nominations to count, it was the luxurious knitwear that somehow stole the show. It's truly astounding that in a world where Daniel Craig is a Holmes-esque detective with a Kentucky drawl that slowly spills out of him like a barrel of molasses and Toni Collette plays an insufferable Goop-like wellness guru (that I'd probably follow on Instagram), the true stars of this movie were made by some person with a loom and penchant for a hefty wool blend.

In the film, a family is brought together by its patriarch's shocking death, which is first presumed to be a suicide. The death of mystery writer Harlan Thrombey (Christopher Plummer) is the catalyst to a whodunnit that lures in detective Benoit Blanc (Craig), who has more of a penchant for tucked in ties and collared shirts, which helpfully distinguishes him from Family Sweater.

So let's break down the Thrombey family by their knitwear choices. On one side of the f*cked up family, there's Harlan's son Walt (Michael Shannon), who can be seen wearing a brown argyle sweater that has little flakes in the pattern that make you think, is that pilling or is this intentional? He's married to a woman who insists on wearing a crewneck sweater with a collared shirt. Together, they're raising a budding teen neo-Nazi named Jacob (Jaeden Martell), whose knitwear comes in the form of a school uniform style.

The true stars of this movie were made by some person with a loom and penchant for a hefty wool blend.

On the Jamie Lee Curtis-led side of the family, her character Linda tends to prefer matching silk sets and suits. But her husband Richard's (Don Johnson) quarter-zip sweaters read like a rich man who collects globes "because he's a citizen of the world." Their son Ransom (Chris Evans) wears the famous fisherman-style sweater that set the internet ablaze and prompted the aforementioned screening room whisper.

Finally, there's Toni Collette's Paltrowian character Joni, the widow of Harlan's son Neil, who wouldn't be caught dead in a cable knit. But her daughter Meg (13 Reasons Why star Katherine Langford) is a Sarah Lawrence undergrad with a bohemian cardigan that cloaks her entitlement.

Jenny Eagan, the film's costume designer, tells Bustle via email how she captured the arrogance and privilege of the Thrombey family with the help of plenty of yarn. In the case of Ransom, choosing that famous sweater was the result of a very particular point of view. "Ransom was just that rebellious, self-centered character who disrespected the fortune he was handed," Eagan tells Bustle. "I found that expensive pieces that weren't cared for properly, then distressed, made it easy to not want to like him." Of course, Eagan admits she "couldn't help" making those same pieces have textures that were "luscious and cozy."

Harlan's caregiver Marta (Ana de Armas) is the protagonist of the film who helps the detectives look into the mysterious circumstances of her boss' death, despite being a suspect herself. As the sanest character on screen at any given time, Eagan chose to dress her in "soft, light tones," striking a noticeable contrast to the dark colors inside the Thrombey mansion and the chaos surrounding Harlan's death.

While the film sits cozily in the whodunnit category, its exploration of socioeconomic status and class comes through in not only its plot (Marta is the daughter of an undocumented immigrant) but its wardrobe. Langford's Meg, a fair-weathered ally to Marta and the staff on the Thrombey estate, wears long, neutral-hued sweaters (as seen above) to disguise her as a wolf in sheep's clothing. It's a sweater that screams, I'm your liberal friend who studies art theory at SLC! Not, I'll literally do anything to get my share of the family fortune!

For budding internet troll Jacob, status is a little more apparent in his clothing. The alt-right teen has a lot of "thoughts and opinions," Eagan says, which is why she found it important to define him with a uniform. It's "a bit ambiguous," she says, "[he's] not quite sure what he was thinking when," or "who exactly he was," — he's an internet troll, after all, and can really only be defined by a generic egg avatar.

If New York is the fifth friend in Sex and the City, then sweaters may as well be at least one or two extra honorary members of the Thrombey family. Their wardrobe tells a story that Eagan says screams "power, control, and distinction," though they're fantastically failing at holding on to all three. Thankfully, when the dust settles and they need to get their dignity back, there's no better way to command attention or seize familial power than with a sharp rib stitch.

Editor's Note: This post has been updated to correct the spelling of Nicole Gallucci's name.

More like this
Anne Hathaway Revived 'The Devil Wears Prada' In The Most Andy Sachs Way
By El Hunt
Harry Styles’ Red Carpet Looks Have One Thing In Common
By El Hunt
Paul Mescal, Man Of Mystery
By Samantha Leach and Heather Hazzan
12 ’90s Movie References You Missed In 'Do Revenge'
By Radhika Menon
Get Even More From Bustle — Sign Up For The Newsletter

This article was originally published on Dec. 2, 2019