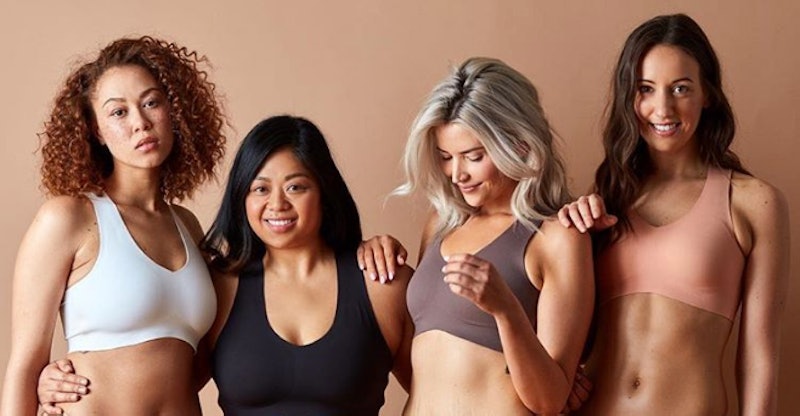 If you're ever picked out a bra, you know how challenging it can be. This brand wants to make it a little easier. Knixteen is off to create "the perfect bra," and the brand is asking for a little help. They tapped into teen powerhouses LGBTQ activist Jazz Jennings, former Little League baseball pitcher Mo'ne Davis, YouTuber Fiona Frills, actress Bailee Madison, and YouTuber and author Jessica Universe to create their versions of the bra that they think the world needs the most. Let's say it together now — it's about time.

Finding the perfect bra might be hard, but it gets easier when you have a bunch of awesome babes in the mix to brainstorm the best bra. One of those babes is you. Knixteen put together a survey to find out what women want most when it comes to bras. After that, they will compile all of the info, find out what ranks highest out of print, fit, and support, and craft the perfect bra for teens.

"Teens have always been vocal about what they’re passionate about and at Knixteen, we celebrate that every day," founder of Joanna Griffiths tells Bustle. "In order for this campaign to be a successful, it’s so important that we get input from the teens who will ultimately be wearing our bras. We’re going to take the results of the survey and use that input to design bras that teens everywhere will love and never want to take off."

After the survey, the brand will bring all the information together and pass it along to a group of pretty awesome teens to take it from there Jennings, David, Frills, Madison, and Universe will take what they're learned and create one bra each from the takeaway.

"We should ask real women what they want and need instead of telling them," says Frills. "Getting authentic, real-world feedback and inspiration will lead to making a bra that everyone actually wants. Since I'm not a bra designer, I can bring a different perspective — something that a traditional bra designer might not think about.

The first bra will launch on Aug. 1 with the rest rolling out on the first of the month through the rest of the year. The bras will be limited edition, and there's no telling what they will look like.

What should you expect to see out of their bras? Well, the results of the survey aren't in just yet. There were a few worlds that popped up for Davis, Frills, and Jennings though — comfortable. There might not be any clues about what they will look like, but how each one will feel is heard loud and clear.

"I’m all about comfort," Jennings tells Bustle. "I’m tired of bras that make me feel like I’m wearing a bra, because they poke me or don’t encompass what I’m looking for. It shouldn't feel good to rip off your bra as soon as you get home. It should be something that feels good throughout the day."

You can get your opinions in, too. The survey is live on the Knixteen website right now and available to those in the United States and Canada. All you have to do is enter your email address and it will be sent your way. It takes about five minutes and is all mutiple choice. That's a small price to pay for getting the perfect bra in the end.

The survey will continue throughout Aug. 1, so you can help inspire the teen creators every step of the way. At the end of the giant bra experiment, the bras will be available on the brand's website in sizes 0 to 22. Get ready, because you won't have to wait too much longer to get the best fit of your life.