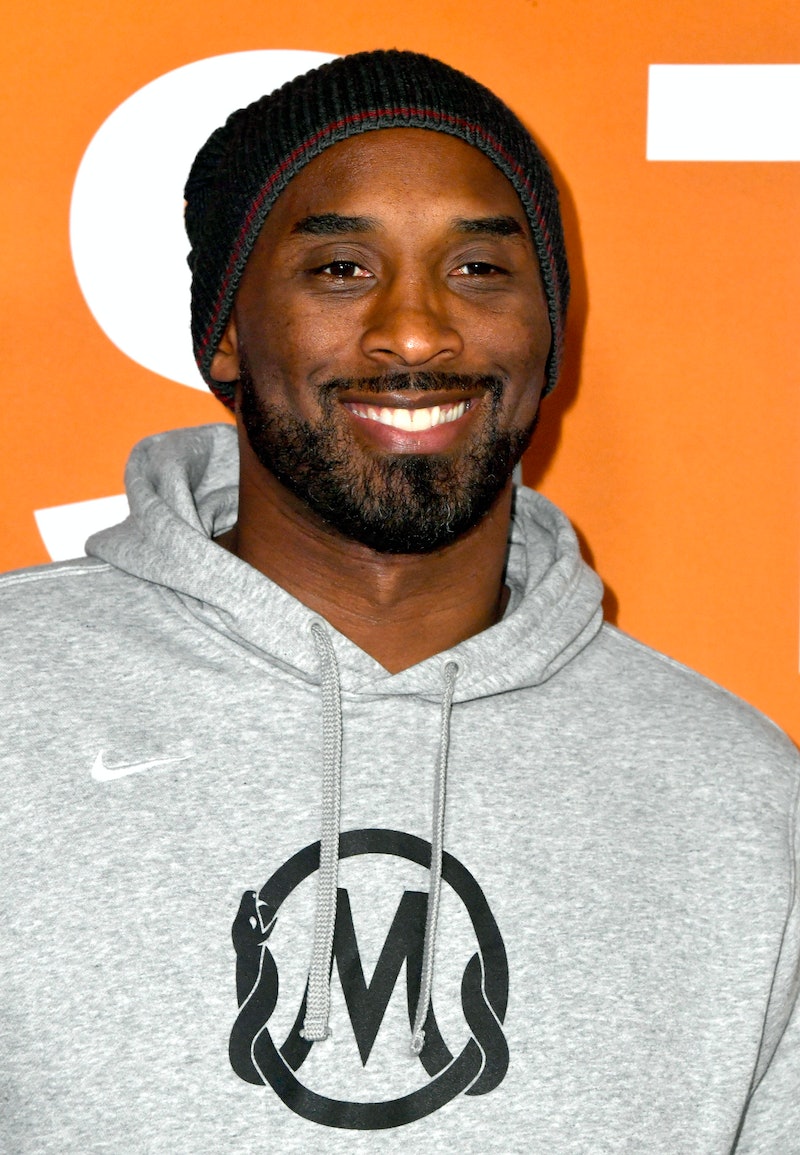 Former Los Angeles Lakers basketball player Kobe Bryant has died in a helicopter crash in Calabasas, California on Sunday, according to reports by the Los Angeles Times, TMZ, and Variety. He was 41. Officials have confirmed to the publications that Bryant was on board a helicopter with five passengers that crashed and burst into flames shortly before 10 a.m. in the Los Angeles County suburb, per a watch commander for the Los Angeles County Sheriff’s Department. Bustle has reached out to Bryant's representatives for comment, but did not hear back at the time of publication. This article will continue to be updated as the story develops.

Multiple fatalities have been reported with no apparent survivors. Bryant's daughter, Gianna Maria-Onore Bryant, was reportedly among the passengers killed in the crash, per TMZ and People. She was 13. Bryant leaves behind wife Vanessa Laine Bryant and their three children, Natalia Diamante Bryant, Bianka Bella Bryant, and Capri Kobe Bryant. Bryant, one of the most prolific athletes of his time, made 18 All-Star teams and has won five NBA championships and two NBA Finals MVPs during the course of his 20-year stint with the Los Angeles Lakers.

In a press conference, the LA County Sheriff's Department stated they believed that there were nine dead in the crash, but could not offer any additional comment.

On social media on Sunday, celebrities and fans alike mourned the sudden loss of the renowned athlete and his daughter. Fellow basketball player Jeremy Lin, actor Jeffrey Wright, musician Lil Nas X, comedian Niecy Nash, and TV personality Khloé Kardashian are among the major names that have reacted to the news on social media.

Lin wrote on Twitter, “Noooo...life is too precious. RIP Kobe.”

UPDATE: Former President Barack Obama paid tribute to Bryant and his daughter in a Tweet late Sunday afternoon. "Kobe was a legend on the court and just getting started in what would have been just as meaningful a second act," he tweeted. "To lose Gianna is even more heartbreaking to us as parents. Michelle and I send love and prayers to Vanessa and the entire Bryant family on an unthinkable day."

On Instagram, Nash shared an anecdote about Bryant and wrote, “Prayers for his family. I met Kobe & Vanessa at Russell Simmons’s house. I said 'what time did you guys have to leave Orange Co to get here on time'? They said 'we took a helicopter' Damn......"

Mindy Kaling paid tribute to “the greatest” and tweeted, “Love and healing to Vanessa and those little girls. God, this is just the worst ever.”

Kris Jenner shared a photo of the athlete with his daughter on Instagram and wrote, "I don't have the words. Every ounce of my heart is with you, Vanessa." And Jimmy Kimmel reflected on Bryant’s charisma and tweeted, “Pray for them, Vanessa, his parents & his fellow passengers' families on this sad and shocking day. We will never forget you Kobe.”

Justin Bieber also shared a tribute on Instagram and wrote, "It can't be. You always encouraged me mamba. Gave me me some of the best quotes that we smile about to this day.! Love you man!"

Actor Aaron Paul also shared a photo of Bryant and his daughter on Instagram and wrote, "Hold your little ones close everyone. Life is beautiful, magical, scary and so fucking fragile." Paul concluded, "Love to you and everyone you have touched. RIP you two."

More like this
7 Things We Learned From Rebekah Vardy's First Post-WAGatha Christie Interview
By Sam Ramsden
What We Know About Where Caroline Watt Is Now
By Catharina Cheung
The Spice Girls & Adele Lead Girl Power Celebrations For Lionesses’ Euros Win
By Sophie McEvoy
John Travolta, Elton John, & More Celebs React To Olivia Newton-John's Death
By Radhika Menon
Get Even More From Bustle — Sign Up For The Newsletter