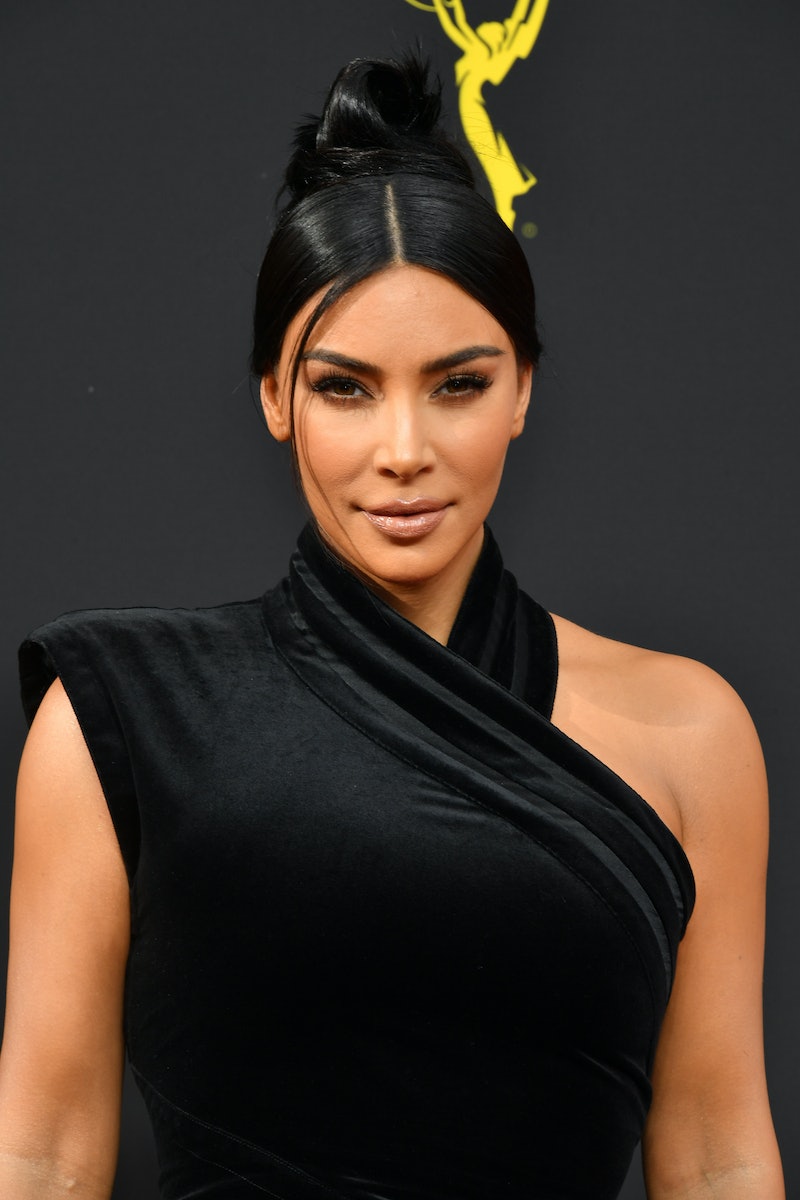 Kim Kardashian is known for collecting — and wearing — vintage designer fashion — but that doesn't mean that her sisters love every one of her '90s outfits. Kourtney Kardashian actually made fun of Kim Kardashian's 2019 Met Gala afterparty dress designed by Thierry Mugler — and the Mugler design team heard it all. And yes, Kim was mortified.

It's a scene many people with siblings know well. On the episode of Keeping Up with the Kardashians which aired on Sept. 15, fans got a behind-the -scenes peek during Kim's fitting for her 2019 Met Gala after party. The dress in question was a latex Thierry Mugler mini dress that dipped down to expose the naval. Kardashian was with the Mugler team discussing alterations when Kourtney video called her sister.

Kim wanted to channel Cher with her after party outfit, and paired the latex dress with Cher's signature accessory: a blue and silver tinsel wig. When Kourtney saw Kim in the outfit, she asked where Kim was planning to wear the dress. Kim jokingly replied that she was thinking of wearing the Mugler mini to Kourtney's upcoming 40 birthday party. To which her sister bluntly answered, "No."

At that moment, Kim was surrounded by the Mugler design team, and since it was a video call, they could clearly hear Kourtney's disapproval. Trying to smooth down any damage, Kim told her sister that the team was planning to add more beading and tinsel to the neckline.

All Kourtney had to say was, “Are you coming as Nicki Minaj?" Kim, growing mortified, told her the inspiration was Cher. Kourtney fired back, “I would say, is it October 31st?”

Kim might have kept her composure while at the fitting, but during one of the show's confessional videos, Kim shared how angry she was for having her dress made fun of.

“I have been planning my Met look since last year and she was just so rude in front of the whole Mugler team. ‘Ew! Oh my god. Is this Halloween?'” Kim said. “It’s all super embarrassing and I can’t even stomach it.”

To make matters worse, Kim learned that Kourtney's stylist was contacting Mugler's manager and asking to work with the designer. “Manfred Thierry Mugler’s manager let us know that, ‘Oh that’s so weird she doesn’t get this vibe, because she’s the one that’s hitting us up wanting looks,'" Kim said. “For her to not only try to use the same designer but then to be so rude, it really hit me the wrong way.”

Kim explained during the confessional that stars have to establish a close relationship with designers in order to borrow clothes, and Kim didn't think that Kourtney appreciated how hard Kim worked to create a close tie with Mugler.

Kim has worn a number of Mugler pieces in the past. Most notably, Kim's 2019 Met Gala dress was a Mugler creation. Since it was a unique design the dress pulled Mugler out of a 20 year retirement, and it took him eight months to create.

In February 2019, Kim wore a vintage 1998 Thierry Mugler evening dress, which was labeled her "sexiest dress" ever. Kim wore the dress to the Hollywood Beauty Awards.

But even one of the world's biggest designers isn't immune to typical sibling tiffs.

More like this
Kylie Jenner Rocked A Very Kim Kardashian-Esque Outfit At Couture Week
By Allie Fasanella
'Love Island' Tanyel's Latex Versace Dress Was Gifted By A Former Islander
By El Hunt
Every Single Thing In Maya Jama’s 'Love Island' Wardrobe
By Darshita Goyal
This 'Bachelor' Contestant Had The Best Reaction To Wearing The Same Dress As Another Woman
By Grace Wehniainen
Get Even More From Bustle — Sign Up For The Newsletter
From hair trends to relationship advice, our daily newsletter has everything you need to sound like a person who’s on TikTok, even if you aren’t.