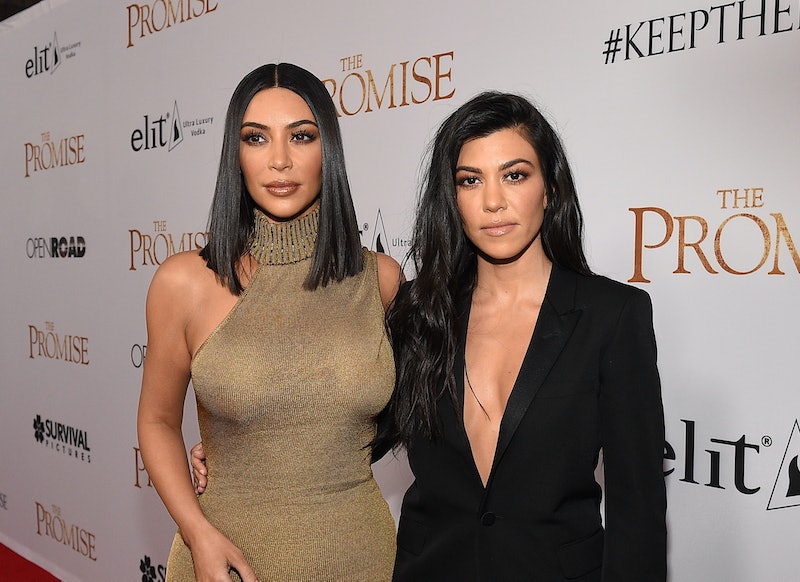 Kim Kardashian and Kanye West celebrated their fifth wedding anniversary on Friday, May 24. And Kourtney Kardashian marked the occasion by posting a photo of her son. Kourtney's throwback photo of Mason at Kimye's wedding includes a sweet story about his role as the ring bearer — apparently, the then-4-year-old quite literally fell asleep on the job.

"My absolute favorite photo from Kanye and Kim's wedding is this one of Mason. We couldn't find him, it was almost time to walk down the aisle and he was the ring bearer," Kourtney wrote in her Instagram caption. "We finally found him asleep underneath a table in the back room in the old Italian fortress where we were all getting ready. My baby is so big now."

Kourtney went on to share another detail from her sister's wedding that wasn't public at the time. It turns out, she was pregnant with Reign during the wedding, even if most of the guests were unaware. "Penelope was just a baby at the wedding and Reign was in my tummy but nobody knew yet," she wrote. "Happy five year anniversary!"

The photo of Mason sleeping beneath the reception table really is too cute. Weddings can be long, stressful days for anyone, children included; it's totally understandable that he decided to take a quick nap on the job.

Kim also shared plenty of photos ahead of her fifth wedding anniversary, including one of Kanye picking out his wedding tux. "A little behind the scenes from our wedding day 5 years ago," Kim captioned the photo, crediting photographer Nabil in the post.

Kim also posted a few photos of herself getting her makeup done the day of the wedding, along with a story about how crunched for time she ended up being. She wrote on Instagram,

"This was my wedding day almost 5 years ago in Italy. We flew in from Paris and our glam was rushed as we were trying to make it on time! We barely got my veil in as I was being pushed out the door so fast to walk down the aisle because Andrea Bocelli had started singing and I couldn't miss it. I had no idea it was really him until I got to the isle [sic] and screamed inside! So many amazing memories."

And, of course, Kim also shared a set of photos of her and Kanye on their actual wedding day, along with a short but sweet caption. She wrote, "5 years ago today I married my best friend."

A lot has changed for the family since Kim and Kanye's wedding. Mason is way more grown-up now. And Reign has entered the world, as have Kim and Kanye's children Saint, Chicago, and Psalm. But photos like the one Kourtney shared on Friday add another layer of fun to the family's memory of the big day.

Of course, Mason wasn't trying to be funny; he was just trying to get in some quick Zs when he could. But he unintentionally brought his mom plenty of joy with his creative nap spot. And Kourtney's photo, along with the others Kim shared, will always be there to make the family smile.