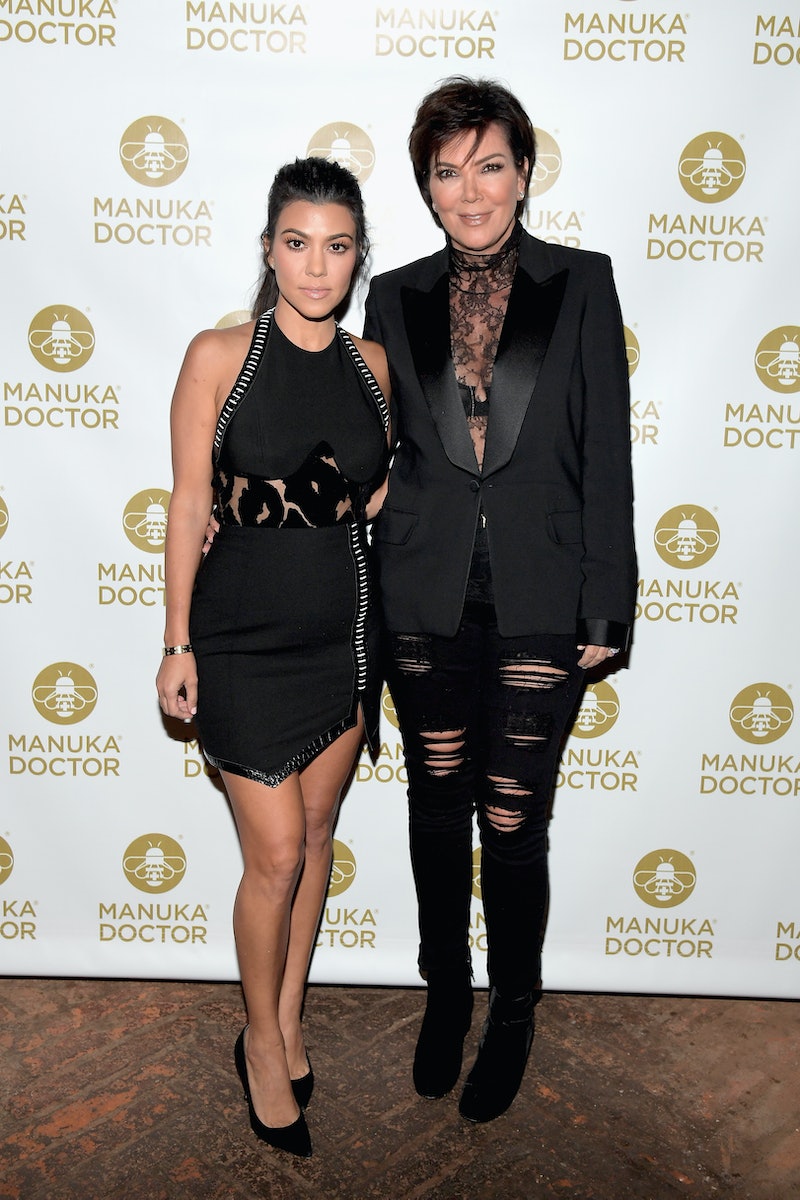 As you're likely aware, Kourtney Kardashian has a very modern relationship with her ex, Scott Disick, and his current significant other. And like many others, the Kardashian-Jenner family has some questions about that arrangement. More specifically, Kris Jenner has concerns about Kourtney's relationship with Scott and his new girlfriend, Sofia Richie, as seen in a sneak peek from Keeping Up With the Kardashians' June 9 episode.

In the clip, the momager — along with Khloé and Kim Kardashian — is taking a look at one of Scott's Instagram posts, in which he can be seen posing with Kourtney and Sofia "three's company" style while on their Mexican getaway. Even though the family is aware that the exes like to go on vacations together for the sake of their three children (Mason, Penelope, and Reign), Kris can't help but relate to the camera that she's a little confused about the situation.

She continued to say, directly to Kim and Khloé, that she's worried that their relationship might lead to someone catching feelings:

"My fear is that she can't make up her mind. She can't pick a paint color — that takes months! I'm just saying because of her indecisiveness, it's going to bite her in the ass. And she's going to be the one deciding way too late that she is in love with Scott and wants to spend the rest of her life with Scott."

Kris also said that she's mostly worried that "somebody is gonna end up really hurt in this scenario."

While it's understandable for Kris to express her concerns over Kourtney's untraditional relationship with Scott and Sofia, if the arrangement works for the three adults, then that's really all that matters. On multiple occasions, they've detailed that their positive co-parenting relationship really is one that works for them.

In a May interview with Paper, the Poosh founder revealed that the mature nature of her friendship with Scott and Sofia is "probably the thing I’m most proud of.” On the topic of vacationing with the couple, she did say, “I don’t think we’ll go on every trip together, but I love that I’m invited.” In short, the three are on really good terms with each other, which, like Kourtney said, is definitely something that they should be proud of.

Even though they're not going globe-trotting together every single time, vacationing as a united family is clearly working for them. In February, Kourtney made an appearance on the Today Show, where the topic naturally turned to her co-parenting relationship with Scott. When asked about their penchant for traveling as a fam, she said,

"We travel together and … I think it’s a good message to show other people. I’m not doing it for that reason, but I think the positive things that we are doing, it’s nice, too.”

The group's positive dynamic isn't one that was formed overnight, though. In fact, as a source told Entertainment Tonight in December 2018, "It took some time for everyone to be comfortable around one another." They continued to say, "Kourtney sees that Sofia is good for Scott, who has been in a really great place, and [she's] happy for the couple."

When it comes to your parents, you know that they can't help but worry about your wellbeing first and foremost. So, it makes sense that Kris would have a good deal of concern for Kourtney's feelings within this "three's company" scenario. But, seeing as though everything seems to be going well for the modern family, the momager probably doesn't need to worry about her eldest child all that much.