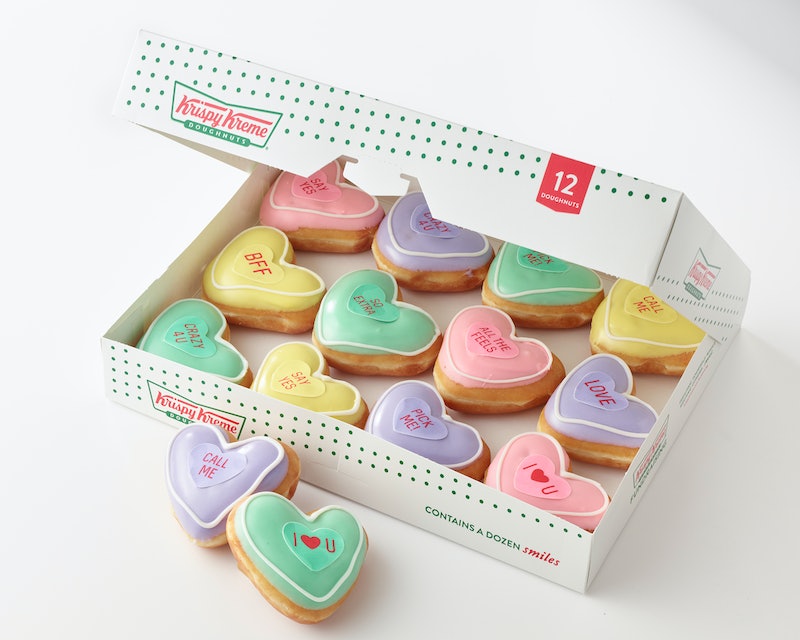 Chief Marketing Officer for Krispy Kreme Doughnuts Dave Skena said in a press release, "Finding the right word can be like, I don’t know….hard. But eating a doughnut is easy. So, we printed the right words on the doughnuts for you so you can’t mess this up."

And if you really do want to #SayItWithDoughnuts (yep, these doughnuts have a hashtags), you have a wide variety of messages to choose from, and they're not all about significant others or crushes. The phrases include "BFF", "All The Feels", "Call Me", and "Pick Me", which, while it's a classic conversation heart message, does come off more like it's from the doughnut's perspective. There are over a dozen messages available, which means that even if you get a dozen doughnuts, you won't see all of them. How mysterious.

The Conversation Doughnuts will be available at participating locations from January 30 through February 14. On Wednesday, February 6, Krispy Kreme Rewards members can get a free conversation heart doughnut with any purchase. Might I suggest coffee?

Krispy Kreme has not had Conversation Doughnuts in the past, but they have featured other special doughnuts for Valentine's Day. Last year, the chain had its "classic" Valentine's Day lineup — the Sprinkle Heart Doughnut, Happy Heart Doughnut, and Chocolate Iced with Sprinkles Doughnut — along with an Oreo Cookies & Kreme doughnut. In 2017, they had heart-shaped doughnuts with red and pink designs, including sprinkle and smiley faces.

But, in 2019, Krispy Kreme is going with conversation hearts and that's because Sweethearts, the brand name of the popular candies, are not being released this year. As reported by Marketwatch, Necco, the company that made Sweethearts, went bankrupt and Sweethearts were acquired by the Spangler Candy Company in September. The thing is, five months wasn't long enough for Spangler to get it together to produce the candy hearts by Valentine's Day.

Spangler Candy Company chairman and CEO Kirk Vashaw told ABC News in a statement, "We wish we could have Sweethearts out for the 2019 Valentine season, but it's just not possible. We are committed to making sure these brands meet consumer expectations when they re-enter the market. Doing it right takes time."

Sweethearts have been around for well over 100 years. The hearts with sayings were introduced in 1902, according to Smithsonian, but the candies were around even longer in different forms. Some of the sayings, like "Kiss Me", "Be Mine", and "Be True" were there from the start. If you have a tradition of picking up Sweethearts, it's a bummer that you won't be able to this year (unless you can find some old ones), but let's be real, doughnuts taste a lot better, anyway.