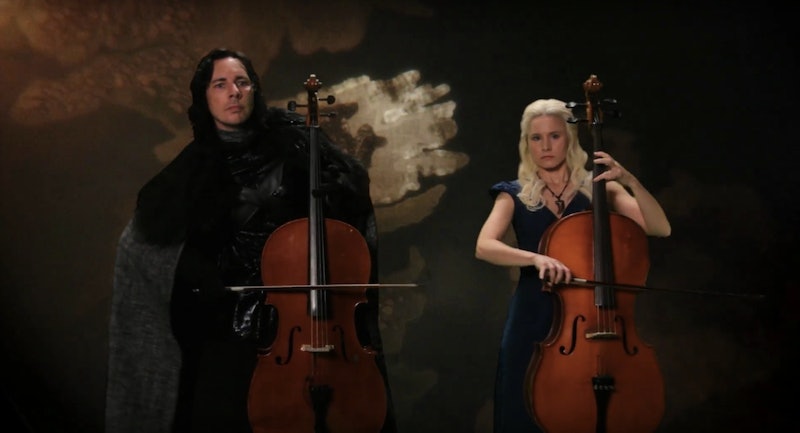 Kristen Bell and Dax Shepard really, really want you to know they love Game of Thrones. As well-documented super fans, the beloved couple has been vocal about their obsession with the wildly popular fantasy series. But their Game of Thrones video hits a whole new level of commitment.

In a one-minute clip posted to the YouTube account of Dan Shepard — where, some may remember, they also shared their ode to Toto's "Africa" — the two appear decked out in GoT-themed attire while playing the show's theme song as its opening credits play on in the background. They start out in regular clothes — Bell in a flowy top and jeans, Shepard in a black T-shirt and beanie — but quickly transition into various medieval-looking garb and full-blown armor.

To top it all off, the clip is accompanied by an enthusiastic caption:

"Words can not express our horniness for the Game Of Thrones Premier[e]. Hopefully this video will. #GOT #GameOfThrones #KristenBell #DaxShepard #ShowYourGOTLove THANK YOU to THE GOOD PLACE ANGELS!!!!!!!!!!!!!!!!"

The video, of course, is tied to Game of Thrones' upcoming Season 7 premiere, which airs July 16 after a year-plus hiatus. That this is how Bell and Shepard chose to celebrate isn't really surprising: Last spring, they showed up to the Season 6 GoT premiere in matching tank tops and faux “Ours is the fury” neck tattoos.

This year apparently called for more, which means they'll need to really step it up when GoT's eighth and final season rolls out.