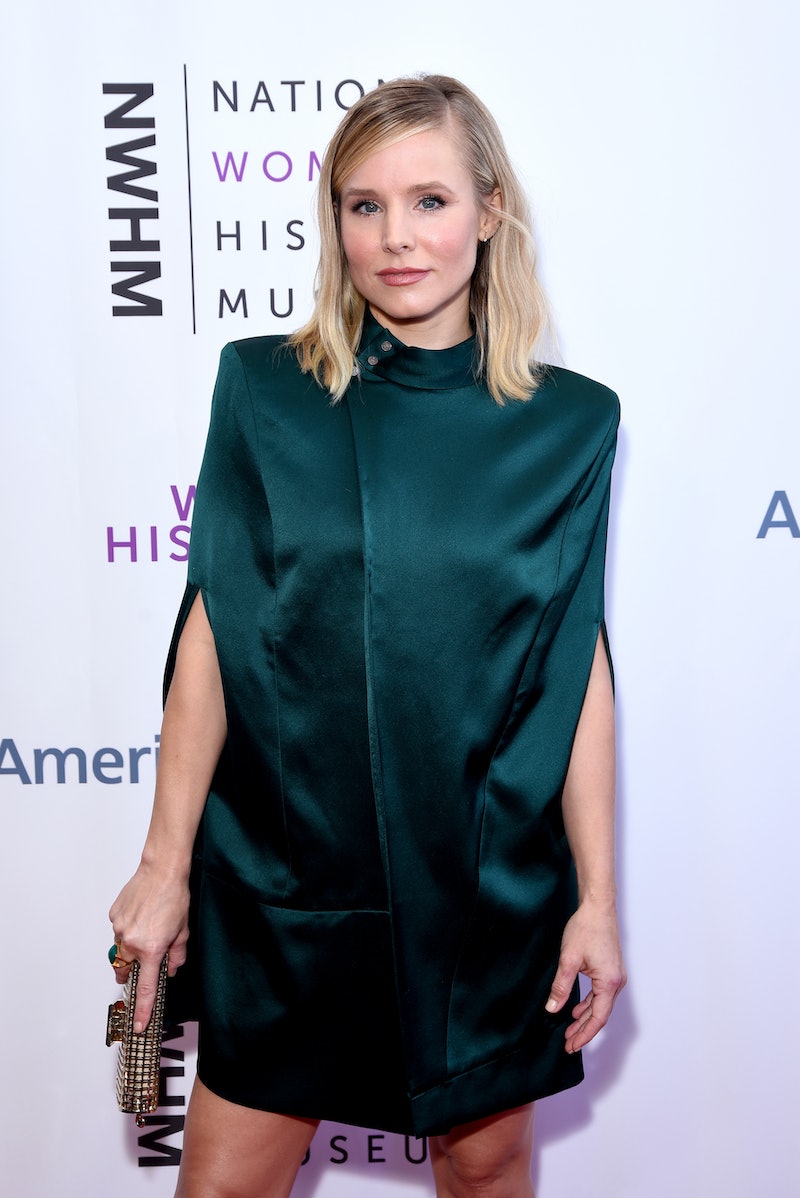 It wasn't apparent to anyone around her, but when Kristen Bell was honored at the Women Making History Awards on Sept. 15, she was sweating profusely under her dress. "I am currently, you can’t witness it, but this cape dress is absolutely saturated to the line of my underwear with sweat," she says on the red carpet. "I am so sweaty and nervous to be here."

Recognized by the National Women's History Museum for her ferocious work and activism, Bell was actually that anxious about getting an honor among a group of peers that included Kathy Bates, Gabrielle Union, and Black Lives Matter co-founder Patrisse Cullors. (The Women Making History Award is "given to a select group of women who have made a significant contribution to their field and serve as an inspiration to women everywhere, according to the official website.)

"On an internal level, I’m coming to a world of very smart women in which I do not feel I fit," The Good Place star admits. "But maybe that’s the point." At the event, Bell opened up about her anxiety over fitting in and how it pushes her to achieve more.

"Maybe my job isn’t to be as smart as these women, but it’s to show that all you have to do is try," she says.

Approaching the stage to receive her honor, Bell was her authentically goofy and imperfect self. She cracked jokes, was openly confused about where to sit, and made the whole room laugh. She wasn't trying to appear smarter or better than anyone else, and her realness is what made her shine, even if she did feel inadequate in the moment underneath it all.

"This morning, I was panicked about trying to sound smart, trying to just have access to the words I needed in my brain," she admits. "My brain is like a Rolodex that’s constantly in the wind... I rely on being goofy and changing the subject." It's easy to forget that someone like Bell, who's poised, accomplished, and has such a high-profile and respected reputation, would also have such insecurities.

"I never show you guys the introvert, but I need it and I’m OK with needing it," she says. "Sometimes it’s literally going in my closet and reorganizing my underwear drawer. Just to get my brain centered." Overcoming those internal anxieties and putting herself out there to hold her own in a group like this one is a victory in and of itself.

Bell takes her challenges and triumphs moment-by-moment, and says that avoids thinking about her own legacy and how it'll fit in the big picture.

"I think it’s too broad and I think it’s dangerous," she says about pressuring yourself to leave a mark on history. "I think it’s just as dangerous as Googling yourself. You’re perfect just the way you are." To Bell, it's the small life choices that can carry more weight than the huge gestures. "I believe that every bit of self-esteem comes from esteem-able acts and from internal stuff," she says. "Sort of on an AA level, it’s everyday. 'How do I want this day to go? How do I want to perform or act or be or exist today?' I also on a daily give myself what I give my deathbed test. Which is: What would I want this memory to be like on my deathbed?"

For Bell, making impact can mean offering a helping hand or giving a few bucks to a friend in need. "Do I wanna die with a little more money in my bank account, or do I wanna help someone?" she says. And just like that, you can change the world... even in a sweaty dress.

More like this
On 'The Handmaid’s Tale,' Christine Ko Fights Back
By Gretchen Smail
Jinkx Monsoon Is About To Get Real Sketchy
By Sam Ramsden
The New Bachelor Will Be Announced Next Week & Here Are The Top Contenders
By Grace Wehniainen
Mike Flanagan Teases 'The Midnight Club' In This Exclusive, Creepy Clip
By Grace Wehniainen
Get Even More From Bustle — Sign Up For The Newsletter