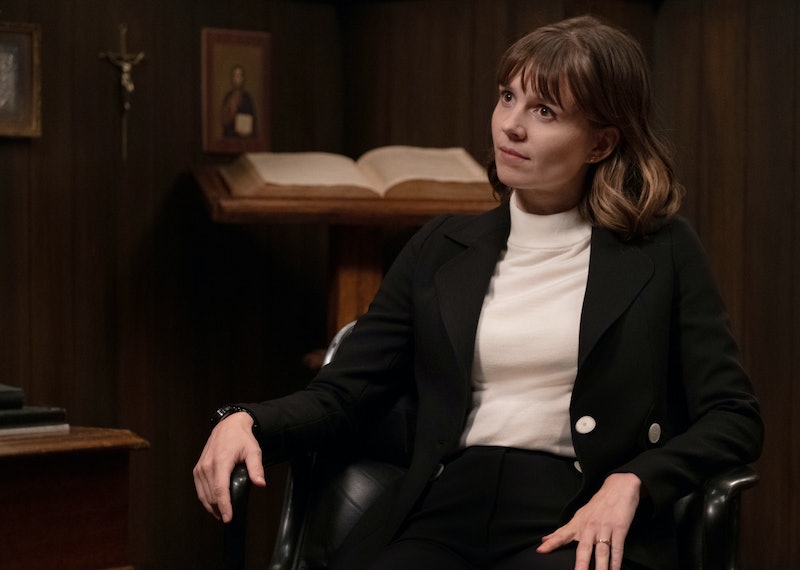 The characters of CBS's supernatural drama Evil don't just hunt demons, they're also seeking to understand what causes people to commit immoral acts. While many of the show's characters focus on studying the evil ways of supernatural beings, Kristen Bouchard, played by Katja Herbers is more skeptical of hard-to-explain phenomena. While there's no actual expert witness-turned-demon hunter that the show's writers used as inspiration, the character of Kristen Bouchard is based on the show's creators, Michelle and Robert King, conflicting feelings about faith.

According to The New York Times, Robert is a "devout Catholic" who regularly attends church, while Michelle is an agnostic Jew who believes that people do things because of their real life, tangible circumstances, much like Kristen's character. Meanwhile, Robert is more like David Acosta, the priest in the show played by Mike Colter. Robert says, "there is a component that is beyond us, that is outside of our physical bodies, that encourages some people to do evil.”

So while Kristen Bouchard isn't based on a real life demon hunter, she is the personification of Michelle's beliefs. In an interview with The Wrap, Robert added that while he believes in demonic possession, it's also just good for story telling.

Which is why the show is so rooted in philosophical debate. "Given that we created two characters that have very different ideas, it is important to me that they listened to each other respectfully, and that they feel comfortable expressing those opposing viewpoints,” Michelle said in the same interview. “It feels like there’s not a lot of listening going on in the world.”

Robert added that they tried to fill their writers' room with people who held all sorts of beliefs about religion and secularity in order to make sure the dialogue remained front and center. And so that it didn't go totally off of the rails. "The last thing anybody wants to do is turn on the TV and be preached at. It’s much better that you have people in the midst of questioning," he said. “What we really wanted to show was parallel tracks, where you could look at present day phenomenon and you could interpret it scientifically and supernaturally. We didn’t want it to be like X Files where it immediately acknowledges there are aliens and strange things.”

That doesn't mean that there isn't a lot of demon hunting on this show, though. As much as the series is rooted in various sides of a conversation about what makes someone (or something) evil, the suspense and jump scare level is real. So come for the demons and stay for the religious theories — just don't go looking for an actual demon hunter named Kirsten.