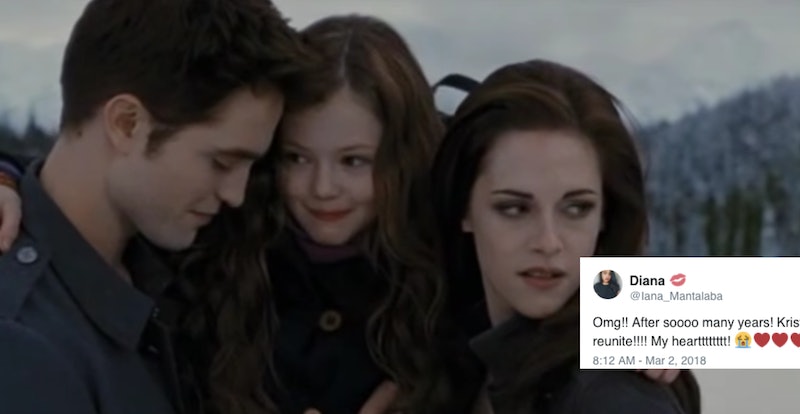 A Twilight reunion for the, well, books took place on Wednesday, Feb. 28. While attending the Chanel Beauty House pop-up in Los Angeles, Twilight co-stars Kristen Stewart and Mackenzie Foy reunited and took some pictures to prove it. As Cosmopolitan reported, a little over five years after The Twilight Saga: Breaking Dawn Part 2 hit theaters, the actors who portrayed Bella Cullen (née Swan) and Renesmee Cullen posed for the cameras together at the event. According to Cosmo, this is the first time the two have been together since their Breaking Dawn days. Understandably, this moment really spoke to the hearts of Twihards everywhere.

In both of the feature films based on the novel Breaking Dawn, Foy played Renesmee, the daughter of Bella and Edward Cullen. To think, in only 2012, Foy was telling Glamour magazine that she hadn't actually watched all of Breaking Dawn Part 2 because her mom asked her to keep her eyes covered during certain parts. Less than six years later, Foy and Stewart are attending the same Chanel event, they're almost the same height, and time is a wild thing. Also? The Twilight casting department really nailed this one; Stewart and Foy genuinely look related.

Mini Twilight reunions pop up every now and again, and it's always cause for a Twihard celebration. As Just Jared reported, Ashley Greene and Kellan Lutz posed for a picture at an Oscars party in West Hollywood on Thursday. Last year, Entertainment Tonight reported that Stewart and Taylor Lautner hung out at get-together in L.A. And as Hollywood Life pointed out, Stewart, Anna Kendrick, Dakota Fanning, and Nikki Reed all attended the Elle Women in Hollywood Awards in 2016. And so the list goes.

And now, we have a Mother Cullen and Baby Cullen reunion. It's a very big deal.

Ugh, these pictures are so good. Someone call Tyra Banks, because the Cullen ladies are smizing like whoa. They are bringing it.

You want some outstanding fan reactions that truly sum up how special and perfect and lovely these pictures are? You've got it.

OK, First Of All? This GIF Is Almost Too Much To Handle

That blast from the past is beyond. Just beyond.

When Word Got Out About This Reunion...

...Twihards demanded photos. Fortunately, the photos made their way onto the internet. And yes, the photos really delivered in a big way.

The Emojis Are Flowin'

So many hearts, so many tears.

Hearts have gone soft, but as for the emojis? Oh, they're still going strong.

Yeah. It's already been dubbed the best thing to happen this year.

This Reunion Is Bringing The Joy

What a true gift.

Some Suspect Magic May Be Involved

*Looks at pictures again.* Seriously though... is this actual sorcery?

The Nostalgia Of It All Is Almost Too Much To Take

This surprise mini-reunion really is quite a delight.

All Of This Is True & Terrific

Yes. Yes they did and yes we did.

This Cullen mother-daughter photo series sure does sparkle like a vampire's epidermis on a humid autumn day. And maybe, just maybe, if we keep wishing as hard as we can, there will one day be a full cast reunion, in all of its sparkly wonder.