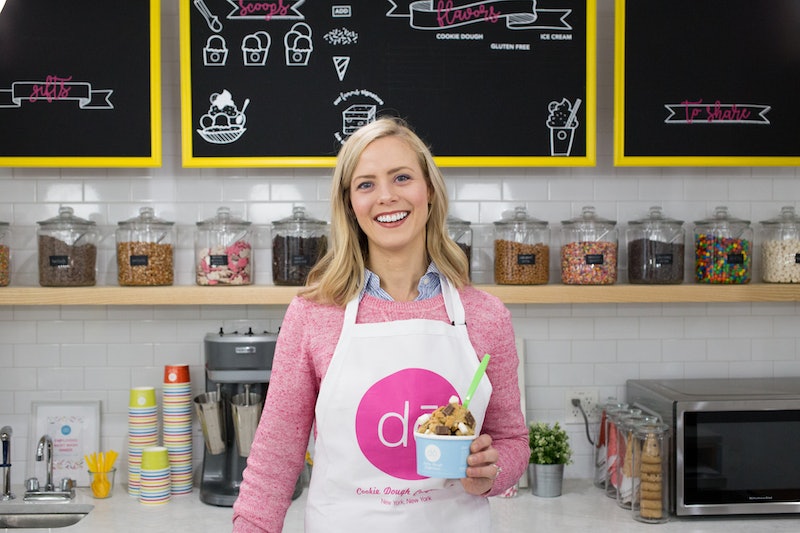 You can't eat cookie dough. You'll get sick. This is the truth every child has learned at some point in their lives. They've felt the crushing weight of the reality that the most delicious treat imaginable — gooey, unbaked cookies — are a forbidden dessert that should be left only to those willing to risk the after-effects. But for one entrepreneur, that rule was one made to be totally and completely broken. Kristen Tomlan opened Dō, the cookie dough shop that dropkicks the old adage and lets customers decide how they like their dough — in scoops with sprinkles, on either side of cold vanilla ice cream, in a milkshake, or even baked into actual cookies.

Before she became the woman who inspires legions of people to stand in line for hours — like, up to four entire hours — in line to try the dō at her New York City ice-cream style cookie dough shop, she was working in marketing. A life-changing experience woke her up and convinced her to finally give her dream a shot — even if it seemed goofy, or outlandish.

In a conversation with longtime friend Stacy London, Tomlan explains how she got to the moment where everything changed — and it's why she's one of Bustle's 2018 Rule Breakers.

Stacy London: So tell me a little bit about how this all came to be. You have experience in marketing. How did you apply that to this?

Kristen Tomlan: I originally had the idea 'cause I was with a bunch of my girlfriends. We went to a cookie shop where they sold baked cookies and we decided to leave with just their cookie dough in hand. So, because it wasn't acceptable for us to sit in this cookie shop and eat their dough, we went to the car, and passed the tub around. That was the moment where I thought, “Why isn't anyone doing this?”

Everyone thinks that once you're up to be your own boss and do your own thing, you have all this flexibility and freedom. I have less time and less freedom and more responsibility than ever. But it's also more rewarding every step of the way.

SL: How did you go about the research and development for something like this?

KT: I did a lot of eating — a lot of cookie dough. The first thing I knew everyone had been told [was] don't eat the cookie dough because it contains raw egg. That was the first hurdle we had to jump over: figuring out a way to replace the egg in cookie dough to make sure that it's safe to eat. So we experimented for months and months and months with every single egg substitute under the sun. Flaxseed this and cornstarch that, but none of them were as good as the original. So then began my quest on this idea of finding an egg that was ready to eat [while raw]. Once I found this egg, I was able to create these recipes.

The next hurdle was the flour. A lot of people don't know that raw flour can also harbor bacteria.

KT: It is a raw agricultural product and — I'm gonna explain it in the least gross terms as I can — it's growing in the fields. There are maybe birds flying over, critters running into the field and then once it gets milled, it goes straight from the field to your counter. There's no process that kills any bacteria. The risk is small, but there is still a risk with eating those raw ingredients.

I know how much work it took me to get to this point, so anybody coming to just steal a recipe, that is the smallest, smallest bit of what we do that I'm not really concerned.

SL: I'm sure being sued is not the first thing that you want to have happen.

KT: No. Not the first thing. So then it was trying to find this flour that was safe to eat.

SL: What is the percentage of being a rule breaker that involves problem-solving?

KT: I feel like I'm not really an entrepreneur. I'm a serial problem solver. It's not about figuring it all out. It's figuring out one thing at a time. In the beginning, I had no idea how to start a business. I had no experience, but I knew how to bake and I knew about branding.

[I started thinking:] Why are their customers there? Why are they coming back? They're here to experience it all. They come with their friends. They share their stories about their families and they're indulging in this nostalgic thing that makes them really happy. So I wanted to allow them to enjoy that experience from the second they walked in the door.

SL: Do you think in the digital age and the fact that we're not even in the same room when we talk to each other anymore, that this is sort of a tangible opposition to that, where the experience is meant to be shared?

KT: You're doing it. You're present. Yeah. And for so many people, it brings them back to this much simpler time of licking the [cookie dough] bowl with their mother or their grandmother, whatever the case is. It reminds them of being a child. It's kind of anti-everything.

SL: Your store's open kitchen. It reminded me very much of Willy Wonka, where you're getting this kind of sneak peek. A lot of companies — bigger companies — have no interest in that, but your relationship with your customers is that you're inviting them into the actual experience.

KT: Yeah, and not only can they see [the process], but they can [learn it]. Earlier this year, we started offering baking classes and cookie-dough-making classes. So we're inviting you physically into our kitchen to get your hands dirty, use the mixer, learn about what you're doing and why you're doing it, the chemistry of baking, and ultimately going home with these creations that you made.

SL: Does that frighten you to think, “I'm teaching my consumers how to make what I make”?

KT: No, it doesn't. It makes me happy because I get to share that with other people. I'm not concerned about them [taking over]. They're [not] gonna take this one recipe and then go build an empire. I know how much work it took me to get to this point, so anybody coming to just steal a recipe... that is the smallest, smallest bit of what we do, so I'm not really concerned.

SL: I always felt like the idea of succeeding at something means you worked really hard, and the only privilege to that is that you get to work harder. Would you agree with that?

KT: Yes, everyone thinks that once you're up to be your own boss and do your own thing, you have all this flexibility and freedom and whatever the case is, and that is the opposite. I have less time and less freedom and more responsibility than ever. But it's also more rewarding every step of the way.

SL: What's a rule that you think people don't break enough in the entrepreneur space?

KT: You know, because you've known me for awhile, that I went through kind of a health scare many years ago. And, I think that — not that I'm by any means thankful about that experience, because it was terrible and traumatic — but I think it gave me a different perspective on life that other people don't necessarily have if they haven't faced real [fear]. It was serious and I think when you go through something like that it really does change your outlook of what you're doing and it's the time where you can really access inside what is going on with ultimately your happiness.

I either want to do this or I need to stop talking about it. I either need to get it out of my mind or I'm giving it a hundred percent.

SL: Well, if I remember correctly, when I first met you, we talked about this a lot. And, you told me that you went back to branding and marketing after being sick, and then it took you a nanosecond to be like, no more of this. I'm ready to kind of go with my dream.

KT: I kept saying when I was sick and when I was recovering, I just want to go back to my normal life, I just wanted to go back to what I was before because my whole life was upside down. And then, over the course of many months and recovery, I was able to get back to close to that normal life. But then, once I was in that normal life, I was like, "Is this it? I remember this being more fulfilling than I feel like it is now." And it was nothing wrong with my job or with anything with my life. It was great once I got past the health issue, but there was something inside of me that was kind of asking myself "Is this it? Is this how I'm going to live the rest of my life or am I going to do something that at my core is like ultimately makes me happy?"

KT: "If I had extra time." I mean I made a million excuses too. I had this idea two years before I even started putting pen to paper and thinking about it as a business. [It was] a short amount of time, but also that time that I was constantly thinking about it, but not doing anything about it. And that was one of my biggest pet peeves. Those people that drive me crazy — they talk about wanting to make a change or how terrible something is and they have control over the situation and they just don't do anything about it.

SL: That would be me, I'm raising my hand for those who can't see this. I am that person. I have been working on my book forever, and ever, and ever, and I'm writing it slowly, but it's like, come on already, I've got to get it finished.

KT: I wasn't doing anything, and I didn't want to be that person who doesn't do anything and just talks about doing something but never does it, because I was embarrassed when I would tell friends about the idea. And then I would see them a couple of months later or whatever, and they'd be like, "How is that idea going?" And I would be like, “It's still an idea.” And I was like, I don't want to be that person. I either want to do this or I need to stop talking about it. I either need to get it out of my mind or I'm giving it 100 percent.

More like this
The Indigo Girls Taught Me Queer Relationships Could Be Messy, Too
By Hannah Soyer
These 4 Zodiac Signs Have Naturally Inquisitive Souls
By Nina Kahn
The 7 Best Microwavable Coffee Mugs
By Kirsten Bakstran
Pepsi’s Festive Flavour Is Finally Coming To The UK
By Sophie McEvoy
Get Even More From Bustle — Sign Up For The Newsletter