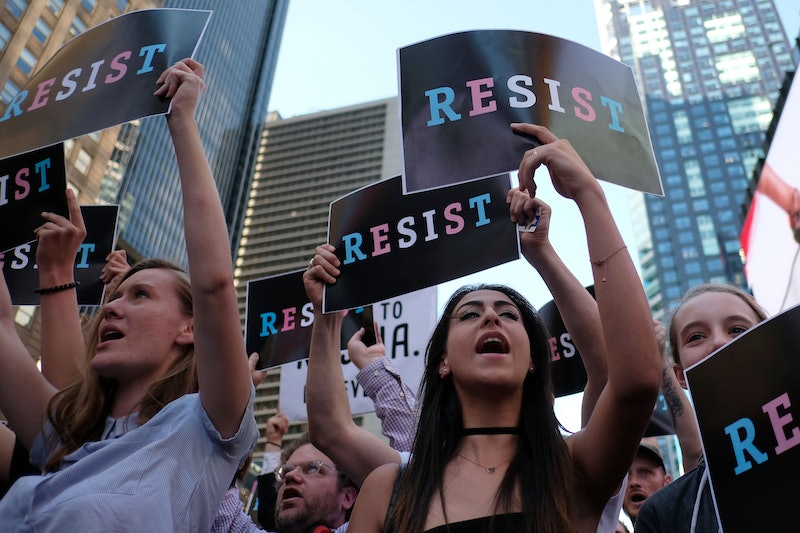 When I write fantasy, I’m writing about real things. There is no tragedy in my books that hasn’t happened in the real world. So you won't be surprised to learn that the primary villain in my fantasy novels is an unbalanced king. He’s narcissistic and egomaniacal. He needs constant praise and affirmation, toadies who both admire and fear him. He believes all his ideas are good ideas because he’s psychologically incapable of considering the possibility that he might be wrong. But most of all, his one big characteristic, if you were only going to say one thing about him, is that he lies.

He has the superpower of being able to tell lies that people automatically believe. He’ll say something that is prove-ably a lie, like, for example — he never actually says this, but just to give you an idea of how it works — he might say that more people came to his coronation than have ever been to any coronation before. Period. And unless you’re wise to his bullsh*t and mentally guarded against him in a serious way, you will believe what he says. And it spreads. When you go on to repeat that lie to other people, they will believe it too. It’s part of his power. So, he creates an artificial culture of deceived people who support him.

And unless you’re wise to his bullsh*t and mentally guarded against him in a serious way, you will believe what he says. And it spreads.

Also in my books are main characters on quests for their own personal truths. Young and tired and frightened, but brave, each one pushes back against the king’s power. They live in a world where a person can have a power like this king’s. They know that “truth” is a complex concept, that the question of what is “right” is complicated. They know that they’re susceptible to the deceptive power of this villain. It’s a danger to them; it will confuse and muddle them, and make them forget what’s true and what matters. This is the destabilizing power of constant lying, isn’t it? You begin to feel a little crazy, and like maybe you’re the one who’s wrong.

They know that “truth” is a complex concept, that the question of what is “right” is complicated.

Many of us are brought up to believe that the world around us, and the life around us, whatever is happening, is normal, and right. If we’re being abused, we may think abuse is normal, and even that we deserve it. If our parents or our culture have restrictive or harmful ideologies, we might not notice them taking hold of us or oppressing us; they might just, by default, become our truths. It’s why people can be stirred by racist or misogynist or homophobic ideologies, and develop really dangerous and damaging attitudes, without it occurring to them to dig deeper, and question what’s happening inside their own minds and hearts. When something is in the air from the moment we take our first breaths, it becomes our reality.

My main characters have a few different techniques: One writes the truth down, so she’ll have evidence. Another remembers whom she loves, and that snaps her out of it. Yet another retreats—to a place where she can center herself, and get back to her own truth.

I'm not sure if there is any more important skill I can give my characters than the ability to question things, to learn to think for themselves, and to decide for themselves what's right. And again, this is because I don't really consider myself to be writing fantasy. I’m writing stories for the real world.

I'm not sure if there is any more important skill I can give my characters than the ability to question things, to learn to think for themselves, and to decide for themselves what's right.

Because, in this world, a man might say, “No one respects women more than I do.” Or, “I have great respect for Mexico. I love the Mexican people. I work with the Mexican people all the time. Great relationships.” And we can think to ourselves, I’m so relieved he said that, because it’s important to me that he respect women and Mexican people, and now I can get behind his policies. Or, we can think to ourselves, wait a minute. I have a different understanding of what “respect” means. Respect isn’t just words you say. It’s action you take.

I write stories about people who are learning to trust their own internal fact-checkers. Truth is the only way through this messy life.

Listen to your internal fact-checker. Test yourself. Test anyone and anything that sets off your sensors. Use it liberally.

Truth is the only way through this messy life.

Why? Because the villains aren’t whom the story is about. They aren’t the heroes. The heroes are young and tired and frightened, pushing back against power, on quests for their own personal truths. Often with very little idea what is going on or what the right thing is to do, but always fighting. Always stretching themselves, trying to do the right thing.

What’s happening right now in this country is not his story. It’s ours. We’re the heroes. We can use the tools at our disposal. We can write and think and explore. We can talk to people and test our ideas. We can strive to get to the truth, always remembering that we might sometimes be wrong about something. We can go out in the world and make our thoughts visible.

When white supremacists and fascists assemble in groups, we can assemble in even larger groups, and shout even louder, “NO.” We can remember that all people are worthy of love, and we can keep sight of what matters. We can protect each other, support each other when we get tired or confused. We can look for other people who think, who figure it out, and who separate lies from truth, and push, and fight, and keep saying no, until they win.

Because this is our story.

Kristin Cashore is the author of the Graceling series and the forthcoming Jane, Unlimited, out Sept. 19.