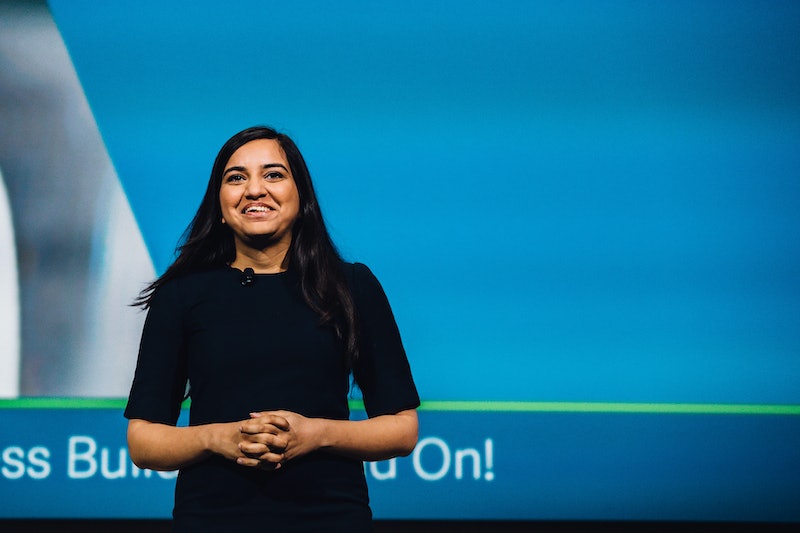 You are likely very familiar with artificial intelligence, even if you don't recognize it as such: all your tech assistants, from Siri to Alexa, run on the technology, but just because it's ubiquitous, doesn't mean it couldn't be made better: more inclusive, more diverse, and more useful. And no one is in a better place to figure out how than Kriti Sharma, Vice President of AI at SAGE, and one of Forbes' 30 Under 30.

"When I was 15, I got some exposure to a government research facility where a scientist could use his voice to make a computer do something," Sharma tells Bustle. "That was magical for me. How awesome would it be if I had my own personal machine that could understand my voice?" Fourteen years later, interconnected smart homes powered by AI are becoming an increasingly mainstream use of technology. But for those who haven't adopted AI's ubiquity, the technology can still be a scary thing. And that is an unfounded bias Sharma hopes to address in her work. "Either we get too scared and don't really embrace the benefits, or we start to become sensible and get past the hype."

To start this process, Sharma thinks we need to change the way we think about and design AI. For one, we need to understand that it isn't there to replace humans. It's there to make life easier — but often it's gone in different directions. "Take Slack," she tells Bustle. "It's supposed to raise productivity by reducing the amount of time we spend on email; but it turns out we are spending more time on Slack than we were on email. We’re realizing that we’ve got to think about humans in the design process, not about products."

But it's not just about how AI is used; it's about how it's created. Sharma is a prominent advocate for ethical AI and diversity in artificial intelligence in general, because what we put into AI shapes what we get out of it, and if it learns prejudice — even unintentionally — it's going to replicate that in the world. Most artificial intelligence at the moment, from basic chatbots and autocorrect to bigger projects like IBM's Watson, is based on a process called machine learning, where systems learn and develop based on all the new information they encounter. Think about how Google search fills in your searches, or Alexa gets to know your preferences. The problem? Machine learning without boundaries isn't necessarily a good thing.

"Just like you would teach children values, AI needs to be given a set of values, too," Sharma tells Bustle. "It’s important because AI learns on its own." If not, you can see the same kind of regressive bias that humans are prone to in AI — which has happened across different platforms, from chatbots that learned racist behavior from its interactions, to photo-tagging systems that weren't trained to recognize non-caucasian skin tones.

But, Sharma says, "it’s not just the data; it’s also the design." She cites the fact that most personalized AI assistants, like Siri or Alexa, are designed to sound female. Male-coded AIs, by contrast, tend to be business-focused, like IBM's Watson. "Children are growing up in houses that are powered by smart assistants and learning that it’s OK to bark orders at a female voice without having to say 'sorry', 'thank you', or 'please'." In a world where AI is becoming more and more powerful, these ingrained biases can be potentially damaging.

So how do we fix it? Design it ethically from the beginning, says Sharma. "One of the biggest reasons we have these problems," she tells Bustle, "is that when you don’t have diversity it’s hard to build diverse products." More women and minority at the table from the beginning, Sharma believes, will make better products — and more inclusive data sets for AIs to learn from.

The future of AI, according to this vision, doesn't necessarily involve robots taking over human jobs. "It’s not about replacing the human advisor; it’s about giving them help," she says. But she does believe that everybody should get the chance to get involved with AI, from the ground up. "There are so many opportunities for people, from freelancers to small business owners, who can benefit from it," says Sharma. "I want to give everybody the power to benefit from this technology and also design it in a very diverse way." Whether you're a blogger or part of a big company, expect AI to be coming to help out soon.