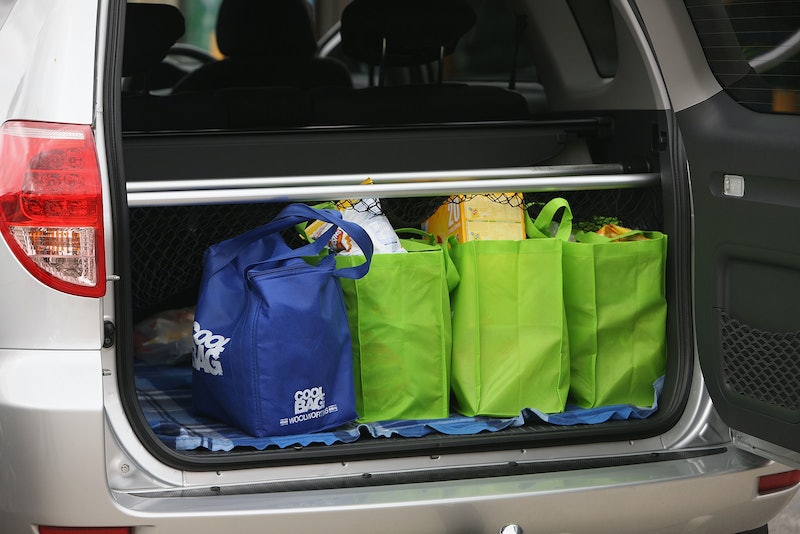 If you shopped for your usual haul of groceries this week, you may have been asked to choose between paper or plastic bags at checkout. But for Kroger shoppers, things are about to change. Kroger is getting rid of plastic bags at all its locations by 2025 in order to cut back on plastic waste, according to BuzzFeed, and this is major good news for our environment. CBS News reports that Kroger typically orders about 6 billion plastic grocery bags per year. As the nation’s second largest grocery chain after Walmart, the effort to eliminate single use plastic bags promises to have major impact.

NPR reports that the plastic bag phase-out will kick off at Seattle-based QFC markets, which is slated to fully oust the bags by 2019. Kroger Co. companies also include Ralphs, Harris Teeter, Pick ‘n Save, and Food 4 Less. NPR further reports that the Kroger corporation owns over 2,700 grocery stores in 35 states. Not only is the ginormous grocery chain committed to ditching single-use plastic bags, but the company is also encouraging shoppers to invest in eco-friendly reusable totes. Mike Donnelly, the chain’s executive vice president and COO, was quoted in a recent press release saying, “We listen very closely to our customers and our communities, and we agree with their growing concerns. That’s why, starting today at QFC, we will begin the transition to more sustainable options.”

It’s no secret that single-use plastic bags are a major source of environmental waste. According to the Environmental Protection Agency (EPA), plastic bags don’t biodegrade easily, so they just kind of hang around forever, clogging up our landfills, oceans, and waterways — and harming marine life who end up eating the plastic. The EPA further reports that over 380 billion single-use plastic bags are used in the United States every year. Not only is that a huge amount of plastic that doesn’t break down easily, but the EPA further notes that 12 million barrels of oil (fossil fuels) are also required to make that many bags.

The Center for Biological Diversity also reports that while the average family in the Untied States takes home upward of 1,500 plastic shopping bags per year, only 1 percent of those bags are returned for recycling. The Center for Biological Diversity states that it takes at least 500 years for a plastic bag to biodegrade in a landfill, where they still don’t actually fully break down. Single-use plastic bags photodegrade over a (very) long stretch of time — meaning that they eventually become microplastics that continue to absorb toxins and pollute the environment.

CBS News further reports that Kroger’s efforts to cancel out plastic shopping bags is part of a broader movement on the part of many major companies, like Starbucks and IKEA, to reduce waste and address our global plastics crisis. And many major cities across the globe are also making strides toward eliminating plastics through plastic straw bans, which as many in the disabled community have noted, disproportionately affects disabled people.

BuzzFeed further notes that while some Kroger shoppers have expressed mixed feelings about the new plastic bag ban, most folks are stoked about the new initiative toward more sustainable options, with some Twitter users even musing that a seven-year window to implement the plastics ban is way too long. Still, most agree that single-use plastics need to go, and perhaps Kroger’s push to ban the ubiquitous bags will inspire other major chains to go the same route.