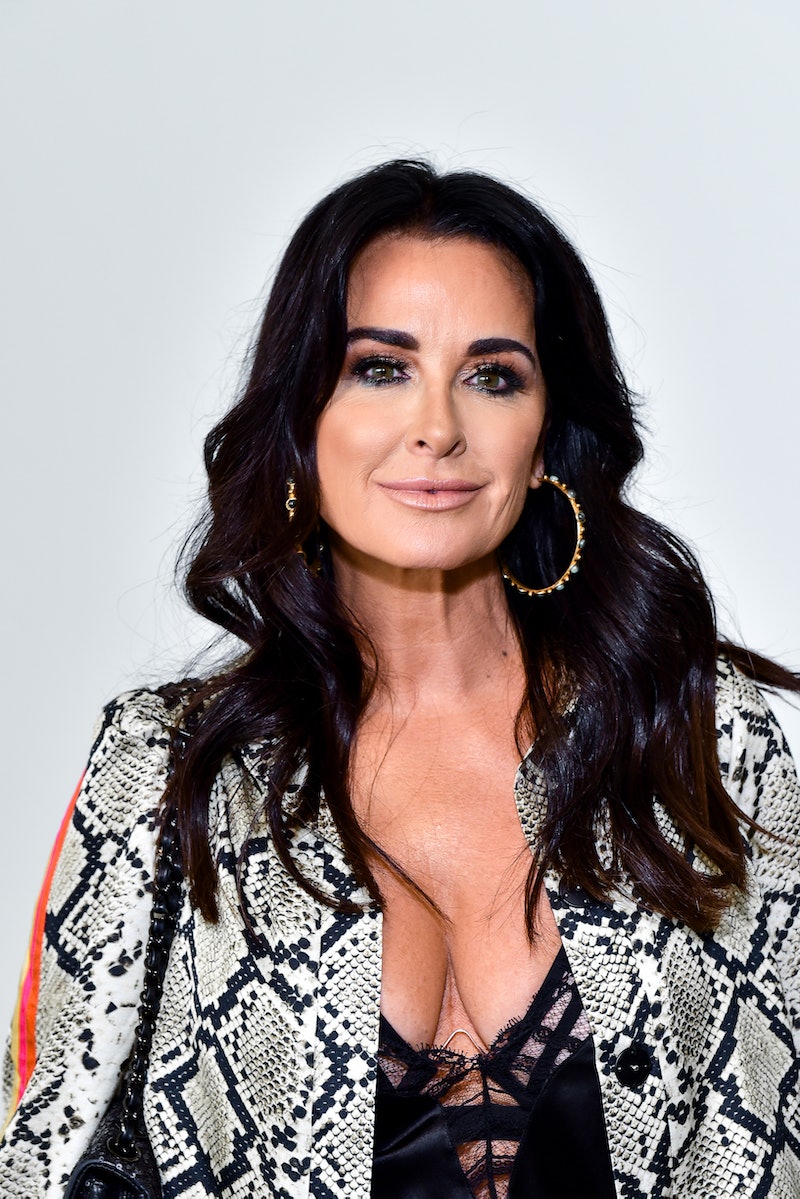 Kyle Richards has a brand new venture, and all her Real Housewives of Beverly Hills co-stars are being super supportive. Last fall, Kyle Richards launched a fashion line of resort wear with designer Shahida Clayton called Kyle + Shahida. To help out with her launch, several RHOBH stars walked in Kyle's runway show.

According to Vogue, Erika Jayne wore red pants and a printed nautical-themed shirt. Dorit Kemsley donned red leather pants with a crop top and blazer. Lisa Rinna and Teddi Mellencamp both sported swim suits and silk robes. And Denise Richards wore a silk robe with a lacy bodysuit and black pants. According to Bravo TV, frequent RHOBH star Faye Resnick also walked the runway in a red robe and sheer bodysuit, and Kyle's daughters Sophia and Alexia showed off their mom's evening wear collection. In all, it was quite the first fashion week for Kyle's new brand.

Kyle told Women's Wear Daily that she wanted to make sure that her line appealed to all of her fans — who run the gamut from teens to older women. "We want to have something for everyone," she said. Her line includes jumpsuits, rompers, skirts, dresses, robes, blouses, and jackets that would look great by the pool or at the club. They range in price from around $79 to around $569, so there's something for all kinds of fans' price points.

The reality star is no stranger to the fashion world, having previously collaborated with HSN. She also had a boutique that recently closed. That's when she decided to turn to one of her favorite designers, Shahida Clayton, to collaborate. Kyle told WWD that she had previously stocked Clayton's clothes in her store and had also worn her looks on the show, so the next logical step was to collaborate with her. "I know the fabrics and how I like to look and feel; Shahida can get it done," Kyle said.

And did she ever get it done. Now that Kyle's wearing her own line on the show, she knows it's likely to get even more press and attention. "It's a lifestyle show," she told WWD of RHOBH. "Some people watch for the fashion, the homes, the cars. They are watching everything we wear, and we have to be looking our best and comfortable ... reality TV is a great platform to showcase these things."

Catch Kyle's looks on the new season of RHOBH and on her website, where fans can shop away to dress just like her.