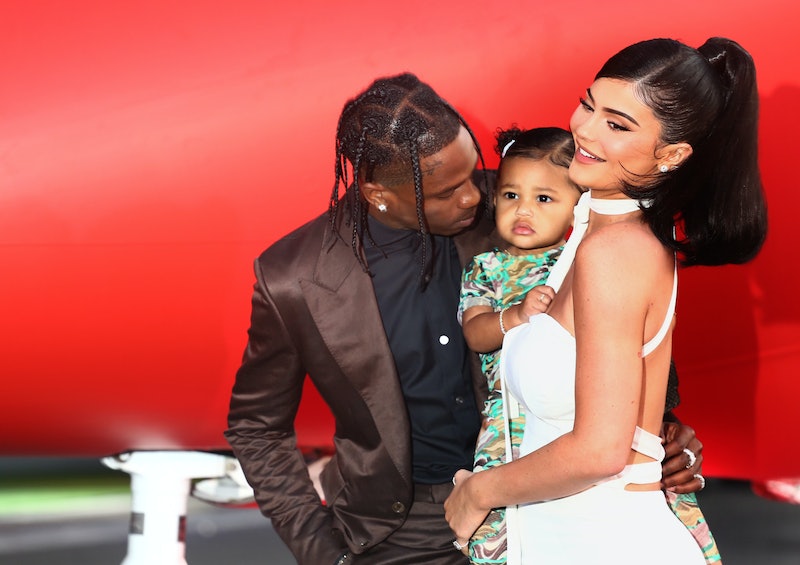 News about Kylie Jenner and Travis Scott's reported split is already setting the internet ablaze with sorrow and speculation, but despite the fact that they may no longer work as a couple, Jenner and Scott plan to split custody of their daughter Stormi, according to a new report. An insider close to the former duo told People that, in the wake of their breakup, Stormi “will spend equal time” with both of her parents since they want to make their daughter's needs their first priority, regardless of what's happening between them in the weeks, months, and even years ahead.

News of the reported breakup broke on Tuesday, Oct. 1, though they have not commented on the story publicly. Bustle reached out to representatives for both Jenner and Scott, but have yet to receive a response. “They have split for now and are living apart,” a source explained to People. “Travis moved out a couple of weeks ago and lives at his own house. Stormi will continue to live with Kylie.”

Rest assured, however, that though Jenner and Scott might be living separately right now, the rapper will still receive plenty of quality time with his child even if they're no longer living in the same place. “They are both great parents and will co-parent. They don’t want their split to affect Stormi too much,” the insider added. “As soon as they felt they couldn’t figure out their issues, they decided to separate so their disagreements won’t affect Stormi.”

As for what those disagreements were, a source told People in a separate report that Kylie and Travis couldn't get on the same page when it came to discussing their plans for the future, which led to their decision to take a break from each other after being in a relationship for two years. “There were several issues that made them decide to take a break,” the source shared with the outlet. “Kylie is all about family life and really wants a second baby.”

But as much as Kylie may be ready to settle down, the source claims that Travis wants to make his music career a higher priority than expanding their family. “She still has trust issues with Travis. He hasn’t been giving her the commitment that she needs,” the source continued. “Travis isn’t ready to give her all that she wants.”

This is a vastly different telling of their relationship from the recent joint interview Travis and Kylie did for Playboy, where Kylie stated that she thinks they work really well as a couple because they share the same priorities. "We think the same and we have the same goals and passions in life," she told Travis in the feature. "Besides the fact that we have good chemistry, we have a lot of fun together. You’re my best friend. Through all the ups and downs that every relationship has, we evolve together through them and keep getting stronger."

If their reported breakup sticks, at least there's one major priority they can still agree on, and that's Stormi. Regardless of any other differences they have, they seem adamant about putting her needs first.