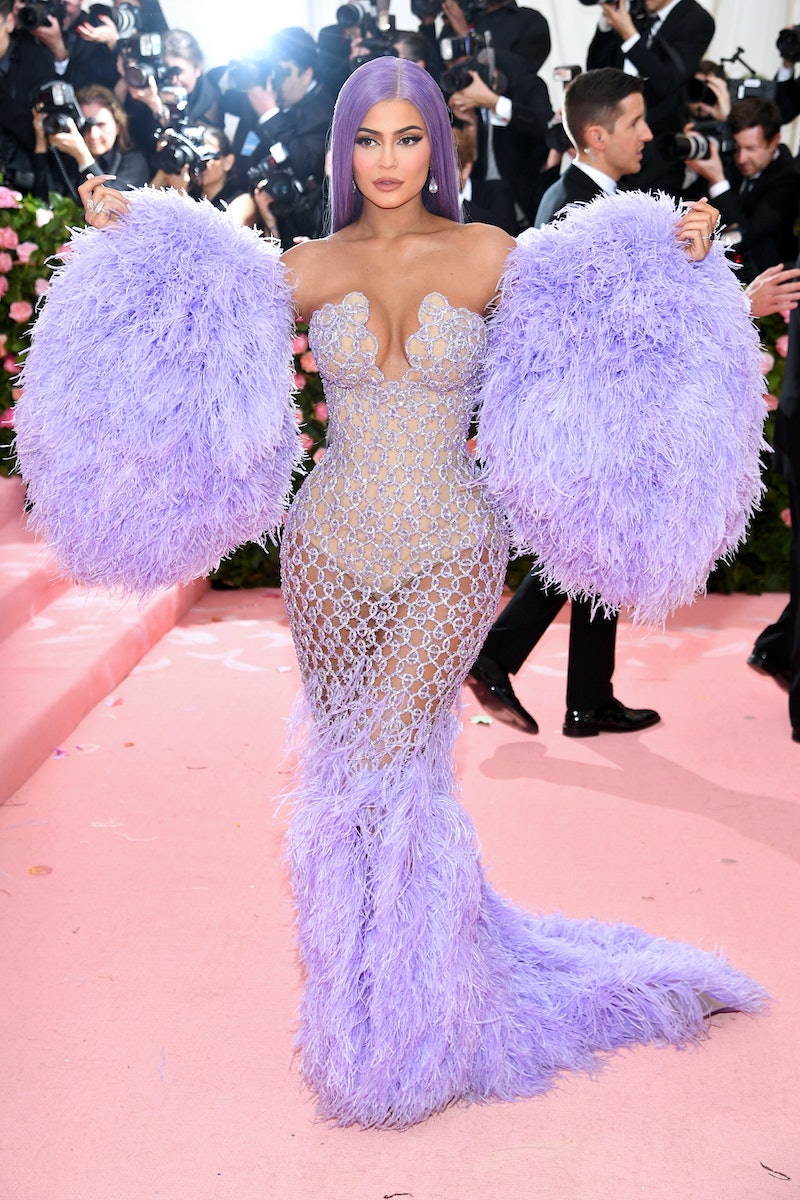 Kylie Jenner loves a surprise. While the beauty mogul never officially confirmed that she would be attending fashion's biggest night, fans of the famous sister had a feeling she wouldn't miss it (especially after making such a statement on the red carpet with her boo Travis Scott at last year's event). This year, Kylie Jenner's Versace 2019 Met Gala look is all about purple, from her head to her toe. While she usually plays it safe, this year Jenner went all out, likely to match this year's over-the-top theme of "Camp: Notes on Fashion." While it looks more like something she'd wear for Halloween versus a big red carpet event, fashion lovers and Jenner's fans alike are thrilled with her pretty purple look.

Jenner has been in New York over the last few days, showing off her extremely long hair on Instagram and while fans were expecting her to rock her all black locks, Jenner decided instead to don a purple wig that made its red carpet debut this evening. It's the perfect statement to go with her sparkly, sequined strapless gown with lavender embellishments and her giant, fabulous purple feathery boa. She kept her makeup as she always does — smooth, matte skin, voluminous lashes, bold brows, and a pinky nude lip — all achieved with Kylie Cosmetics, of course.

Jenner was accompanied by none other than her sister, Kendall Jenner, who wore a neon orange outfit, also complete with matching feathers. While the two did not attend the Met Gala together last year, the sisters decided to not only go together this year, but also wear matching ensembles. Keeping Up With The Kardashian fans couldn't be happier about it. We're sure Kris Jenner, who is also in attendance, is also really excited about their sisterly arrival, too. After all, she did tell E! that her favorite part about the Met Gala is watching her daughters arrive from the top of the stairs. So adorable!

Social media was quick to call out Kylie Jenner's purple look, noting that it looked very similar to someone else's very iconic purple wig and sequin gown moment: Lil Kim. "Basically, no one ever will be able to do the purple sequins with purple wig combo and NOT be referenced to Queen B, Lil Kim. She’s the... standard by which you will be measured," wrote Erin Floyd on Twitter.

Others noted how Kylie and Kendall reminded them of the evil step-sisters from Cinderella. Some said the duo looked like the orange and grape Fanta soda drinks. Another commented on the fact that the two kind of look like Lloyd and Harry from Dumb and Dumber. Regardless of who Kylie Jenner reminds you of, one thing you can't deny is that she looks incredible.

More like this
These Are Kylie Jenner's Best Paris Fashion Week Looks... So Far
By Dominique Norman
Bella Hadid Will Think Of Her Spray-On Dress From Paris Fashion Week “Forever”
By Brad Witter
Bella Hadid's Flare Jeans Under A Dress Outfit Is So Nostalgic
By Allie Fasanella
7 ‘Ugly’ Trends Kendall Jenner Makes Look Cool
By Allie Fasanella
Get Even More From Bustle — Sign Up For The Newsletter