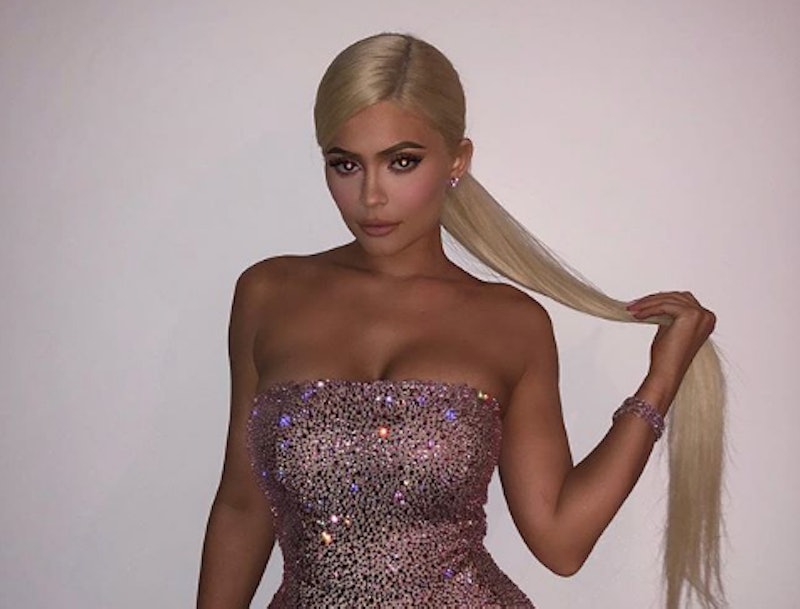 Some people spend a lifetime growing their hair out. Others just snap their fingers and magically have an extra six feet of hair. According to Refinery29, Kylie Jenner's ultra-long birthday ponytail cost $8,000. Because when you're an almost-billionaire, that's apparently what life is like.

You've likely seen Jenner's 21st birthday outfit by now. She wore a Swarovski-covered, sleeveless bodysuit and even had a Barbie doll to match. But the accessories are what made the outfit. No, not the matching Swarovski-covered handbag, but the extra six feet of hair.

Jenner opted for blonde locks for her birthday moment, but it wasn't the typical bob that you're used to. Instead, she choose a weft of hair that she wore in a ponytail. Hair extension artist Violet Teriti told Refinery29 that she used $8,000 worth of hair to make the extra long ponytail what it was.

"Kylie's weft was about 400 grams, which I typically sell for between $6000 and $8000," Teriti told Refinery29 in the interview. "It's Slavic hair sourced from Russia. There's nothing better than that hair because it's the only hair that doesn't need to be bleached and processed so many times, or even toned and glossed — it's naturally already highlighted."

There's no denying that it was quite the beauty moment. Jenner is known for making a statement with her different hair styles. She often goes from blonde to brown and back to blonde virtually overnight. Apparently, Jenner didn't give the hair stylist too much notice about wanting to go blonde for her birthday, either.

"It was really late notice — only a day! Usually it takes about a week to 10 days to receive specific bundles and two days to customize them, but luckily I had enough hair for her so I could rush it. A lot of people think it was a ponytail, but it was actually a weft, which is good when people are going really, really long because you have to have a lot of hair to have it look thick and long," Teriti told the publication.

Although Teriti went out of her way to scrape together enough hair Jenner's big day, it didn't stick around for long. The now 21-year-old went back to her short hair the very next day. Because when you're an almost billionaire, you can do whatever the heck you want.

It's no secret that Jenner loves her different hair styles. In 2017, she switched hair colors pretty much daily. One day she had bright yellow hair and then next she would have bubble-gum pink. You never knew what color she would have in her hair next.

Nowadays, she sticks to blonde. At least since she's been back on social media after her secret pregnancy. You know, when she's not rocking her natural, dark hair color.

Honestly, you never know what Jenner will wear next. Thanks to her virtually endless bank account, there are tons of different opportunities for Jenner to stun her fans. May her $8,000 hair accessories keep blessing fans forever.