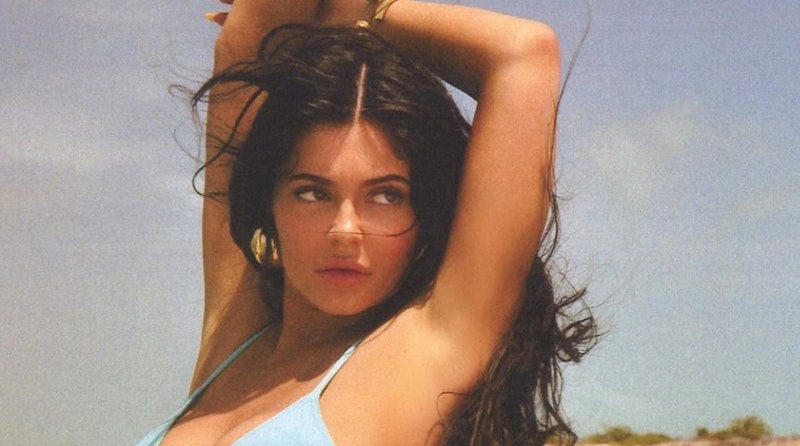 Kylie Jenner has a thing for vintage swimwear. While on vacation on July 15, the 21-year-old Kylie Cosmetics makeup mogul posted shots of herself while absolutely slaying a baby blue bathing suit. It turns out that Kylie Jenner's Chanel bikini is actually older than she is. As The New York Post reports, supermodel and fashion icon Naomi Campbell first wore this very same swimsuit on the runway in 1994 — three whole years before Jenner was born.

Jenner, who made her grand entrance into the world on Aug. 9, 1997, was soaking up the sun in Turks and Caicos while wearing the pricey and pretty blue bikini. She posted several low-key glamsual shots while posing on the bow of a boat because she was living her best and most fashionable life. The bikini top boasted triangle cups and a front tie, while the string bottom featured side ties and the instantly recognizable Chanel logo on the crotch. The soft pastel shade popped against her bronzed skin.

Jenner paired her two-piece suit with a gold Chanel belly chain and piles of chunky bangles and gilded bracelets on each wrist. She added a major dose of flair to a look that was already straight fire with those statement accessories. Her body jewelry and overall presentation were on trend.

The Chanel bikini is a classic that will never go out of style. It has a $1,690 price tag on resale sites, according to The New York Post. The chain belt is an additional $638 at resale. So Jenner's beachside ensemble costs a pretty penny — several of them, actually.

Jenner finished off her look with minimal makeup and a mega mane of black waves that tumbled down her back. Her strands were either the work of a wig or an assist from extensions. Ultimately, Jenner was every inch the mermaid while lounging by the ocean.

Jenner's vacation look was specifically from Chanel's 1994 ready-to-wear collection. Campbell strutted her stuff on the runway in the suit, all the while rocking multi-colored hair. Her version had black interlocked Chanel Cs. Campbell wore it first, and when she did, she owned it from top to bottom.

Jenner also showed off a bright yellow pedicure and an anklet, reminding us that beachwear can indeed be high fashion and act like an OOTD when accessorized properly.

As mentioned, this isn't the first time that Jenner has rocked some seriously old-school swimwear. She demonstrated her affinity for beach attire that was designed before she was alive back in 2015. While celebrating her 18 birthday, the reality star raided momager Kris Jenner's closet and wore a hot pink Body Glove swimsuit. It was a case of fashion recycling at its finest. The neon, tank-style bathing suit was cut high on the hip and boasted the brand's logo in bright orange. Kris also shared a side-by-side shot her and her daughter wearing the Body Glove one-piece on Instagram. She noted in the caption that she originally wore the suit in 1989 while in Acapulco — approximately eight years before her youngest child was born. Body Glove was a highly visible surf brand in the '80s and '90s and Jenner brought it back to prominence — if only for a few paparazzi shots.

Jenner knows how to take a bathing suit from another era and give a new fashion lease on life. She is also proof that '90s fashions aren't going anywhere.