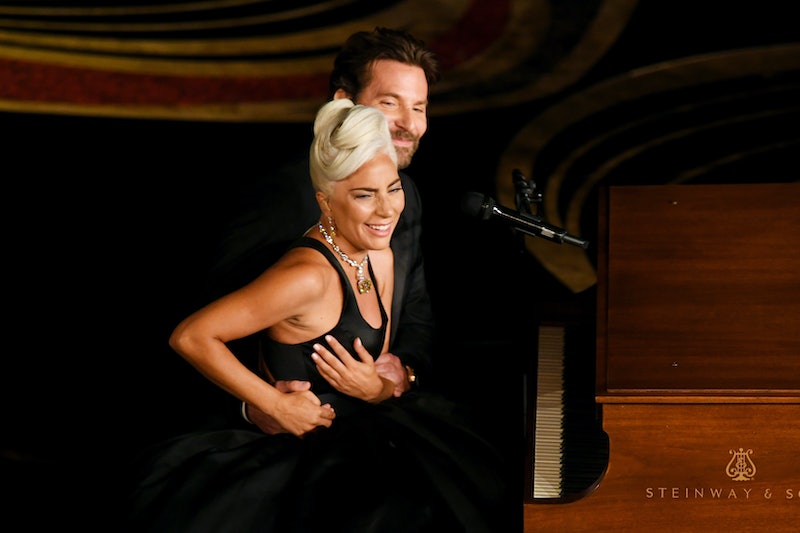 Among all remakes, A Star Is Born is one that has become an unabashed favorite for moviegoers. The film features great music and strong acting chops. Now, A Star Is Born also brings Lady Gaga and Bradley Cooper's Oscar performance outfits to the main stage for the biggest night in film. Both their looks for the performance were stunningly gorgeous to say the least.

While the film itself is nominated for Best Picture, Gaga and Cooper performed “Shallow” from the film’s soundtrack in honor of the film's additional nomination for Best Original Song. The song's proven its popular among listeners since the power ballad has already earned over 360 million streams on Spotify. Not to mention, the catchy tune has already been praised this awards season since Gaga and Cooper previously won for Best Pop Duo/Group at the 2019 Grammy Awards for "Shallow." A killer performance requires a rock star-approved outfit, and Gaga and Cooper delivered.

Lady Gaga is known for rocking the highest forms of glam both on the red carpet and on stage, and this occasion is no different. Although she may have started her career in oversized hair bows, the singer wore a large black halter gown as she played the notes on the piano while crooning to the audience. Her Little Monsters would be proud.

During the performance, Gaga kept her look very simple and relatively close to her red carpet look. The singer wore her hair up for the performance in the same swirly updo hair style, looking like an old Hollywood starlet. Viewers also can't help but notice the five million dollar Tiffany necklace once worn by Audrey Hepburn along with a matching pair of earrings.

As if you needed another reason to praise Cooper's talents, the actor came dressed as his usual dapper self. The actor-turned-singer was decked out wearing a black and white tuxedo and a matching black. bowtie while singing the notes of “Shallow”. Despite the fact that the look is simple, it's very Bradley and still encompasses the essence of a rock star like his character in A Star Is Born.

The Oscars performance of "Shallow" wasn't the first time Cooper has sang the song live with Gaga. Cooper explained on The Late Show With Stephen Colbert that he felt out of place watching himself do an impromptu performance at one of the singer's shows at her Vegas residency.

"So we sang it and I watched the video back," he said. "I just look like this idiot from Philadelphia singing with Lady Gag."

Cooper shouldn't feel too bad, though, since most would faint at the chance to sing with Gaga. Viewers, however, were excited to see Cooper perform the song live since it's the first time he's sang it for a televised event.

Fans loved the chemistry the two shared on stage with each other.

Other fans felt like an intruder watching the entire performance, and, honestly, same.

Whether the two come out on top with awards for Best Original Song or not, the song itself is sure to be a bop you'll be belting out on karaoke night.