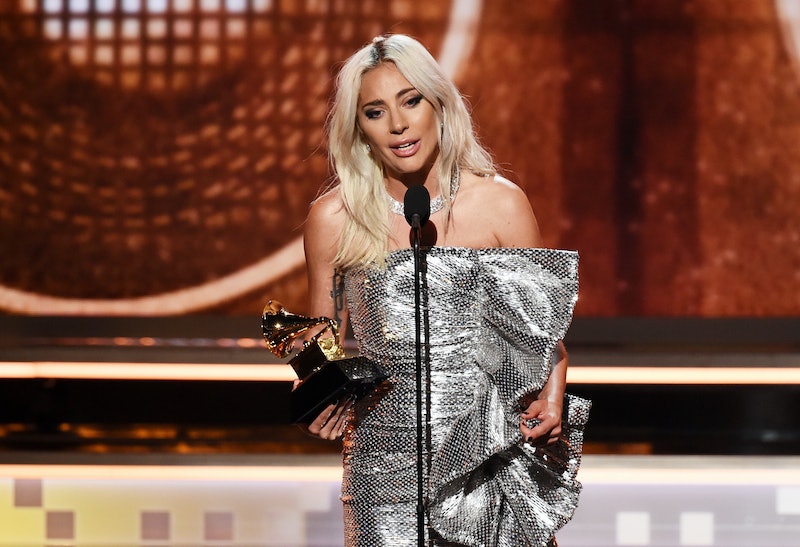 After winning the award for Best Pop Duo/Group Performance at this year's awards, Lady Gaga used her Grammys acceptance speech to call attention to the importance of mental health and being there for peers who might be suffering from mental illness.

When Gaga took the stage to accept her award, naturally one of the first people she thanked was her A Star Is Born co-star and "Shallow" collaborator, Bradley Cooper. After that, though, she shifted the focus of her speech to the more general creative community. Addressing the crowd watching her, Gaga said,

"If I don't get another chance to say this, I just want to say I'm so proud to be a part of a movie that address mental health issues. They're so important. And a lot of artists ... a lot of artists deal with that. And we gotta take care of each other. So, if you see somebody that's hurting, don't look away. And if you're hurting, even though it might be hard, try to find that bravery within yourself to dive deep and go tell somebody ... and take them up in your head with you."

Gaga has long-been outspoken about the importance of speaking up about mental health. Take, for example, her op-ed for The Guardian in October 2018, which she co-wrote with World Health Organization director-general Dr. Tedros Adhanom Ghebreyesus. "At present, every nation in the world is 'developing country' when it comes to mental health," the duo wrote. The piece continued,

"Yet despite the universality of the issue, we struggle to talk about it openly or to offer adequate care or resources. Within families and communities, we often remain silenced by a shame that tells us that those with mental illness are somehow less worthy or at fault for their own suffering."

Shortly thereafter, Gaga took yet another opportunity to call attention to the issue — this time, in terms of how it affects artists, in particular — while accepting a patron award at the SAG-AFTRA Foundation’s third annual Patron of the Artists Awards in November.

"I began to notice that I would stare off into space and black out for seconds or minutes," Gaga said of her own struggles with mental illness, as per Variety. "I would see flashes of things I was tormented by, experiences that were filed away in my brain with 'I’ll deal with you later' for many years because my brain was protecting me, as science teaches us. These were also symptoms of disassociation and PTSD and I did not have a team that included mental health support."

The fact that Gaga chose to also use her 2019 Grammys acceptance speech to highlight the importance of mental health awareness is truly inspiring. She has so many people who look up to her and who might be afraid to talk about what they're experiencing, so it means so much that she took the time to spread her message. Mental health awareness is so crucial, and Gaga's Grammys speech emphasized this point in a truly moving way.