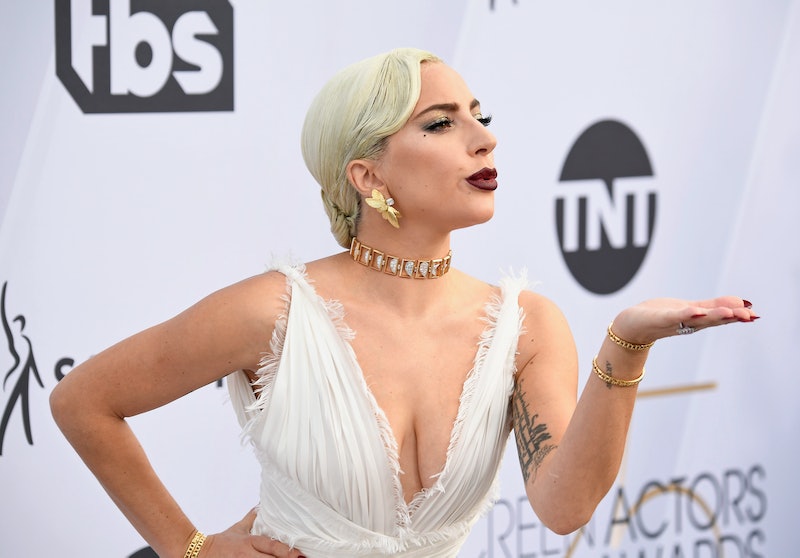 Lady Gaga is always one to watch on any red carpet. But 2019 is a bit different since she has been a regular on the awards season circuit thanks to her stellar work in and nominations for A Star Is Born. Lady Gaga's 2019 SAG Awards dress was a white hot, Dior Couture dream that was hot off the runway. It also had a statement, thigh-high slit that bared all of her leg. The slit was a critical component of the sexy dress. Gaga wore simple white heels and added pizzazz via her accessories, hair, and makeup.

The dress looked a bit deconstructed. It was a mix of vintage, '20s glam with a typically Gaga edge. Stefani Joanne Angelina Germanotta was yet again a head-turner.She rocked deep, oxblood red lips and super sharp nails, along with seriously curled lashes. Meanwhile, her hair was deeply parted to the side and fashioned into a bun. It mimicked a pixie with light finger waves. Mama Monster added a gold choker, earrings, and bracelets — all by Tiffany.

I admit that I wasn't sure which sartorial direction Mother Monster would go in at this particular awards show. The Golden Globes and the Oscars are usually the most visible (and most fabulously couture) of the major awards shows. Fans tune for the prize-giving but also to see what their fave stars will be wearing.

Gaga went all out at the 2019 Golden Globes with her custom Valentino dress. It nodded to Judy Garland's purple dress in the 1954 version of the film. It was a fluffy and dreamy blue cloud and Gaga dyed her hair to match the frock. It was a gorgeous and utterly Gaga presentation. At the 2019 Critics' Choice Awards, Gaga dialed things down a bit. She went the Old Hollywood glam route, rocking a peach-dipped Calvin Klein strapless gown with platinum waves. It was unexpected in that it low key by Gaga standards, yet still entirely glam. The fact that she has been changing things up is thrilling.

She turned things back up a bit at the SAGs. It could have gone either way, though. But something tells me she is going to save ALL of the drama for the upcoming Academy Awards.

Her glorious choker was constructed of 16 carats of sustainably sourced and brilliant diamonds.

She is a Best Actress nominee so you know she is going to bring it at the Oscars. That said, her SAGs dress was the same hue as her Critics' Choice dress. However, it was MUCH less Marilyn Monroe and MUCH more Lady Gaga. The singer and actor is truly making the most of her awards season run when it comes to her fashion choices. She has kept us guessing and remains breathtaking.

Gaga also debuted the 2019 Tiffany Blue Book Collection with her outfit. The yellow gold and diamond necklace and earrings celebrate Tiffany’s 180 years of innovation and craftsmanship, according to press materials received by Bustle.

The Golden Globes dress, hair, makeup, and jewelry were a sight to behold and totally unforgettable — just like her performance as Ally in the film.

The Critics' Choice gown had a peach cast. It was a classic and chic look — which Gaga isn't always known for. She usually likes to be flashy and splashy when strutting her stuff on red carpets. This is, after all, the woman who wore a meat dress many years ago. That said, she was sending a message with that frock. Nowadays, her style is evolving and she isn't wearing outrageous ensembles for the sake of sartorial shock at Hollywood awards shows. She is still very "Lady Gaga-esque" with her choices, though.

Stunnning at the SAGs, indeed.