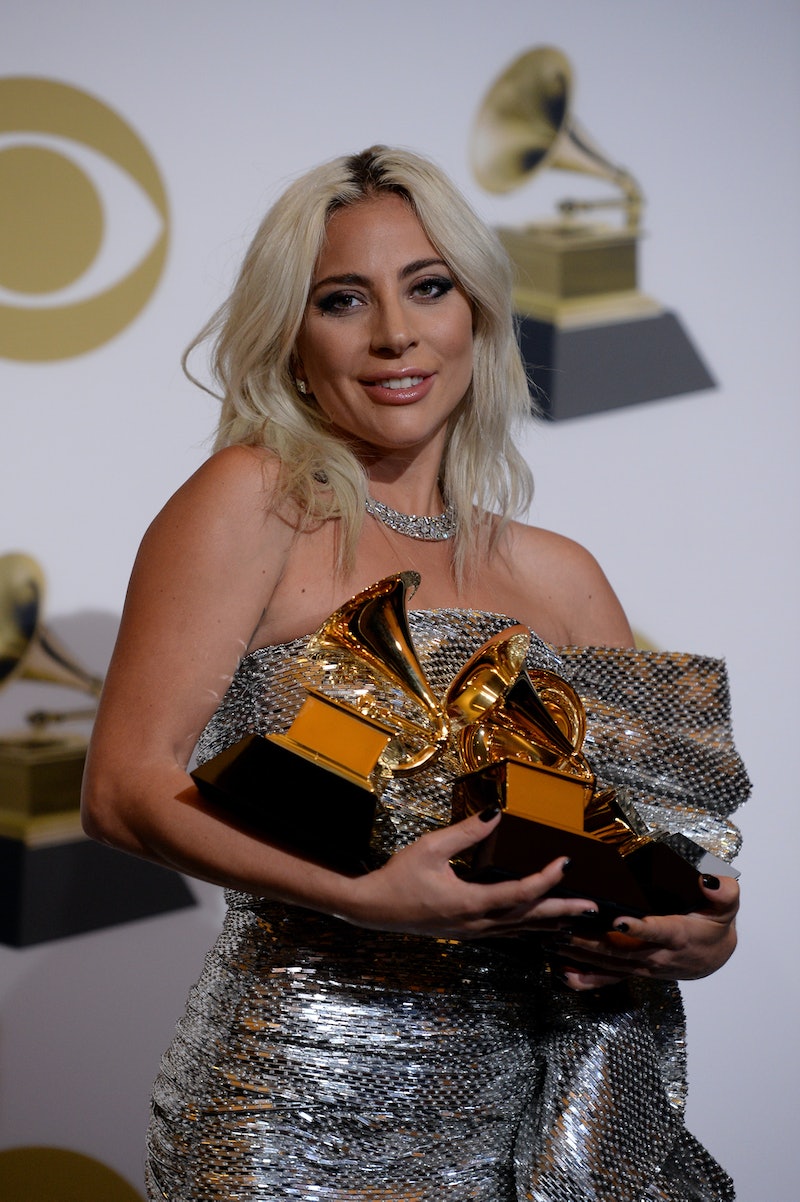 Lady Gaga will now have a piece of Ally with her wherever she goes. The singer and actor got a very special tattoo in honor of her iconic role, and it's pretty hard to miss. Lady Gaga's A Star Is Born tattoo takes up her entire spine — but that's only fitting, considering all the awards she's been winning for the acclaimed movie.

Gaga's tattoo pays homage to the song Ally sings in the beginning of the movie, "La Vie en Rose" by Edith Piaf. Jackson sees her performing the song at a bar, and their rollercoaster relationship starts from there. The tattoo itself is a rose that extends from the back of her neck all the way down her back, along with the song's title.

And as E! News points out, "La Vie en Rose" in particular has a special significance for Gaga and the movie. Apparently, Bradley Cooper saw Gaga performing the song in 2016, which helped inspire him to cast her alongside himself in A Star Is Born. (It turns out, Gaga's sung "La Vie en Rose" a number of times over the years, although the movie's version of it is sure to be her most well-known performance of it.)

The song's lyrics about seeing life through rose-colored glasses could describe Ally and Jackson's relationship in the movie, too. Ally is skeptical about Jackson at first. But her worries do seem to fade away during scenes like his impromptu proposal and their spur-of-the moment wedding, which is basically the definition of living with rose-colored glasses on. The lyrics also talk about swearing love for life, which Jackson did for Ally in the movie.

Gaga's massive back tattoo isn't the only new ink she's been sporting lately, either. The singer also got a tattoo of four music notes that spell out "G-A-G-A" on her forearm.

The two new tattoos join plenty of other ink for Gaga, too. She has a tattoo in honor of her dad, one of David Bowie's face, and a unicorn tattoo, just to name a few. But the "La Vie en Rose" one might be the biggest one yet. And that makes sense, considering her acting and singing in the Oscar-nominated film marks her biggest role to date.

A Star Is Born has eight Oscar nominations, including Best Picture and Best Actor/Actress nods for both Cooper and Gaga. Gaga also won two Grammy Awards for "Shallow," for Best Pop Duo/Group Performance and Best Song Written for Visual Media.

The film has received plenty of praise, so it makes sense that Gaga would want to commemorate it with a substantial tattoo. Of course, she was already a huge pop star before the movie. But thanks to all of the awards and nominations, Gaga will probably always be associated with Ally from now on. And with her new tattoo, the character is forever a piece of her, literally.