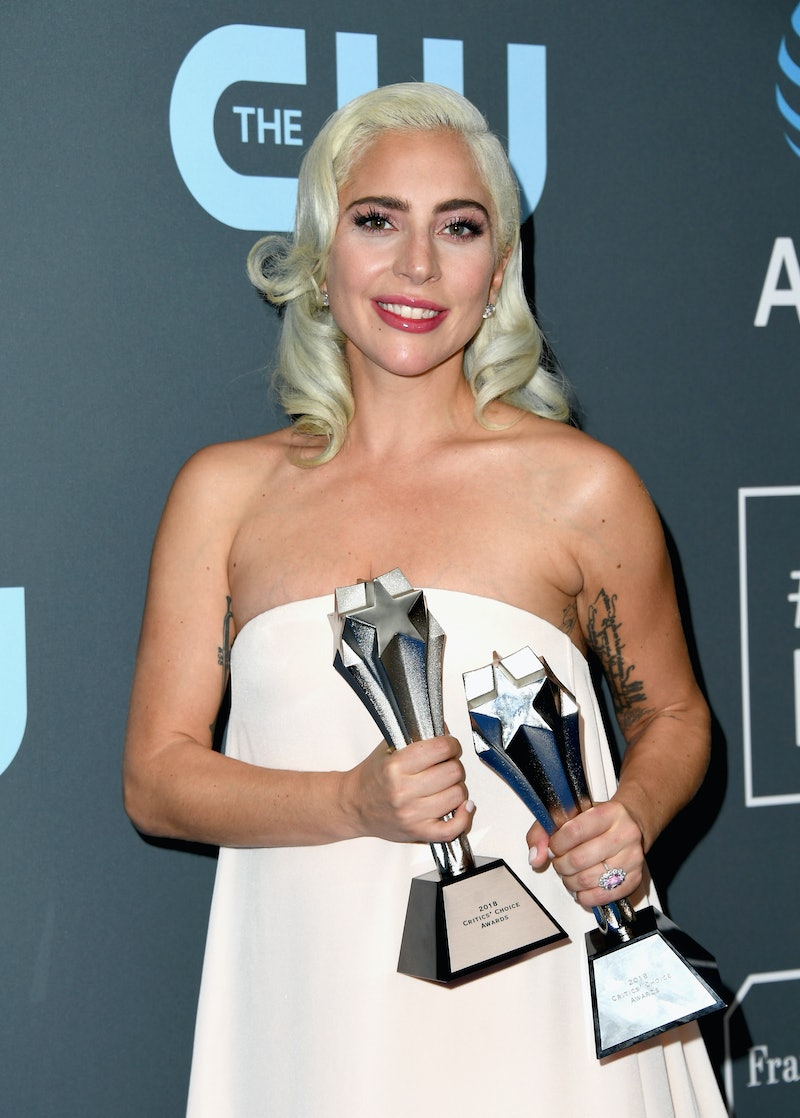 Long before she made her movie debut in a film that skyrocketed her already viral fandom, Lady Gaga sent a message about art. Her work, for her, has always had a deeper meaning — whether it was in her 2011 anthem, "Born This Way," that preached individuality and self-love, or in her donning of a meat dress at the 2010 MTV VMAs, which she wore in solidarity with gay members of the military. On Jan. 19, in the midst of awards season, Lady Gaga performed "Shallow" at her Las Vegas show, Enigma, and took the opportunity to remind her fans of that career-defining, self-defining pillar.

Ever since A Star Is Born hit theaters, a constant Gaga buzz has surrounded awards season. And now that buzz is only getting louder. She already won a Golden Globe for Best Original Song, "Shallow," and was awarded with Best Actress and Best Song (also "Shallow") at the 2019 Critic's Choice Awards. (Best Actress was a tie with The Wife's Glenn Close.)

She also received multiple SAG Award and Grammy nominations, and Oscar noms are anticipated. So it shouldn't come as a surprise that the film's iconic, original duet is highly requested at her Vegas residency.

She proceeded to play the song's intro on the piano and sing a bit of the first verse before saying, "I want you to leave here loving yourself, not me." And everyone cheered. That sentiment from Gaga is the same magnanimous, supportive one that original fans of hers have latched onto since the beginning.

It's the same sentiment that f"ueled her "to speak out for suicide awareness after Anthony Bourdain and Kate Spade took their own lives, and that compelled her to share her journey with chronic pain and publicly praise Dr. Christine Blasey Ford after she risked her life to stand up for what she believes in.

In her Actors on Actors interview with Lin-Manuel Miranda and Variety, Gaga talked about writing "Shallow," and about how striking it was for her to see fans' adoration of the song.

"It's been kind of shocking and amazing to watch people latch onto that song so much because it’s, I feel for me as an artist, one of the most authentic things I've written," she said. “This is a conversation between a man and a woman, and he actually listens to her. And I think we live in a time when this is something that's really important to women. Women want to be heard."

And that's why Gaga is so loved. Fans, high-profile publications, and Vegas residencies can do their best to glorify her as a person, but she never lets them forget about the deeper meaning to her work.