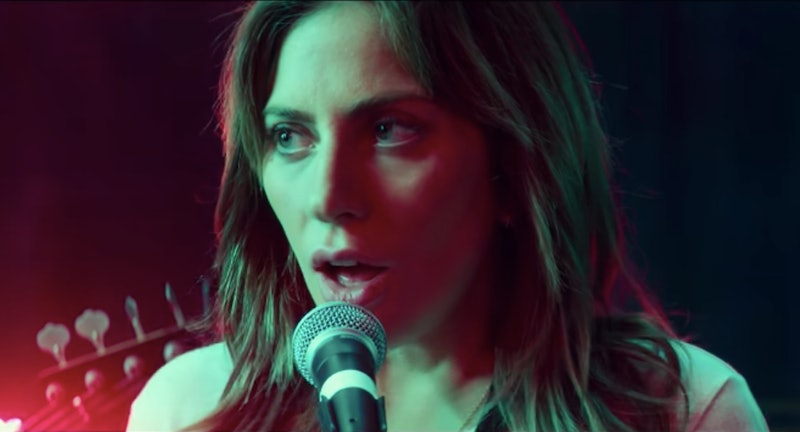 It's the moment when the star is officially born. The new video for Lady Gaga and Bradley Cooper's song "Shallow" from A Star Is Born shows Ally (Gaga) going from club singer to a stadium act in just over three and a half minutes. But the clip of Lady Gaga's song from A Star Is Born — the one fans everywhere have been humming to themselves for months — also shows Gaga stripped down to her Stefani Germanotta core. It shows that she's a star with or without her meat dresses. Something her Little Monsters have always known, but now the world will get to see.

The video, which features footage from the film, in theaters Oct. 5, starts with Ally, an up-and-coming singer/songwriter working up the courage to join country star Jackson (Cooper) onstage for the biggest show of her life. In just a T-shirt and jeans, she struts out there and begins to sing her duet, a slow-burning ballad where she sings about despair, pain, addiction and how they can burst out of it together. (Gaga herself wrote “Shallow” with Mark Ronson, Andrew Wyatt, and Anthony Rossomando.) Ally starts off facing away from the crowd, toward Jackson, even covering her face as she sings to try and calm herself down in this moment.

"I’m off the deep end/ Watch as I dive in / I’ll never meet the ground," she sings on the chorus building up her courage. Her voice getting stronger and louder, more Gaga-ish, but yet she still can't keep her eyes open to see the crowd's reaction. "Crash through the surface / Where they can’t hurt us," she sings. "We’re far from the shallow now."

When featured in A Star Is Born trailer, the snippet of "Shallow" quickly gave the internet a Gaga meme that pokes fun at her wail of "haaa ah ah ah," which, for those who care, comes in at the 2:35 mark. But, this video and song, which Gaga has said is an extension of her last album, Joanne, shows just how intimate this film is.

The video really lays out how the film is about a woman coming into her own. And how it's a bittersweet love story about two people with their own demons, as seen in the shots of Ally and Jackson getting close, but also falling apart. And, finally, how it's a stripped down look at fame and the toll it can take on a person and those they love.

It's also a story Gaga knows well. Gaga recently revealed her own insecurities inspired her A Star Is Born character, as reported by The Mirror. She added that it was her director and co-star Cooper who helped her delve into this part of herself. “I went to depths in my heart and in my mind that I have never done before," Gaga said, according to The Mirror, "because I had someone so wonderful by my side that I could give that vulnerability."

That connection she felt with Cooper also found its way into the movie, specifically the script, which took inspiration from her own life. "I spoke a lot to Bradley about my life and they integrated part of my life into the movie but in a very special way," Gaga said without going into detail. "I am forever grateful to him for that."

A Star Is Born offers the world a different Lady Gaga, one that isn't afraid to show her true self on the big screen. And with "Shallow" fans can finally get a taste of what this new kind of Gaga has in store for them in the film.

More like this
Everything You Need To Know About ‘Black Panther: Wakanda Forever’
By Bustle Editors
Christian Bale Sang With Taylor Swift & His Daughter Can't Believe It
By Radhika Menon
Snoop Dogg & Michelle Pfeiffer Lead Moving Tributes To Coolio
By El Hunt
Harry Styles’ Red Carpet Looks Have One Thing In Common
By El Hunt
Get Even More From Bustle — Sign Up For The Newsletter