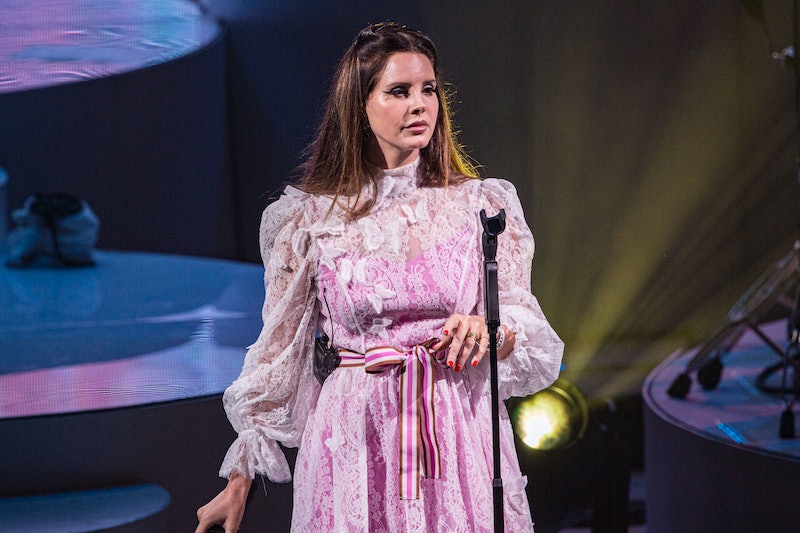 Lana Del Rey's critique of the music industry just landed the singer in a whole bunch of controversy. In an Instagram post shared on Thursday, May 21, Lana Del Rey denied her song lyrics "set women back" and defended herself against critics who maintain that her music "glamorizes" abusive relationships. However, at the start of her post, the singer wrote that several of her peers in the music industry — including Beyoncé, Cardi B, Kehlani and Nicki Minaj — have had success writing songs "about being sexy, wearing no clothes, f*cking, cheating, etc." whereas her music, about "being in love" is critiqued harshly by the media. And this did not sit well with many on Twitter.

"Can I please go back to singing about being embodied, feeling beautiful by being in love even if the relationship is not perfect, or dancing for money — or whatever I want — without being crucified or [people] saying that I'm glamorizing abuse??????" Del Rey wrote. Later in her post, the singer wrote that she wants to find a "place in feminism for women who look and act like me," and that she has been "slated mercilessly" for her song lyrics over the years.

While Del Rey intended to raise a point about the double standard of the music industry, and the way female singers are treated in comparison to their male counterparts, the Norman F*cking Rockwell singer has been criticized on social media for calling out women of color with her post. "Plenty, and i mean plenty of white women have had hundreds of hits singing about sex/drugs/whatever the hell and weren't ridiculed for it," Twitter user @loneamorphous wrote. "Yet 9/10 of the women she named to try to prove her 'point' were black women..."

Though she ignored the fact that many of the singers she named have faced intense (and often racist) attacks from the media for everything from their appearance to their music to their actions over the years, Del Rey wrote that she was "fed up with female writers and alt singers saying that I glamorize abuse" in her music. "I think it's pathetic that my minor lyrical exploration detailing my sometimes submissive or passive roles in my relationships has often made people say I've set women back hundreds of years," the singer continued.

"I have been honest and optimistic about the challenging relationships that I've had," Del Rey wrote. "News flash! That's just how it is for many women, and that was sadly my experience up until the point that those records were made." Still, despite dealing with what the singer called "a long 10 years of bullsh*t reviews" that criticized her lyrics, Del Rey feels she's helped "pave the way" for other female musicians to write about whatever they want to in their lyrics, without worrying that they will be labeled "hysterical."

This isn't the first time that Del Rey has defended herself against accusations of "glamorizing" unhealthy relationships; in 2017, she told Pitchfork that she doesn't like to "romanticize danger," but that she was just writing from experience. "I don’t like it. It’s just the only thing [I’ve known]," she said. "Having someone be aggressive in a relationship was the only relationship I knew. What I was used to was a difficult, tumultuous relationship." (Del Rey also no longer performs some of her more controversial songs, like "Cola," in her live shows anymore.)

At the end of her post, Del Rey noted that she was sharing her feelings publicly because her upcoming poetry books and her next album — which will be released on Sep. 5 — will deal with some of the same themes that she detailed on her social media account. However, it's unclear whether or not the singer will respond to the Twitter backlash in any follow up posts or through any of her upcoming projects.

More like this
Twitter Is Identifying With Sally Field & Jane Fonda’s Friendship In New Viral Video
By Jake Viswanath
Cruz Beckham Teased New Music With An Adorable Nod To Mom Victoria Beckham
By Stephanie Topacio Long
"Lavender Haze" Star Laith Ashley Breaks Down Filming With Taylor Swift
By Jake Viswanath
Twitter Is In Awe Of Taylor Swift’s “Lavender Haze” Music Video
By Jake Viswanath
Get Even More From Bustle — Sign Up For The Newsletter
From hair trends to relationship advice, our daily newsletter has everything you need to sound like a person who’s on TikTok, even if you aren’t.