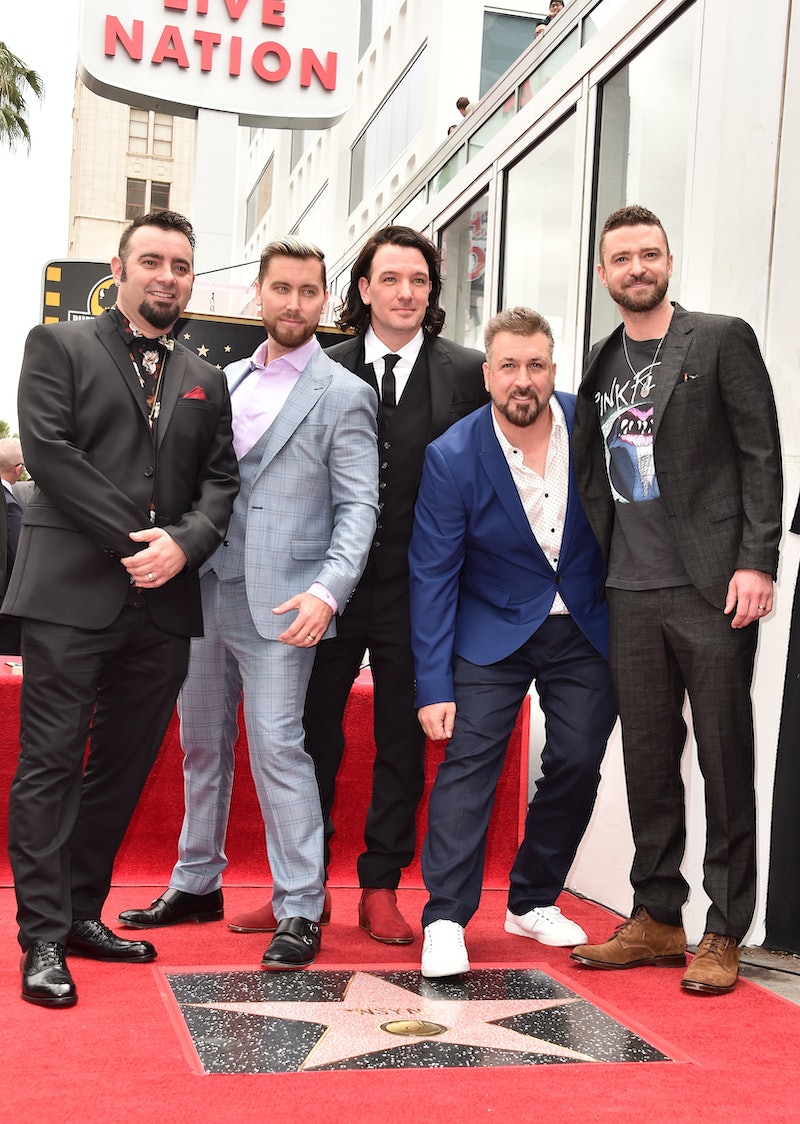 Lance Bass says his friendship with his *NSYNC bandmates has always come with no strings attached. Admitting that he was going through a dark period while grappling with his sexuality in the group's prime, when Lance Bass came out to *NSYNC's Joey Fatone, JC Chasez, Chris Kirkpatrick and Justin Timberlake, it was all love, he revealed in a new interview with Entertainment Tonight published on June 13.

“When I started with *NSYNC, I was 16 years old, so I didn’t fret over being gay because I was still young, so could hide it easily,” the singer, who publicly came out as gay on the cover of People in 2006, told ET, adding:

“It was when I was 19, 20 and everyone started having serious relationships that I really started feeling depression for the first time. All the guys had girlfriends and we’d get a couple of days off and [they would be with] girlfriends and I was the only one who didn’t have anyone. That’s when it started getting really scary because I was like, ‘I can’t keep this ruse up much longer.’”

As the iconic '90s boy band's success reached soaring heights, Bass says he began to feel lower than ever, with depression over his identity taking hold. As rumors about his sexual orientation began to swirl, the Mississippi native admits he began dating women "just for the optics of it." But that only worsened his deepening his depression.

"I thought, ‘My life sucks.’ It was like one side of my life [my career] was going great and I should be happy, but the thing that really matters — love — I couldn’t have,” he said.

Being in one of the most successful music groups of the time, he also feared that by revealing his sexuality, he'd be jeopardizing the careers of his four other bandmates: "It was a secret I was always going to take to the grave."

It wasn't until an *NSYNC hiatus that he reached what he calls "a point of no return" when he began dating men and eventually entered into his first same-sex relationship. Finding love also provided him with the clarity to begin living more authentically. "I started really understanding [myself.] ... You trick yourself into thinking you can hide it, but once I kissed a guy I was like, ‘All right. I’m 100 percent gay and this feels right.’”

Enter his life-changing 2006 People magazine cover with the words "I'm Gay" emblazoned under his photo in large yellow type. In that article, Fatone told the publication regarding Bass: “He took years to really think about how he was going to tell everyone. I back him up 100 percent.”

While Bass admits that that coming out caused him to lose some friends, he says that his *NSYNC bandmates' undying support softened the blow. “Joey knew way before anyone because that same first boyfriend was sitting in my lap in my office one day and Joey walked in,” Bass told ET. He further explained:

“Normal guys don’t just sit on other guys’ laps! I was like ‘Surprise!’ and he was like, ‘Oh please, I don’t care.’ And, the rest of the guys [took the news] fine. They were the easiest to tell. They’re my best friends … my brothers. They completely knew. So, it was not a surprise to them at all.”

Bass further reiterated his appreciation when *NSYNC got their star on the Hollywood Walk of Fame on April 30. In a moving moving speech, he expressed his gratitude to his "brothers" for their love and support. Beyond that, he said he felt a responsibility to be a role model for his LGBTQA+ fans.

"So many nights on stage, I'd see young, gay fans singing their hearts out, I wanted so badly to let you know: I was you," Bass, who married Michael Turchin in 2014, told the crowd. "I just didn't have the strength then. But I do today, and so let me say loud and proud to all my LGBT brothers and sisters who embrace me and show me the way to be who I am: thank you so much."

Now, he's using his platform to further help members of the LGBTQA+ community who may be experiencing the same struggles, by working with charities like The Trevor Project as well as the onePULSE Foundation, which provides grants to survivors and families of victims of the 2016 Pulse nightclub shooting in Orlando, Florida, that resulted in 49 deaths. Most recently, he showed his support at a June 12 remembrance ceremony, marking the 2-year anniversary of the tragedy at the gay club which he says he frequented after coming out of the closet.

While the heartbreaking struggle Bass had to endure in his formative years wasn't easy on him, it's clear to see that *NSYNC truly was — and remains — a band of brothers.