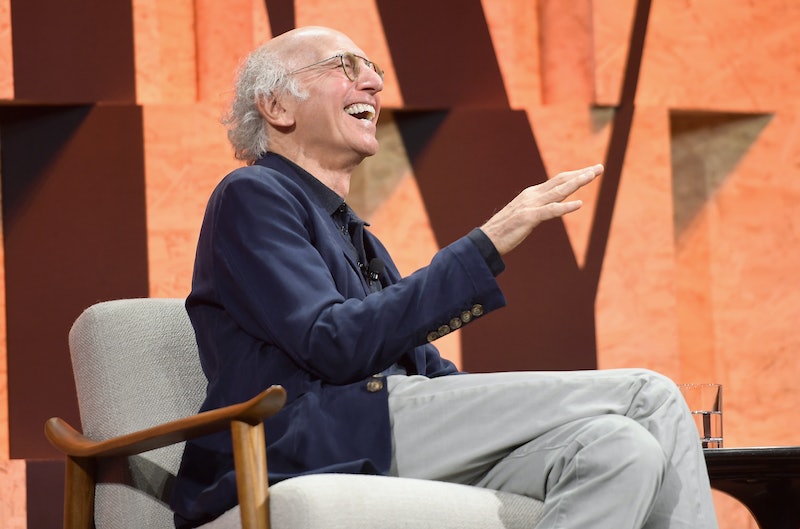 Many celebrities have doppelgangers — but you don't normally expect the doppelganger pairs to actually be related, even when the resemblance is uncanny. Well, prepare to have your world shaken, because it turns out that Larry David and Bernie Sanders really are related, and you can now watch the shining moment when they found that out.

Beginning during the earliest moments of the 2016 presidential campaign, the star of Curb Your Enthusiasm often impersonated the independent senator from Vermont. David was able to so completely pinpoint Sanders' mannerisms, voice, and way of moving that people joked that the two of them had to be long-lost cousins.

"I have to say, I didn’t have to put a lot of work into that impression," David said. "It’s not like I studied tapes or anything. He does talk exactly like my cousin, so I have that voice in my head."

Sanders seemed to totally embrace the comedian's impression of him. "People say to me, you know they talk about Larry David, and I say he does a better Bernie Sanders than I do," Sanders has said. The two of them even appeared together on Saturday Night Live, where David had often portrayed Sanders, and there was even a moment on the campaign when Anderson Cooper asked Sanders if he could try his hand at a Larry David impression. “Anderson, I know you’ve been in journalism for a long time. I am Larry David. And you didn’t get it!” Sanders said in response.

Now that the election is long past, the salience of David's Sanders impression is long gone as well — but as it turns out, the two are still forever connected. An episode of the PBS show Finding Your Roots with host Henry Louis Gates, Jr. explored the two men's ancestry and DNA. At the end of the show, Gates explained how they compare participants' DNA against the DNA of other participants, and if any stretches of DNA match perfectly, then they can say that the two people are at least distantly related. "I hope it’s a good athlete," David says in the clip, before opening the book that will show him his long-lost cousin.

"What the hell!" David then yells, as soon as he sees the photo inside the book. The clip then switches to Sanders opening a similar book and seeing David's photo. "You're kidding!" Sanders exclaims. "Oh my god, that is unbelievable! Is this true?"

"That is really funny. That is amazing," David goes on to say. "Alright, Cousin Bernie."

If you feel like you'd had this information confirmed before, then you may not actually be going crazy. Larry David actually spilled the beans in July, telling the audience of a Television Critics Association panel that Bernie was "like a third cousin or something" and that he was "very happy" to learn that. “I thought there must be some connection. I love Bernie," David said at the panel.

Even if the information isn't totally new to you, though, the video is still a delight to watch. You can see how surprised and entertained the two men really are to find out that maybe there was something genetic behind how perfect David's Sanders impression was. Sometimes, it turns out, truth is stranger than fiction. Or rather, in this case, truth is exactly as strange as fiction. Sanders, even at 76 years old, hasn't shown any signs of slowing his political career just yet — so hopefully there are still impressions from Larry David yet to come.