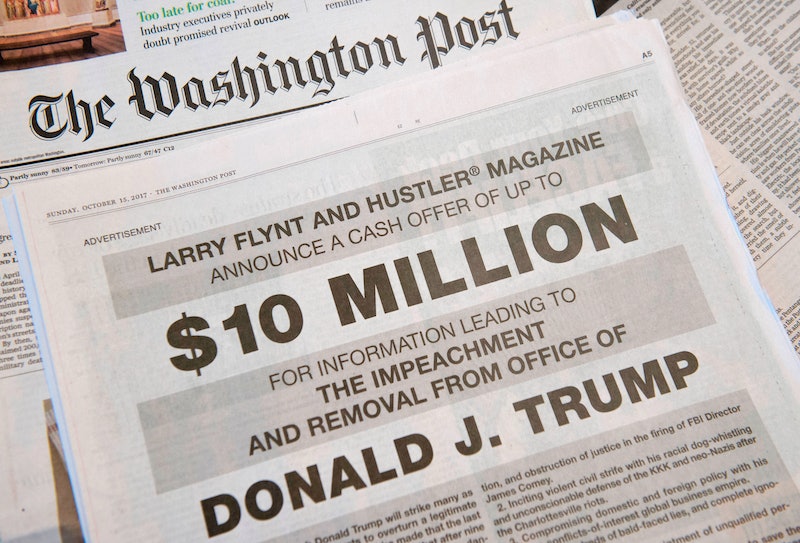 There have been many high-profile celebrities who have publicly spoken out against Donald Trump, but one business mogul is taking his disdain for the president to the next level. Hustler magazine founder Larry Flynt is offering a $10 million reward to anyone who can provide information that could lead to President Trump's impeachment. And it seems to be just the latest in his long history of ads targeting Republican politicians.

Flynt, a registered Democrat who supported Hillary Clinton in the 2016 presidential election, purchased a full-page ad in the Sunday edition of The Washington Post accusing President Trump of being guilty of six offenses that Flynt believes constitute the basis for impeachment. Those alleged offenses include "compromising domestic and foreign policy" and "sabotaging" the Paris Climate Agreement on climate change. In the ad, Flynt insists that there could be a "smoking gun" that could lead to Trump's impeachment.

To succeed, impeachment requires unimpeachable evidence. That's why I'm making this offer: buried in Trump's secret tax returns or in other records from his far flung investments there may be a smoking gun. Did he make some financial quid pro quo with the Russians? Has the business of the United States been compromised to protect the business of the Trump empire? We need to flush everything out in the open.

The ad includes the number to a toll-free hotline that will be staffed on weekdays between 8:30 AM and 6 p.m. PT. According to the Washington Post, Flynt expects to receive valuable information "within a few days."

Flynt has places similar ads in the past, dating back to 1998, when he successfully ended the career of a prominent Republican congressman by offering a cash reward to women willing to speak out about any extramarital affairs. But while the ad against Trump is nothing new for Flynt, it does take things a step further.

In 1998, Flynt offered a $1 million reward to anyone who could provide documented evidence of a GOP official having "an adulterous sexual encounter" to prove that Clinton's Monica Lewinsky scandal was not unique. Ultimately, he received compromising information about GOP congressman Bob Livingston, who was expected to soon be appointed as Speaker of the House of Representatives. Flynt's ad uncovered a handful of mistresses, and Livingston admitted to having extramarital affairs and resigned from Congress.

Flynt used the same strategy in 2007, though he reportedly had no particular target in mind. He took out a full-page ad in the Post, offering $1 million to anyone who could provide documented evidence of "a sexual encounter with a current member of the United States Congress or a high-ranking government official."

He also offered the same sum of money in 2012 to anyone who had information on Mitt Romey's tax returns, which the presidential candidate had not released at the time.

Flynt has been a vocal critic of President Trump, and last year offered $1 million to anyone who had "scandalous" tapes of Trump "engaging in illegal activity or acting in a sexually demeaning or derogatory manner," following the release of the Access Hollywood tapes in which Trump admitted to kissing and touching women without asking. Flynt even created a website, thedonaldtapes.com, for people to submit incriminating content.

But Flynt's latest ad takes this criticism a step further, suggesting that someone has information that can prove that the president has committed an impeachable offense.

"Impeachment would be a messy, contentious affair, but the alternative — three more years of destabilizing dysfunction — is worse," Flynt wrote in the ad. "I feel it is my patriotic duty, and the duty of all Americans, to dump Trump before it is too late."

Although Trump's political advertisements are nothing new for the media mogul, his latest full-page ad shows the extreme measures that some Trump opponents are willing to take to get rid of, as Flynt called him in his ad, the "most powerful moron in history."