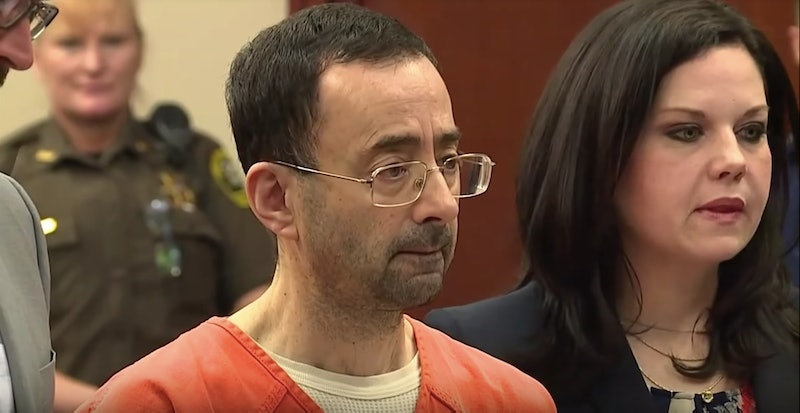 A week after her client was given an effective life sentence for sexually assaulting children, an attorney for Larry Nassar, Shannon Smith, questioned whether some of Nassar's victims were actually molested in the first place, and said that the disgraced Olympics doctor was "never inappropriate to" his patients. Nassar has been sentenced to a minimum of 100 years in prison for various crimes to which he's pled guilty, including sexually assaulting minors and possessing child pornography.

“There were girls who had perfectly normal lives that never questioned the medical treatment done by Larry Nassar — and there is a legitimate medical treatment that involves touching sensitive areas and even penetrations,” Nassar's lawyer Shannon Smith told WWJ Newsradio 950 on Thursday. “Some of those girls, to be quite frank, they didn’t even know what to think because they never felt victimized. He was never inappropriate to them. And because of everything they’ve seen, they just feel like they must have been victimized. And I think that’s really unfortunate.”

Smith added that, although there was "a lot of child pornography that could not be refuted," Nassar nonetheless "comes off as a really great person," and "did a lot of good for a lot of his patients."

Over 150 of Nassar's former patients testified in January that he sexually assaulted them in his capacity as a doctor for USA Gymnastics and the Unviersity of Michigan. Eaton County Judge Janice Cunningham, who is overseeing Nassar's sentencing in one of his trials, said on Wednesday that the total number of women who've accused him of sexually assaulting them has reached 256.

In a follow-up interview with ESPN, Smith clarified that she wasn't denying that Nassar had sexually assaulted some of his patients. But she suggested, both to WWJ and ESPN, that the true number of girls victimized by him may be much lower than the media has reported.

“I have a very hard time believing that my client could have even possibly assaulted that many people day in and day out in front of their parents, and that every single one of those things was a crime, but he was such a manipulator he got away with it. I just can’t imagine that’s true,” Smith told WWJ. “As much as they were allowed to speak at sentencing, and that was something we agreed to, even during the sentencing, more and more people were coming forward thinking ‘I was fine my whole life and now all of a sudden I have realized I was a survivor.’ I think that’s really sad.”

Over the course of two different trials — one in Eaton County and one in Ingham County — Nassar pleaded guilty to a total of 10 charges of criminal sexual conduct, four of which involved girls under the age of 13. In a separate case, he pleaded guilty to three counts of criminal possession of child pornography.

Nassar was sentenced to 60 years in the child pornography case and between 40 and 175 years in the Ingham County case. He's still awaiting sentencing for his guilty plea in the Eaton County case; at 54 years of age, Nassar is already assured to spend the rest of his life in prison. Judge Rosemarie Aquilina alluded to this in January when she sentenced Nassar in Ingham County, telling him that "I just signed your death warrant."

Smith said that she's received death threats for defending Nassar, but defended her decision to do so on Constitutional grounds.

“My job is absolutely not to question my clients’ behaviors or things that have happened," Smith told WWJ. "My job is to make sure the process is fair and to make sure they’re getting a defense. Everyone is entitled to a defense under the Constitution."

In a statement released by a different attorney, Nassar distanced himself from Smith's remarks, saying that he is "sorry about this distraction at a time when the attention should be on the statements of these victims."