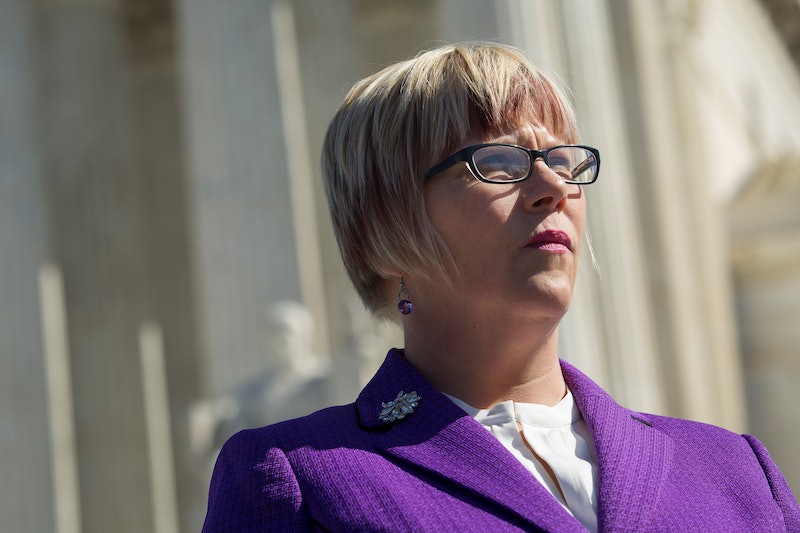 On June 27, 2016, the Supreme Court struck down Texas's abortion laws requiring providers to have admitting privileges at a nearby hospital and clinics to have the same facility standards as ambulatory surgical centers. It was a landmark ruling celebrated by reproductive rights advocates and progressive women in America. But a year later, the restrictions that were declared unconstitutional in the Lone Star State still exist in states across the country.

"Our victory last summer, in my mind, was the start of something really big, not the end," says Amy Hagstrom Miller, founder and CEO of Whole Woman's Health, the lead plaintiff in the case that brought about this decision that sunny June day.

Immediately after the Supreme Court ruled on Whole Woman's Health v. Hellerstedt, Alabama's then-Attorney General Luther Strange dropped his appeal of a lower court's decision regarding a similar law his state wanted to enact: "While I disagree with the high court's decision, there is no good faith argument that Alabama's law remains constitutional in light of the Supreme Court ruling."

A few months later, Virginia's state board of health voted to repeal the state's Targeted Regulations on Abortion Providers laws, citing the Whole Woman's Health decision in the process.

But there's frustration among reproductive rights advocates that laws similar to the ones in Texas still exist. According to the Guttmacher Institute, two states still require an abortion provider to have admitting privileges, and eight states require at least an alternative arrangement, like an agreement with another physician who has admitting privileges. Meanwhile, more than a dozen states must comply with rules specifying how and where an abortion clinic can be built — down to even the size of the rooms and the width of the hallways.

Why, if the Supreme Court declared these regulations unconstitutional, are these laws still on the books in so many states across the country?

Who Enforces A Supreme Court Decision?

"The Supreme Court doesn't have an army" to enforce its decisions, says Karen O'Connor, a professor and founder of the Women & Politics Institute at American University. It "relies on the executive branch of government or the states to implement its decisions. And if the state is controlled by Republicans and has a Republican governor, they're not going to do anything to repeal that law."

That means if laws similar to the one decided by a Supreme Court ruling are already in place, they're going to stay there until someone does something about it. The ACLU, Planned Parenthood, or NARAL Pro-Choice America could go into court in each specific state and nab an injunction immediately, but people with "standing" — like clinics affected by states trying to enforce now-unconstitutional laws — can take it to court as well.

"The easiest way to have standing is if your state has the regulations still on the books and they try to enforce them against the clinic," O'Connor says. Essentially, only clinics that have been threatened by the laws or have actually been shut down have standing.

But Hagstrom Miller points out that "standing" is a legal area where pro-choice advocates could be more creative. She says people — ideally a provider, but also a member of an abortion fund or advocacy group — could write to the attorney general of a state where a similar law still stands and say it seems to not be enforceable now.

"And you might have a favorable attorney general say I'm not going to enforce this anymore, rather than having to bring a whole big lawsuit," she says.

Anti-Abortion Organizations Have A Strategy

Americans United for Life, which describes itself as "the nation's premier pro-life legal team," has adopted a specific strategy to attempt to decrease abortions in the United States. By systematically working to implement small bits of legislation in each state, "we are laying the groundwork for protecting the unborn in the future, during the state-by-state battle that will follow Roe's ultimate reversal," according to the organization's website.

"In terms of social change, you have to think about what's the next move," AUL President Charmaine Yoest told The Atlantic last year. "You're not going to capture the queen in one fell swoop."

With this incremental approach, AUL slowly works to push legislation that puts additional regulations on abortion. In fact, some TRAP laws requiring admitting privileges — including the one Whole Woman's Health challenged — can be traced back to AUL's model legislation called "The Abortion Providers' Privileging Act."

"In the Hellerstedt decision, the Supreme Court said that while they did not think there was enough evidence presented in the case to establish the need for health and safety standards, if there was proof of need, then the health and safety standards could be constitutional," says Kristi Hamrick, a spokesperson for AUL. "What that means for the pro-life movement is that we must show the many harms of abortion and the many problems throughout the abortion industry."

The biggest issue with enforcement of a Supreme Court decision, though, is not that it's not an overarching repeal across America. It's the money.

"If I was a clinic director a year after this decision, and someone came in from the state to tell me I wasn't in compliance with state law, I would laugh in their face," O'Connor says. She says she'd call the lawyers in the community, and "we'd be into court asking for a restraining order and a temporary injunction from them enforcing the law. And almost every judge in the country would do it. And if they wouldn't do it, they'd get reversed."

But lawyers cost money. Being in court costs money. And the time spent in litigation takes away from the time a clinic has to invest in the patients. "It's just another one of the irritants that cost money and take away from being able to provide the full range of women's health services," O'Connor says.

Hagstrom Miller feels a sense of urgency in getting laws to the court, though, especially as rumors swirl that Justice Anthony Kennedy, who has often voted in favor of abortion access, might soon retire. With the court ruling in their favor, she wants attorneys in the reproductive rights field to proactively bring lawsuits instead of staying in response mode.

And The Litigation Doesn't Stop

Whole Woman's Health even became the lead plaintiff in a new lawsuit just four days after the Supreme Court delivered their victory in 2016. Immediately after the decision, Texas then introduced laws regarding fetal tissue disposal requirements, which Hagstrom Miller was able to halt with Whole Woman's Health v. Hellerstedt II. As that case goes through the appeals process, though, Texas politicians rolled the same regulations — along with an attempt to ban the dilation and evacuation procedure — into an omnibus bill called SB8. Hagstrom Miller is fighting that, too.

The original Whole Woman's Health decision can't be applied here, because the laws are quite different. Both Hagstrom Miller and O'Connor see the potential for it to be struck down as an undue burden, but it'll still have to go through the whole process. "Justice isn't static," Hagstrom Miller says. "It’s not like, 'Oh we won, we’re done.' It’s a constant pushback."

It's been difficult for Hagstrom Miller to celebrate when she reflects on the past year and all that she, her team, and the country have been through. But it's also because of that hardship she believes it's important to celebrate — and keep pushing back. Even as politicians get creative in their attempts to make abortion impossible to access, Hagstrom Miller says it's better to be angry than surprised.

"We in the pro-choice movement and the abortion care services area aren't used to winning," Hagstrom Miller says. "Hopefully we can remain emboldened."