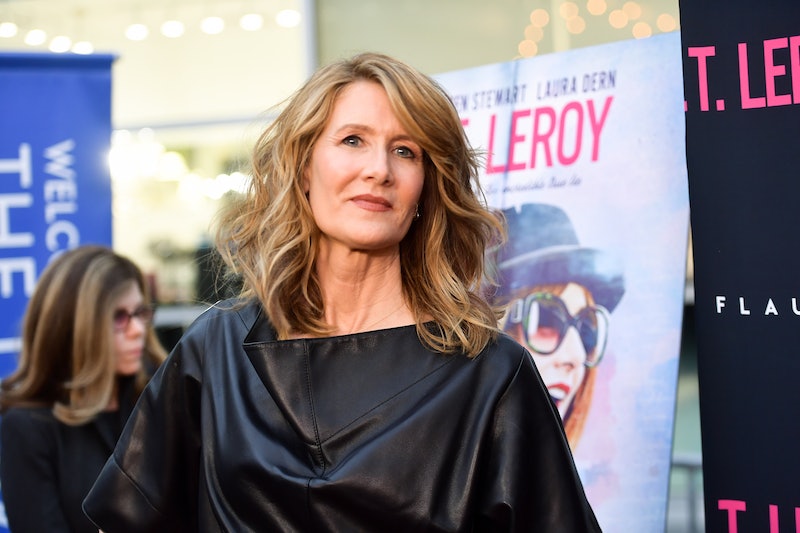 Jurassic Park (1993) will always be recognized as a '90s classic, thanks in large part to Laura Dern's incomparable heroine, Dr. Ellie Sattler. But in recent years, it's had a rebirth thanks to the Jurassic World franchise. Those films, starring Chris Pratt and Bryce Dallas Howard, have also been wildly popular, and started a whole new narrative within the Jurassic Park world, while maintaining nods to the original films. 2018's Jurassic World: Fallen Kingdom even included an appearance by Jurassic Park star Jeff Goldblum. And now it looks like Laura Dern could appear in Jurassic World 3, and it might be all thanks to Pratt.

In a new interview with Entertainment Tonight while promoting her new movie, J.T. LeRoy, Dern said that she had no information on whether or not she would be called upon to be in Jurassic World 3. "I don't know, I have no idea actually," she said when asked about whether she'll appear in the upcoming film. "I mean, I love Dr. Ellie Sattler so I could never say no to that on any level... But I really don't know, I don't even know what they're cooking up yet."

One thing working in favor of her return: Pratt. In the same interview, Dern revealed that she recently met Pratt for the first time, and that he made a very good impression on her. "I met Chris recently at a restaurant and we didn't know each other," she said. "It was really funny, we ran into each other's arms and hugged each other like we were family, because we're both in the same movie [franchise]... He just seemed fantastic and hilarious." She didn't go into detail about whether or not they discussed Dern's possible return to Jurassic Park, but the actor told ET she's definitely still open to the idea.

In Jurassic Park, Ellie was very interested in the idea of this revival of dinosaurs, although she was slightly skeptical, as one should be. And, after narrowly escaping death on multiple occasions (she appeared in Jurassic Park and Jurassic Park III), it would be interesting to see what she would think of the new Jurassic World. Specifically, what Ellie would have to say about the new, genetically enhanced dinosaurs created in the new series.

As for Pratt, he has said in the past that he'd love to work with Dern on the upcoming movie in the franchise. "Anyway she wants to come in would be amazing," Pratt told ET last June. "The fact that she'd be willing to is just another endorsement from one of the original cast members, which is music to our ears." As far as the actor is concerned, it seems that Dern's as good as hired.

Meanwhile, Goldblum also weighed in on the topic, saying he wants to see Dr. Ellie Sattler back on screen with the dino franchise. "I don't want to pass on gossip like my character," Goldblum said to ET in March of 2018. "But it would be good news to me and to everyone, [to] millions and billions of people all over the world… all over the universe and cosmos when Ellie Sattler returns."

With Goldblum, Pratt, and Dern all on board for Ellie Sattler's return, here's hoping this Jurassic World dream will become a reality.