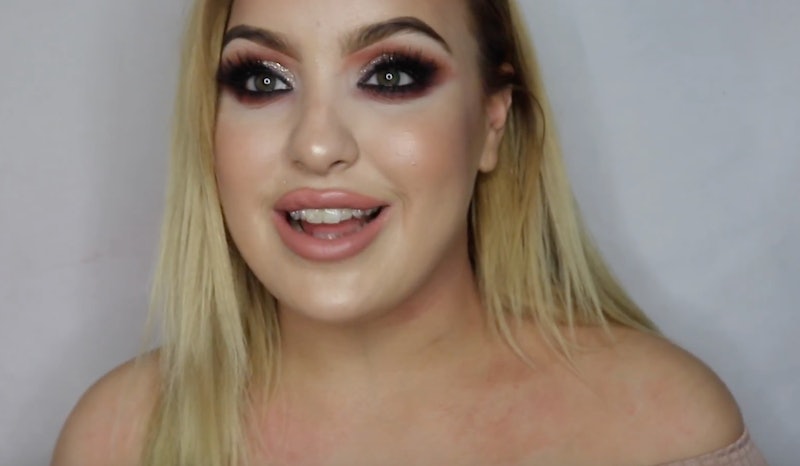 Get ready to "Awwww" over pure childhood joy. YouTuber and beauty influencer Laura Sharp recently let her adorable son take over her Instagram for an impromptu makeup tutorial, and the results are darling. Sharp posted a video of her son doing his makeup in late November, but the makeup tutorial recently started going viral on Instagram — and for good reason.

Watching Sharp's little dude, whose name is Sebastian, smile and giggle as he applies highlighter and powder all over those chubby cheeks is everything good in this world. While he may gets more electric blue lipstick on his chin than he does his mouth, it's the solid attempt that counts. And it's so much fun watching him have so much fun with beauty.

In the caption of the post, Sharp joked that her baby boy had been nagging all morning to let him film a beauty video. The influencer also noted she was a bit hesitant to post the tutorial, due to criticism that has plagued past videos of Sebastian doing his thing with makeup. But Sharp would not be deterred by trolls and haters, thankfully, and she and her son had fun playing with product.

She stated in a caption for the Instagram video, "I'm bloody proud of him for every little single thing he's achieved in the past 5 little years of his life, so why wouldn't I show him off!! He picked all of his products as well!"

We could not agree more. After all, makeup knows no inherent gender, and her son is showing an interest in joyful creativity. Why shouldn't he enjoy the colors and the products, along with the added bonus of bonding time with his mom?

The smile and the wide-eyed wonder of this video might bring a tear of joy to your eye. What you are witnessing is a child smack dab in the middle of the act of discovering and experiencing pure happiness. No one, especially internet trolls, has the right to judge that.

Sharp disabled comments for the tutorial post, and even had to warn people that they would be blocked if they bullied her son. The fact that she had to do this is sad and unsettling, showing how far we still have to go to break down gender expectations and the pressures of masculinity.

As of press time, the video has nearly 50,000 views, so the video is clearly reaching both a wide and supportive audience.

Sharp, who is a makeup artist and has her own lash brand, posted a new selfie with her son in the days after the tutorial went up, pointing out in the caption that the video of her son applying makeup isn't defined by gender. The main takeaway was a child showing an interest in creativity — and his mom's craft.

Plus, there's a more important point to be addressed in this tutorial. Sebastian has impressive taste in products. He wasn't using bargain brands for his look, instead rocking items from prestige ranges like Bobbi Brown and Anastasia Beverly Hills. Big ups to Sharp, as well, for letting her son do his thing with her pricey products.

Be sure to also check out Sebastian's technique with the big fluffy brush, which he uses on his forehead and cheeks. He uses a stellar circular motion, which he now doubt learned from watching mom.

We are watching an artist in training, folks. Or, at the very least, a kid who knows how to have fun.

Check out this tutorial from Sharp's YouTube where she expresses her love for her son, who will be starting school soon.