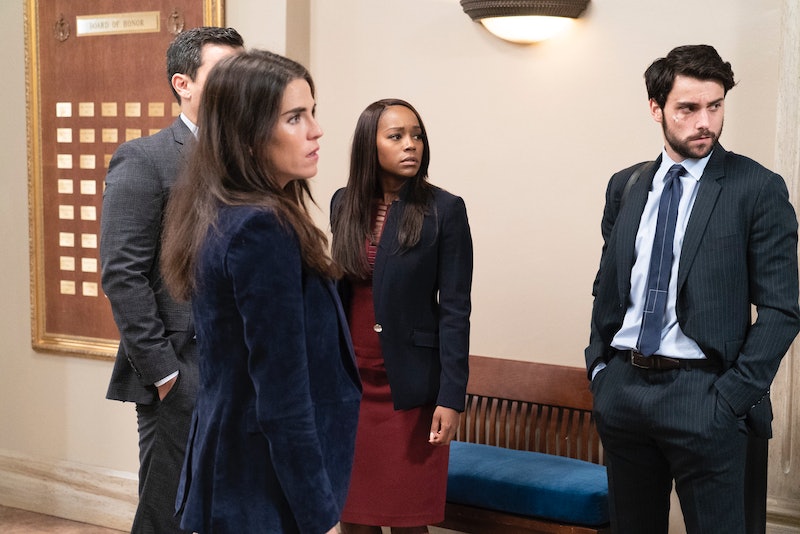 It wouldn't be an episode of How to Get Away with Murder without a major twist at the very end. This week, fans got a glimpse of a grainy picture of Laurel's brother Xavier, who may or may not be a murderer. So who is Laurel's secret brother on HTGAWM? He could play a major part in next week's season finale.

With Laurel's dad in prison, HTGAWM has kept the Castillo family drama on the back burner for the majority of this season. But after the flashback of Wes meeting with Laurel's mom before his death, the Castillos were bound to come back into the Keating Four's lives. And now, apparently, they have, in a pretty gruesome fashion.

First, Laurel gets a mysterious box delivered to the group's house. It turns out to hold her mom's hair, complete with what appear to be fresh clumps of blood. That's not even the most shocking twist, though: It looks like her brother Xavier might have been involved in Nate Sr.'s death.

A lot of people have been accused of killing him at this point, but the evidence is definitely pointing toward the Castillo family. Apparently, Xavier visited Nate Sr. at the prison from which he was being transferred, although what Xavier was talking to him about is anyone's guess.

The shocking twist comes after Emmett tells Annalise that he's not responsible for Nate's dad's death. Saying what fans were probably thinking all episode, Emmett says that retaliation at Annalise is hardly motive for him to have someone murdered. (Tegan gets Emmett's phone records, and they do point to him being involved in Nate's death. But he could just as easily be the victim of some elaborate framing, potentially at the hands of the Castillo lot.)

Thanks to some crafty blackmail, Bonnie is able to get the security footage from the visitors' room at the prison the day Nate Sr.'s killer was apparently speaking with him. When Xavier turns to face the camera, Frank recognizes him as Laurel's brother.

Fans might remember Laurel's family from HTGAWM's first season, when she went back to Florida for Christmas dinner. There were different actors playing her parents back then, and it looks like a different actor might have been playing her brother, too. (It's hard to tell from the grainy picture, but the sibling ribbing her in the "Best Christmas Ever" episode didn't have a beard.)

As for how Frank knows Laurel's brother, there might be some flashbacks in store. Frank has met Jorge and Sandrine, so he could have met Xavier along the way, too. Or Laurel could have showed him a family photo while they were dating.

Whoever Xavier is, though, it looks like he's been following his sister pretty closely. If he was involved in Nate Sr.'s death, he could be trying to get back at Annalise and all of her students, possibly for sending his dad to jail. Jorge was pretty cold-blooded, so his son might be, too.

Fans have already started offering their own theories, such as the idea that Laurel and Xavier don't have the same mom. I mean, anything's possible at this point.

Or, Xavier could have killed his own mom, based on the whole hair-delivery thing. At the very least, he could be responsible for her apparent scalping.

There are still a lot of questions fans have ahead of the HTGAWM season 5 finale, and introducing Xavier adds even more. What happened to Laurel's mom? And what about Bonnie's child? And what, exactly, is the governor guilty of? Hopefully, next week's episode will answer at least some of the burning questions fans likely have after this week's cliffhanger.