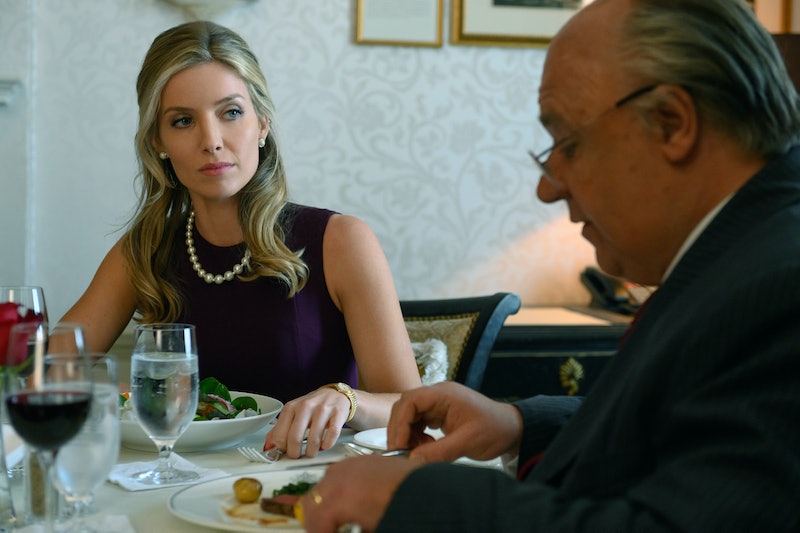 Showtime's new drama, The Loudest Voice, chronicles the alleged abusive behavior of the late Roger Ailes. The Fox News founder was accused of sexual harassment in the workplace by multiple women before he finally stepped down prior to his death, and several of the allegations take center stage in the series. Laurie Luhn's allegations against Roger Ailes, in particular, are ones that viewers will come face to face with.

In 2016, Luhn, a former Fox News booker, told New York magazine that she had been harassed by Ailes for more than 20 years. As if that wasn't disturbing enough, she alleged that Fox News executives knew about the misconduct, and allegedly helped Ailes cover it up. Gabriel Sherman, who wrote that piece for New York Magazine, also wrote the book on which The Loudest Voice is based, so the show will likely draw straight from his reporting.

Luhn told Sherman that "it was psychological torture" working for Ailes and that it had ruined her life. She alleged that during her time at the network, the "arrangement" between the two of them helped her career, but she now regrets much of what she did for him. New York magazine reports that in addition to her own mistreatment, she helped lure younger employees "into one-on-one situations with Ailes that Luhn knew could result in harassment."

The New York magazine piece also reports that Ailes requested she come to his hotel room on multiple occasions for sexual encounters, and it started as early as 1991.

Though those allegations were made public a few years ago, the issues with Luhn are still ongoing even after Ailes' death. Earlier this year, Luhn filed a $120 million lawsuit against Fox News and its CEO, Suzanne Scott, per The Hollywood Reporter. She also sued Showtime over the series itself, accusing the network and Sherman "of violating her right to privacy." The latter suit was later dropped, Variety reports.

Annabelle Wallis plays Luhn in the Showtime miniseries, and the actress told The Hollywood Reporter that she came to a few realizations about her own biases, and the influence Ailes' brand of news while filming the show.

"I then realized that I am a product of Roger Ailes' world. I am [part of the] news absorbing, social media, sound bite generation. I'm of the generation that Roger Ailes is very, very influential of, and it's absorbing, knowing how to get people to react, even if it's for the wrong reasons, and creating this charged environment that makes our primal instincts react, and knowing that I can go into a place and judge someone's perspective of the news or the way they see the world, but I am full participant in enabling it."

It's unclear exactly how far The Loudest Voice will continue to delve into Luhn and Ailes' relationship, especially since she doesn't seem to be supportive of the story they're telling. But Sherman's original reporting regarding Luhn's alleged abuse spanned 11 hours of interviews and independent corroboration, the New York magazine report linked above states. So hopefully viewers can rest assured that they're getting the most accurate story possible.