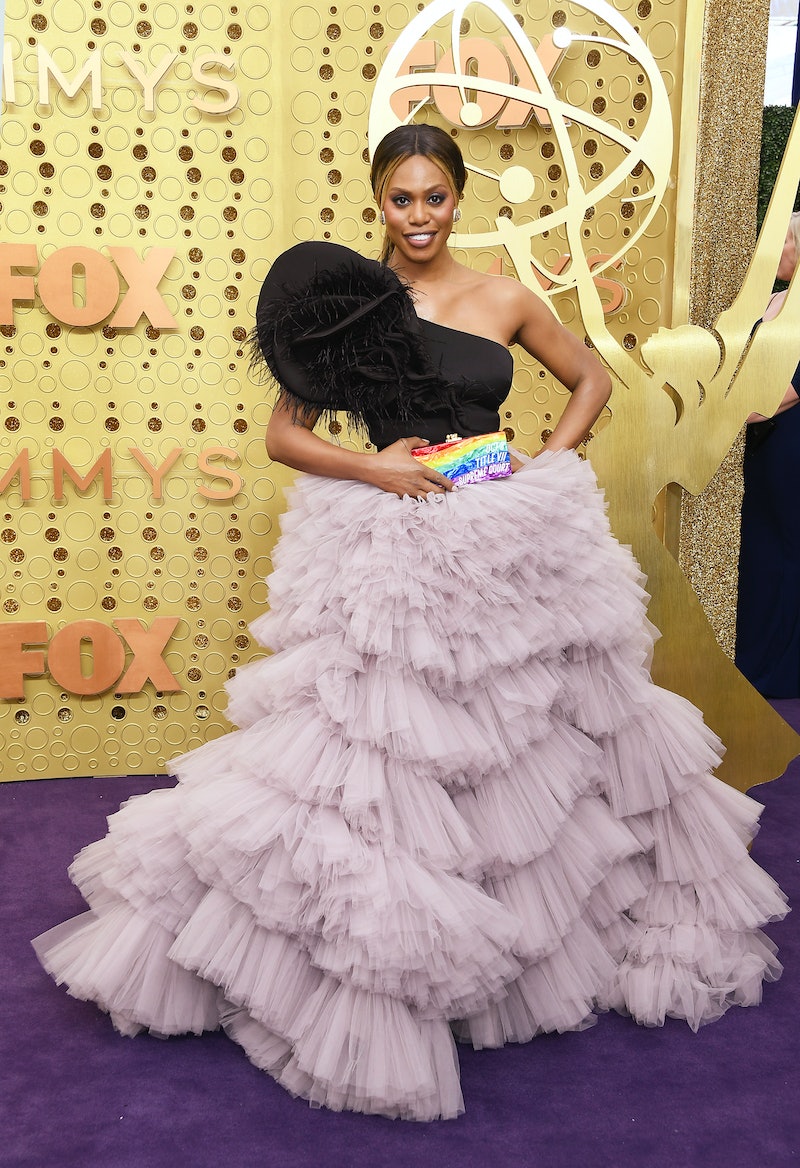 When Giuliana Rancic pulled them over on the E! Red Carpet early Sunday evening, Laverne Cox and her 2019 Emmys date, Chase Strangio, an attorney working with the American Civil Liberties Union, wasted no time in getting straight to business. Bypassing the usual small talk, Cox showed off her LGBTQ pride flag clutch and explained that she was walking the carpet with Strangio in the name of #RiseUpOct8, a movement to a raise awareness about the upcoming Oct. 8 Supreme Court arguments about whether Title VII of the Civil Rights Act of 1964 will apply to LGBTQ workplace discrimination cases.

Cox told Rancic that the minute she heard about "the incredible blessing" of being nominated for the third time in the Outstanding Guest Actress in a Drama Series for Orange Is The New Black, she knew that she wanted to use the visibility to talk about issues that mattered to her. She said, "I was like, 'This is weird.' I thought there has to be a bigger reason. I thought maybe it's about this case."

On Oct. 8, the Supreme Court will hear the arguments of three cases of reported LGBTQ workplace discrimination: Altitude Express, Inc. v. Zarda, Bostock v. Clayton County, Georgia and R.G. & G.R. Harris Funeral Homes Inc. v. Equal Employment Opportunity Commission. The Equal Employment Opportunity Commission has previously stated that the Civil Rights Act of 1964, the landmark decision that guarantees anti-discrimination protections on the basis of race, religion, national origin and sex, also applies to sexual orientation and gender identity. (That just means that you can't be fired, barred from employment, or harassed in the workplace for any of those reasons.)

However, the Trump administration filed a brief with the U.S. Supreme Court in August 2019, arguing that "sex" does not refer to gender identity, thus stripping the trans community of workplace protections. "The ordinary public meaning of ‘sex’ was biological sex. It did not encompass transgender status," the administration's brief states.

This is why Cox and Strangio want fans to follow the case, the #RiseUpOct8 hashtag, and support the ACLU in the name of showing support for the LGBTQ community, especially transgender people who would essentially be stripped of any anti-discrimination protections if the court eventually rules in the Trump administration's favor.

Strangio told Rancic that the eventual ruling would target "anyone who departs from sex stereotypes." He added, "Like all the fabulous people here, for example. So we really need to show up October 8th and pay attention. Their lives are on the line."

He's not wrong. While these specific cases deal with workplace discrimination, the lack of federal protections at work also lends itself to more stigma and prejudice against the community in general. In 2019 so far, 19 transgender women, most of them Black women, were murdered because of their gender identity, according to the Human Rights Campaign. In 2018, there were 26 reported deaths due to fatal violence against trans people.

Cox doubled down on her companion's comments, adding that she hoped people would show support for the LGBTQ community in the lead-up to the Oct. 8 SCOTUS arguments. "A lot of people aren't talking about this case and it has implications for the LGBTQ community. But it has implications for women and anyone who doesn't conform to someone else's idea of how you should be — a man or woman or neither!"

With Strangio, who also took over the ACLU's Instagram account for the night, on her arm throughout the evening, Cox succeeded in getting the word out about the Oct. 8 SCOTUS arguments and the impact they'll has for trans rights.

More like this
Yinka Bokinni Recalls Terrifying Truth At Heart Of 'How To Hire A Hitman'
By Frances Stewart
Travis Alabanza On Not Fitting In
By Sam Ramsden
Rylan Clark Is Ready To Party
By Sam Ramsden
Kimberly J. Brown & Daniel Kountz Looked Back On Their ‘Halloweentown’ Romance
By Stephanie Topacio Long
Get Even More From Bustle — Sign Up For The Newsletter