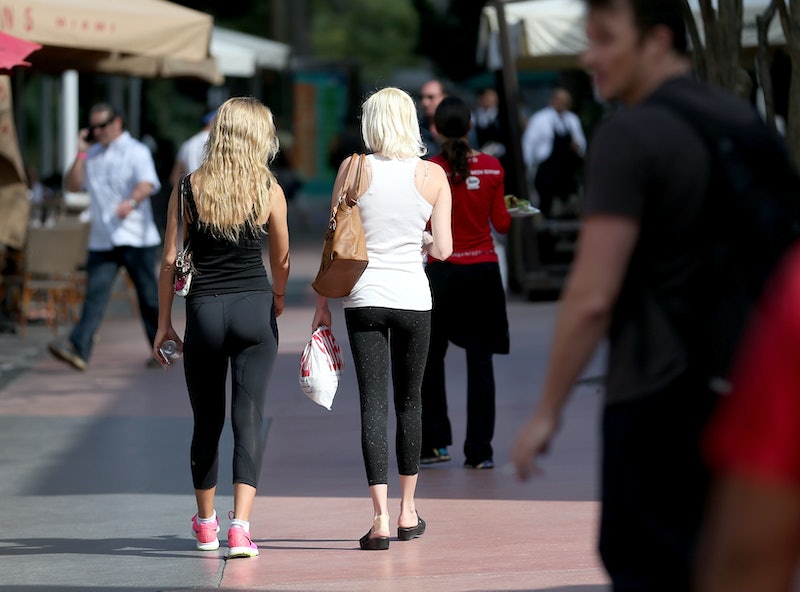 In an attempt to make city streets more welcoming for women, French lawmakers approved legislation Wednesday to outlaw sexual harassment and make catcalling punishable but fines of up to 750 Euros. But is catcalling illegal in the United States? Laws pertaining to street harassment in the U.S. vary state to state and can sometimes be complicated.

In California, for example, there is no law that explicitly outlaws street harassment. However, the state's Civil Code does prohibit harassment, which it defines as "unlawful violence, a credible threat of violence, or a knowing and willful course of conduct directed at a specific person that seriously alarms, annoys, or harasses the person, and that serves no legitimate purpose." It further states that such a course of conduct "must be such as would cause a reasonable person to suffer substantial emotional distress, and must actually cause substantial emotional distress to the petitioner."

California's Penal Code also defines the crime of stalking as someone who "willfully, maliciously, and repeatedly follows or willfully and maliciously harasses another person and who makes a credible threat with the intent to place that person in reasonable fear for his or her safety, or the safety of his or her immediate family." The global anti-street harassment grout Hollaback! has argued this criminalizes verbal street harassment that is malicious in nature or poses a threat to the victim's safety.

As information compiled by the nonprofit Stop Street Harassment points out, it's illegal to follow someone in a public place in Arkansas, with the intent of harassing, annoying, or alarming them. The state also prohibits attempts to solicit someone for sex, meaning that catcalls such as "how much?" are theoretically illegal. In Alabama, making an obscene gesture at someone is punishable by a $500 fine or up to three months in jail. In New Jersey, it's considered disorderly conduct to "offend the sensibilities of the hearer" in a public place with "unreasonably loud and offensively coarse or abusive language." In Washington, D.C., it is illegal to make "an obscene or indecent sexual proposal to a minor." It is also illegal to "engage in loud, threatening, or abusive language, or disruptive conduct that unreasonably impedes, disrupts, or disturbs" someone's use of public transportation.

But harassment laws can also vary from city to city. For example, in Atlanta, Georgia, there is no law criminalizing verbal harassment outright. However, verbal harassment using obscene and vulgar language of someone under the age of 14 is considered to be disorderly conduct and is prohibited by a city ordinance. The city also prohibits verbal harassment in which a person repeatedly solicits or requests another individual's company after that individual has given them a negative response. In Baltimore, Maryland, it is against the law to, with the intent to harass, alarm, or annoy, follow someone "in or about a public place" or "maliciously engage" in action that alarms or seriously annoys after being given a reasonable warning or request to stop.

In New York, state law criminalizes harassment and aggravated harassment in both the first and second degree. Harassment in the first degree can include intentional and repeated attempts to follow someone in public and/or repeatedly engage in acts that cause another person "reasonable fear or physical injury." State law defines harassment in the second degree as "acts with alarm or seriously annoy... and which serve no legitimate purpose" and as striking, shoving, kicking or subjecting someone to physical contact, or attempts or threats of physical contact.

But as the 2014 video entitled 10 Hours of Walking in NYC as a Woman showed, such piecemeal laws against harassment aren't necessarily being enforced in ways that make the streets safer or more welcoming to women. According to Hollaback!, the group behind the video, the female volunteer was harassed 108 times over the course of 10 hours. And as The Washington Post pointed out when the video was first released, some of the harassment the woman faced is potentially punishable under New York law by a $250 fine or up to 15 days in jail.