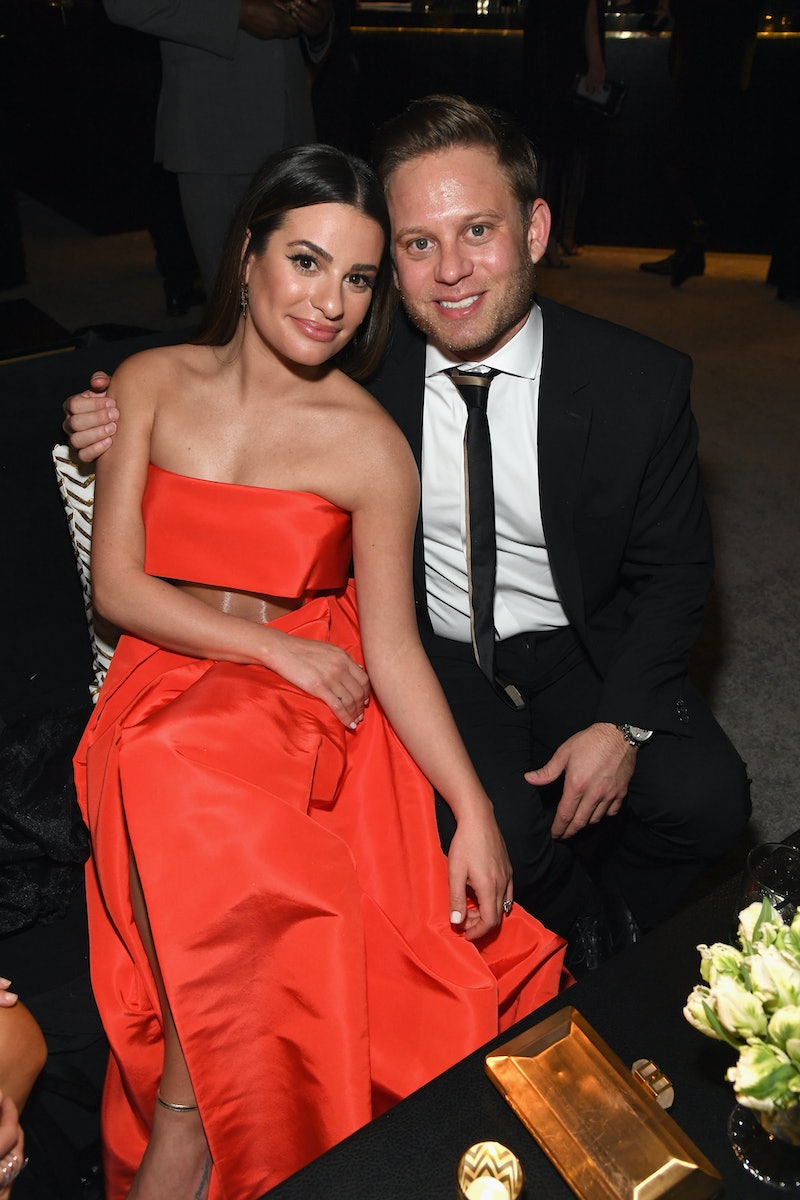 Never let it be said that there's no good news in quarantine. Lea Michele is reportedly pregnant with her first child, according to People. Michele and her husband, Zandy Reich, have yet to comment on the news, and Bustle reached out to a representative for Michele. However, a source reportedly confirmed the news, telling People, "They've always wanted to be parents."

The happy news comes almost two months after Glee actor and her entrepreneur husband celebrated their first wedding anniversary. They got married in March of 2019 near Napa, California, and ever since then Michele has been posting photos from her big day on Instagram. A few months ago, she shared what looks like a photo from her wedding reception to celebrate Reich's birthday, writing in part, "you made all my dreams come true and I love you so much."

Despite her frequent posts about her husband, the actor hasn't said much publicly about the prospect of having kids. Although, during an interview with On Air with Ryan Seacrest, she did say that she couldn't wait to dress up her future baby for Halloween. "I feel like sushi is number one on the list — I want my kids to dress up like a lion or a taco — everything cute and adorable I want that for sure," she told Seacrest in October of 2019.

Now, Michele and Reich have yet to confirm the news, but fans online are already celebrating. And, they couldn't help but notice the timing of Michele's pregnancy, namely that it's happening at the exact same time as Rachel Berry would be pregnant in the Glee universe. In the series finale, which aired in 2015, Glee fast forwarded to five years later, when Rachel Berry was pregnant as a surrogate for Blaine and Kurt. That's right: Rachel Berry is pregnant in 2020, and so is Michele. And the fans have noticed.

Is Lea Michele...actually Rachel Berry? Can Ryan Murphy predict the actual future? All these questions will now need to be answered. But there's one thing we do know: this baby is Gleek royalty, and fans couldn't be happier.

More like this
Hilary Duff's Husband Matthew Koma Has Her Name Tattooed On His Butt
By Jake Viswanath and Stephanie Downs
Vanessa Hudgens Is Reportedly Engaged To Cole Tucker
By Jake Viswanath
Ashton Kutcher Wants Danny Masterson “To Be Found Innocent” In Rape Retrial
By Jake Viswanath
At 28, Debra Jo Rupp Was Living A Much Different '70s Show
By Grace Wehniainen
Get Even More From Bustle — Sign Up For The Newsletter
From hair trends to relationship advice, our daily newsletter has everything you need to sound like a person who’s on TikTok, even if you aren’t.