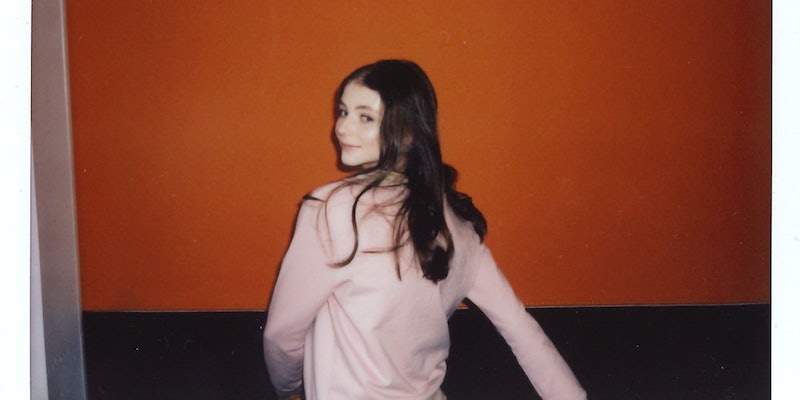 When celebrities hang out with Bustle editors, we want to give them the chance to leave their mark. Literally. So we hand them a pen, a piece of paper, a few questions, and ask them to get creative. The rest is up to them. This time, Leave No Trace star Thomasin McKenzie is leaving her mark in the Bustle Booth.

Picture this: a teenage girl with little previous acting experience stuns audiences with a raw, brave performance in a wilderness-set indie movie directed by Debra Granik. Sound familiar? Yet surprisingly, I'm not talking about Jennifer Lawrence in 2010's Winter's Bone — I'm talking about Thomasin McKenzie, the 17-year-old star of June 29's similarly-themed Leave No Trace. When the film premiered at Sundance in January, it garnered rave reviews, many of which confidently labeled McKenzie the next Lawrence. But while the teen is excited by the idea she might become a superstar, she's also, understandably, just a little bit freaked out.

"It’s scary because what if I don’t? I might break out, but I might not. I might not follow the same amazing career that she has," says the New Zealand-born McKenzie when she visits Bustle's office in May.

That fear is valid, but so is the comparison. In Leave No Trace, McKenzie gives a powerful performance as Tom, a teen peacefully living with her father in a Oregon national park until they're discovered and forced to leave. As Tom adjusts to living with other people, she discovers a sense of self separate from her father for the first time in her life, and McKenzie's portrayal of the character's journey is riveting.

It's the kind of work that's already earned her awards talk (I mean, just watch that clip above and see for yourself), and, yes, all those shout-outs to a certain A-list actor. But even if McKenzie is nervous about all that's undoubtedly to come, it's clear she's more than ready for whatever comes her way, as shown by the confidence in her answers to her Bustle Booth below.