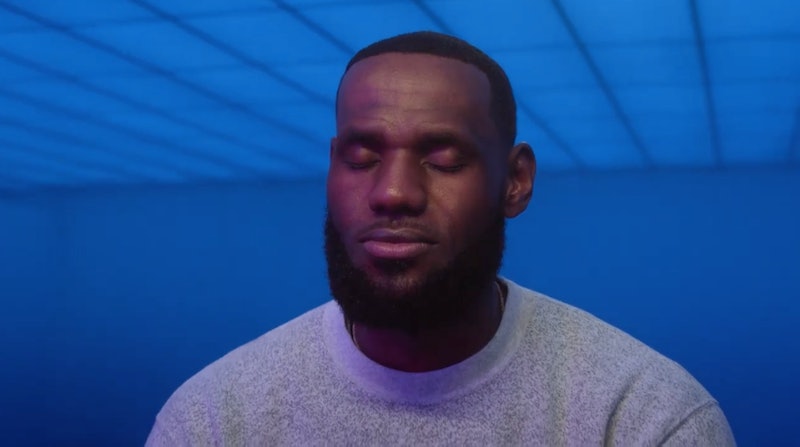 Every day, LeBron James opens up the Calm app to listen to "rain on leaves" as he readies himself for a nap and before he goes to bed at night. It's a soothing sound — the sound of drops of water as they pitter patter onto trees. It's the same sound that brought him comfort when he was a kid growing up in Akron, Ohio.

"Times were hard — single-parent household, no siblings, no father, and I remember those nights where it used to be raining... and I'm asking myself, why me? Why is this happening to me? Why is this happening to my mom? And I remember... seeing those raindrops hitting those leaves or hitting our window or hitting the concrete and just thinking, this is a beautiful sound. When I got to this app and saw that, it took me back to my childhood," James shares. Dressed in an orange Nike hoodie and gray sweats (he says he felt too "calm" to be bothered to wear anything less comfy), the three-time NBA champion and Lakers star announced his partnership with the sleep and meditation app at an intimate event in Hollywood on Monday night.

But the partnership is more than just James helping you fall asleep. The content series is called "Train Your Mind," created to emphasize how mental fitness is just as important as physical fitness. Before the end of the year, you'll be able to log onto Calm and listen to James share his wisdom on topics like managing emotions, sleep, and maintaining balance, all while being a professional athlete, an entrepreneur, a husband, and a father. Each "inspirational wisdom" session will be 10 minutes long and according to the Calm team, there will be more content rolling out throughout 2020.

Calm's co-founders, Michael Acton Smith and Alex Tew, tell Bustle that this partnership has been a year in the making, though it was an organic one. James has been a longtime fan of the app, thanks to his wife. But it's also a partnership that they've dreamed of since launching back in 2012.

Acton Smith says that when they launched the app seven years ago, they wanted to work with an athlete, as they thought of themselves as "the Nike for the mind." "We had this vision of one day having an athlete that's respected and loved around the world as a spokesperson and here we are — we couldn't wish for anyone better than LeBron, because he's more than an athlete," Acton Smith tells Bustle.

"For me, what gets lost in translation over time is that athletes forget that there's more than just a physical side," says James. "At this point in my life, it's not that I've recognized that the mental side is important — I knew that as a kid when I was younger, but now I'm at a point in my life where I'm able to tap into it and take advantage of it. And take advantage of the benefits because there's only so much you can do with the physical. There's only so far you can get with the physical side."

James says that while he and his fellow athletes are all training to be the best and "lifting weights and running extra" and doing things they can do to physically maintain, it can oftentimes not be enough. What's more important is the mental game.

"I believe that when you have this here and this is the strongest," James says, pointing to his head, "sometimes when the physical fades away, you can still be at your best because you're still head over heels on the mental side. And for me to be able to train my mind, as much as I train my body — that's why I'm able to still do the things I'm able to do now, 17 years in the league, over 47,000 minutes played in the NBA, and still running with the 20-year-olds," he says, flashing a smile to the room.

Tew and Acton Smith share that LeBron was very hands-on when creating content for the app and that they worked closely with him and his team to make sure they captured different parts of his life, beyond the court.

"He's had such a rich, varied, fascinating life, so it's everything from fatherhood advice to teamwork advice to preparation for a game," Acton Smith says.

"It really is his voice and his story. Just really valuable wisdom that the Calm user base will really love," Tew adds.

Another element of the partnership is providing the students and staff at the I PROMISE School — a public elementary school in Akron, Ohio, specifically aimed at at-risk children supported by the LeBron James Family Foundation — access to the content series.

"We have this ambition to strengthen 1 million young minds and so where better to start than the LeBron school," Tew tells Bustle. "We're basically giving free access to all the kids and the students, the staff, and their families in the wider community, and we're going to see how that goes and gradually expand that to the next group and find other schools we can work with and other groups of young people who we can really help provide tools that, as LeBron said in his talk, really set them up for life."

While the majority of Calm users are adults, Tew — along with Acton Smith and James — hope they can encourage the next generation of young people to practice meditation and as a result "impact the world in a positive way." It's an ambitious goal they've always had, but with James on their side, the notion no longer seems so far-fetched.

More like this
You Can Save Up To $200 On Theragun Massagers For Black Friday
By Kristine Fellizar
Emily Ratajkowski & Pete Davidson's Astrological Compatibility, Revealed
By Nina Kahn
Bustle Daily Newsletter: November 23, 2022
By Hayley Schueneman
The 15 Best Gifts For Peloton Users — & They Start At Just $14
By Maria Cassano
Get Even More From Bustle — Sign Up For The Newsletter