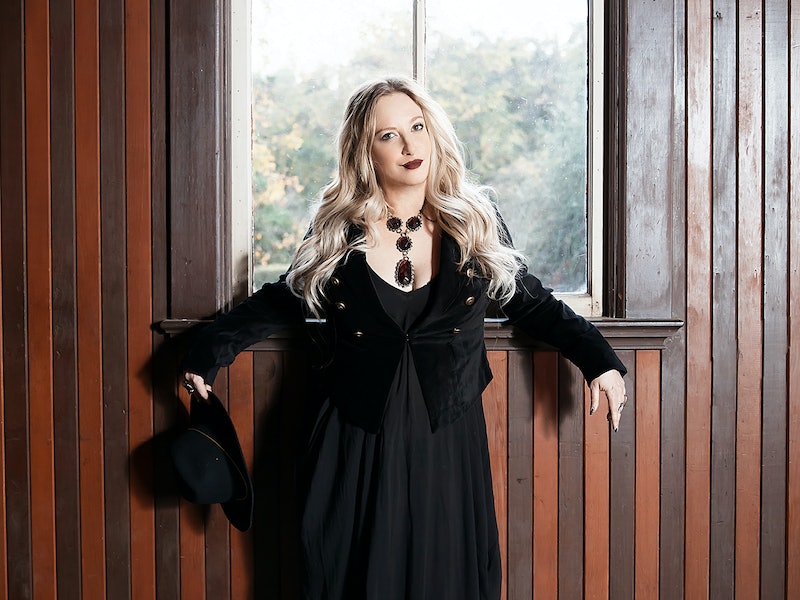 She was walking home from the post office during her freshman year at Yale when it happened.

"I was reading a letter," Leigh Bardugo tells me, "and I looked up from the letter, and I was standing on Grove Street. On my left was this giant white marble mausoleum covered in wrought iron snakes, and on my right was a giant new Egyptian gate that said 'The Dead Shall Be Raised.' And I, the young goth child from Los Angeles, was like: 'I have come home.'"

Bardugo knew then that she wanted to write a fantasy novel set in the tombs of Yale’s secret societies, but it would take her over a decade, as well as writing and publishing eight wildly successful young adult novels (among them the bestselling Grishaverse series, which Netflix is in the process of adapting) to figure out how to approach what would become Ninth House, her adult debut.

That moment on Grove Street may have planted a seed, but it wasn’t until years later, when a friend started texting her pictures of their years at Yale in advance of a college reunion, that Bardugo really understood what she wanted Ninth House to be about.

"It was like this punch to the gut," she says. "There was no sense of nostalgia. I think I was supposed to feel some kind of warm sentiment when I saw these photos, and instead I felt like, 'Oh. Here's the reckoning.'"

Because while Bardugo has "very warm memories of Yale," she says, being confronted with images from her past reminded her that not everything that happened to her there was positive. "That was the start of me excavating the truth of my experiences there, and my friends' experiences there," she says. "And it was not comfortable."

The result is a book that is, at times, deeply uncomfortable to read, as it grapples with the grayest areas of trauma, desire, addiction, power and privilege. Ninth House imagines that each of Yale’s Ancient Eight societies practices a different form of magic; a shadowy ninth house, Lethe, keeps watch over them. The book’s heroine is Galaxy Stern, better known as Alex, a Los Angeles native whose natural ability to see the ghosts these societies’ magic attracts makes her an invaluable asset for Lethe.

What Lethe claims as a gift has been, for most of Alex’s life, a curse: Like so many women, she sees things that the people around her insist aren’t there — though in Alex’s case, the haunts are literal.

Before she arrives at Yale, Alex has been subject to various kinds of violence from the living and the dead. So at first, she’s seduced by the dream that the place seems to offer: the kindness of her roommates, the idea of a summer internship in a dean’s office, and the promise of normalcy, stability, and even comfort. But as the façade of the institutions that have embraced her fall away, she finds that behind them is a world no less violent and ugly than the one she left behind.

"We can banish those literal monsters, but to banish the figurative monster at the same time does a tremendous disservice to readers."

In writing Alex, Bardugo says she set out to create an anti-hero — not an unlikeable female character, but a straight up anti-hero. "I think Alex has been punished enough," she says. "And there was something really thrilling for me to just put a bat in her hand and let her go to town."

And while Alex is definitely tough in certain ways, it was important to Bardugo that she also always be actively dealing with what’s happened to her throughout the book: that the literal demons she vanquishes don’t stand in for her trauma, which will always, to some extent, be a part of her life.

"Monsters often operate metaphorically in fantasy. We can banish those literal monsters, but to banish the figurative monster at the same time does a tremendous disservice to readers, because trauma doesn't finish with the last page of a book,” Bardugo says.

"And for those of us who live with any kind of trauma in our past, the idea of purging it in some kind of magical way is offensive. Because we want to believe ourselves heroes who conquer these demons, and then when they keep coming back you think, 'Didn't I already fight this one? Am I not a good hero? Am I not deserving of a hero's narrative?'"

It’s precisely the dark and difficult subjects that Ninth House grapples with that led to a certain amount of pre-publication controversy around the book, which kicked off in earnest after copies were handed out at the Young Adult Literary Convention, or YALC, in June. (Bardugo says that when she asked whether this was appropriate, given that Ninth House is not a YA novel, she was told that other adult titles were also being made available at the festival.) Early readers started tweeting out trigger warnings about the book’s content, which led to calls for the book itself to be printed with those warnings included.

Bardugo thinks there should absolutely be a conversation about trigger warnings on books, but she feels strongly if they’re going to happen, they should be an industry-wide requirements, enforced by publishers. "Otherwise, all it does it stigmatize particular books," she says. There have been no similar campaigns around the work of male horror authors like Stephen King and Joe Abercrombie, she notes.

But beyond that, Bardugo is concerned by the ways that she’s been asked to justify her writing: by trotting out her own trauma as evidence that she’s allowed to do this work.

"In talking about other characters, I've talked about the fact that I'm a survivor of sexual assault," Bardugo says. "But I don't believe that I should have to put that on display to justify writing a novel. I'm disturbed by the performances we require of women authors. There's this wall that drops where people feel like you have, by writing a book, given them permission to bring out into the open the deepest parts of yourself."

Either way, Bardugo remains unapologetic about the book’s actual content. She knows that distilling Ninth House to a list of trigger warnings doesn’t do its story justice — that she strung together those disturbing incidents not just for shock and awe, but in service of a larger truth.

"I came here to write a book that's going to f*ck you up a little."

"The response of, 'Oh, this person just wanted to write about horrible things' disturbs me. It presumes a kind of mercenary approach to writing that is so alienating," Bardugo says. "You give your heart to a book. And sometimes the book eats your heart, and sometimes it returns your heart whole."

And anyway, what’s so wrong with a little bit of boundary-pushing? She says, "I have been accused of writing for shock value. And of course my defensiveness says, 'No I haven't! I was telling the truest story I could.'"

Ninth House will f*ck you up, but that’s not all it will do. Like all of Bardugo’s young adult novels, the world of Ninth House is richly imagined and remarkably textured. The book manages to conjure New Haven’s gothic aura as well as its modern urban reality with equal veracity. (If you went to Yale, there’s a joke about Yorkside in there that’s particularly delightful.)

And Alex is not just hurt, and hurting; she and her sidekick, the blue-blooded New Haven native Darlington, are carefully drawn in their roles as normal people trying to survive desperately abnormal circumstances. A scene in which a young Darlington catches his first glimpse of magic — which he won’t witness again until Lethe finds him pursuing it with suicidal fervor as a teenager — will feel achingly familiar to anyone who grew up seduced and then betrayed by the lure of fantasy novels.

Ninth House is just as much about hope and friendship as it is about corruption and despair. "Yale is the first place Alex is free to open herself to connection," Bardugo says. "She does it tentatively, she does it warily, but she does form these attachments. She is somebody who is hungry to connect the way most people are, but has been damaged by her attempts to connect previously. The real chance she's been given here is to have allies, and she does. And that's how she's able to succeed."

"There's this incantation you put on the page that suddenly brought all of these people into your world."

That’s why the book is dedicated to Barudgo’s college roommates, for the many rescues: "Because that is what we did," she says. "We didn't really know it— we didn't have language for what we were doing — but that is what we did. We held each other up."

These days, Bardugo tries to avoid Twitter as much as she can, though she admits that initially she was too curious about the reaction to Ninth House to stay away. She quickly discovered that it was "either a five-star or a one-star. But you know, I feel kind of okay about that," she says. In this case, the good reviews outweigh the bad ones. Finding people who relate deeply to Ninth House is more important to her than being reminded that, inevitably, there are those it doesn’t work for.

And when the book does find its readers, it feels like magic every time, Bardugo says. She doesn’t think about a potential public when she writes (“It will paralyze me”); she tries to enjoy the story for its own sake, letting it unfold and allowing it to show her what she needs to say.

So when those private hours finally become public and someone says, you must have written this for me, it "really makes you feel that you have, in fact, uncovered a magic spell," Bardudo says. "There's this incantation you put on the page that suddenly brought all of these people into your world. It's a secret power you didn't know you had."

Bardugo laughs. She recognizes this narrative—she’s written it herself once or twice. “In that way, it's a very YA story.”

You can now order Ninth House by Leigh Bardugo.