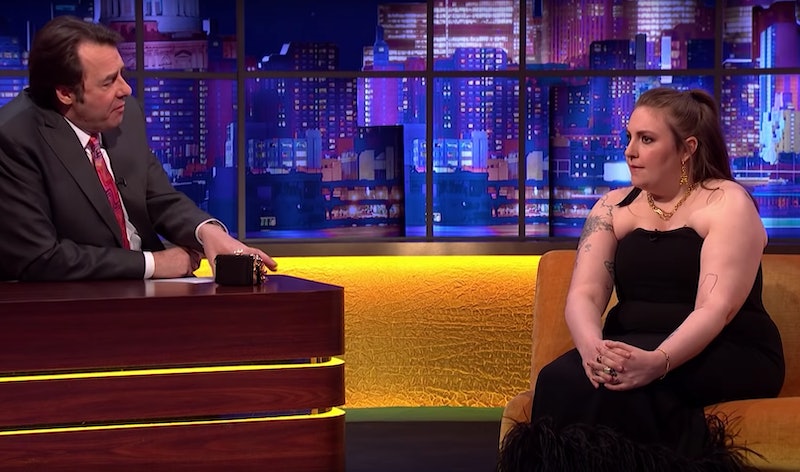 As fun as the search for love can be, IMO dating can get pretty tedious — and nerve-racking. As bas as it is, I usually rely on a little bit of liquid courage to get me through the initial awkwardness. And it seems I’m not alone in my thinking, as Girls star Lena Dunham said dating in the UK while sober is a “roughie.” While appearing on The Jonathon Ross Show, the writer and actor revealed that making the decision not to drink proved challenging when it came to dating in Wales.

Dunham moved from the heady heights of New York to the lush countryside of Wales over the summer to film her new HBO series, Industry. Variety said that she has directed and executive produced the eight-part finance drama focusing on the lives of a group of twenty-somethings trying to make it big. Describing Wales as “romantic” and “cosy,” she told Jonathan Ross it’s a far cry from her normal life in the U.S, saying: "I’m from New York City. I've never even been above 14th Street. Suddenly I’m in Wales sitting in a turret in a little castle like I’m freaking Charlotte Brontë. The whole thing was so romantic." She went on to explain: "I was recovering from a broken heart."

When asked whether she's been dating in the UK, Dunham said that one of the most challenging things was trying to date while sober:

"Here’s the thing that I’m finding about dating here. I love being in England, I love the culture, I love the people. I’m sober, it’s a choice, and I would say sober dating in the UK is a roughie."

She continued, "It was easy to find guys when I would drink because I would drink a lot, go over to their house, throw up and then they would have to let me stay. But in Wales when I was being a polite woman of dignity and grace? Much more challenging."

It’d seem that even the stars find it difficult not to have a glass of wine to help ease along a first date. It's good to know they're just like us, isn't it?

You can catch Dunham’s full interview with Jonathan Ross on ITV catch up.

More like this
Molly-Mae & Tommy Fury Revealed Their Baby Girl's "Really Unusual" Name
By Sophie McEvoy and Sam Ramsden
Joey Essex Is Rumoured To Be Dating A 'Love Island' Favourite
By Sam Ramsden
'Love Island' Has Added Yet Another Bombshell To The Villa
By Bustle UK
Yes, 'The Price Of Glee' Is Available To Watch In The UK
By Catharina Cheung
Get The Very Best Of Bustle/UK
Sign up for Bustle UK's twice-weekly newsletter, featuring the latest must-watch TV, moving personal stories, and expert advice on the hottest viral buys.