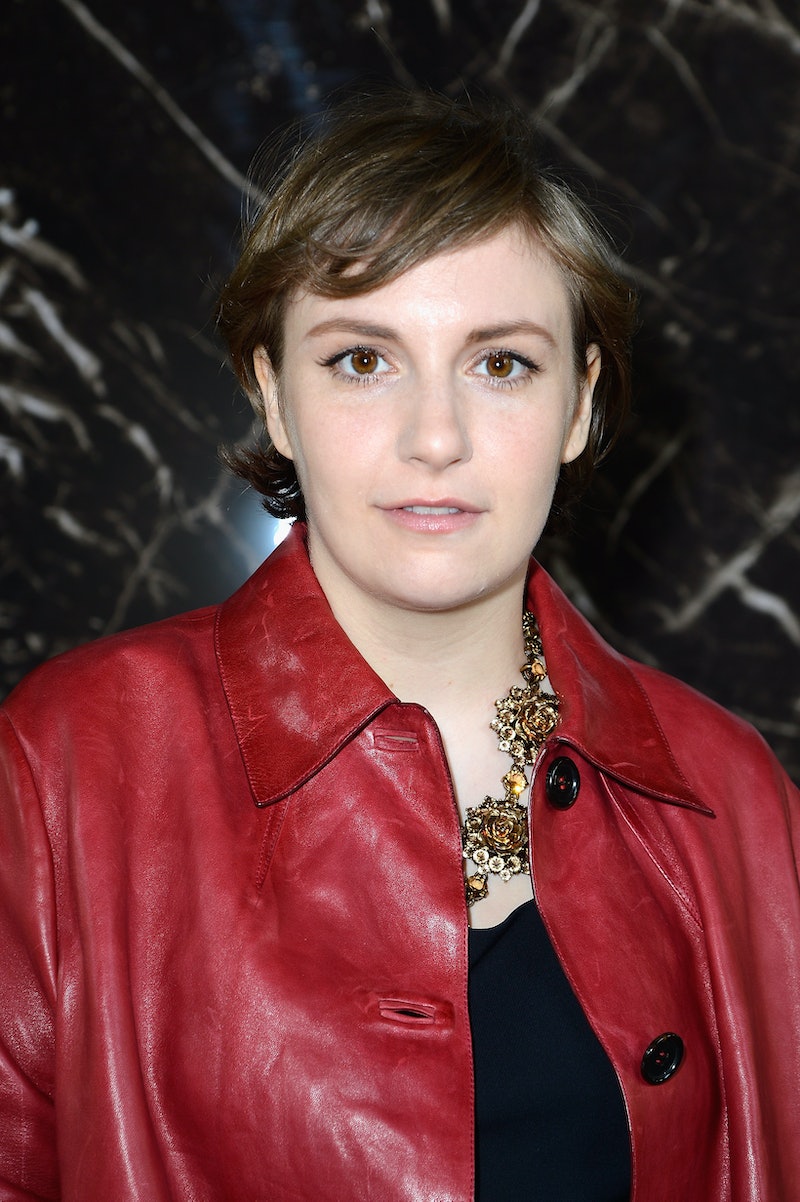 For people living with anxiety, anti-anxiety meds can be a lifeline. However, a certain class of medications known as benzodiazepines also come with a higher risk for abuse and addiction. Actor and author Lena Dunham says she is six months sober after "misusing" Klonopin, People reported. On Dax Shepard's podcast Armchair Expert, Dunham said: "I was having crazy anxiety and having to show up for things that I didn’t feel equipped to show up for. But I know I need to do it, and when I take a Klonopin, I can do it."

Klonopin, the brand name for the medication clonazepam, which is part of the class of medications known as benzodiazepines, was originally developed for treatment of seizures, Manish Jha, MBBS, assistant professor of psychiatry and assistant director of mood and anxiety disorders program at the Icahn School of Medicine at Mount Sinai, tells Bustle. A lot of anti-seizure drugs are prescribed off-label for anxiety and depression, and Jha says that Klonopin has been shown to be effective as a short-term treatment for people with panic disorder.

"The challenges with these kind of medications is that their utility for longer-term use has not been established. That's why our recommendation is to use Klonopin for a brief period, then use medications such as SSRIs." He cautions against using it as a first-line of defense for those with generalized anxiety disorder.

In Dunham's case, she says she took Klonopin for several years. Dunham told Shepard that she started taking it for anxiety and increased her dose after being diagnosed with PTSD. "If I look back, there were a solid three years where I was, to put it lightly, misusing benzos, even though it was all quote unquote doctor prescribed." She also recently revealed in an Instagram post that she is living with the chronic pain condition fibromyalgia, and she has been public about having a hysterectomy at age 31 to relieve symptoms associated with endometriosis.

"I have a few sexual traumas in my past and then I had all these surgeries and then I had my hysterectomy after a period of really extreme pain. It stopped feeling like I had panic attacks and it started feeling like I was a living panic attack. The only thing that was notable was the parts of the day where I didn’t feel like I was going to barf and faint," PEOPLE quoted Dunham as saying on the podcast.

While at first, Klonopin reportedly made Dunham feel like she was the person she was "supposed to be," over time that changed, and Dunham said she was afraid of getting off of it. Dunham told Shepard that eventually she was went from taking Klonopin to relieve travel anxiety to taking it just because she was awake. She noted that as someone who's had experience getting off opioids prescribed for pain, she didn't realize how much harder it would be to stop using Klonopin.

Jha notes that it's important to know that dependency is different than abuse and, because the body makes adjustments for the medication, anyone taking this type of medication for more than a few weeks will experience withdrawal symptoms when stopping it suddenly. This is why it's important to be aware of these effects up front.

Lindsay Chester, LCSW, CASAC, tells Bustle that it's important to let patients know of the risks of taking medications like this, and that patients are up-front about their relationship to substances. "If you do have a family history of addiction, or have had a history of abusing other substances but believe a medication like Klonopin would be helpful, it's best to seek the help of a mental health provider who identifies as having familiarity with such issues," she says.

"Even if you're taking it as prescribed, the body can still get used to it," Jha says. "That's why the recommendation is that if you're taking it for some time, and you want to stop taking it, the idea is that you do it gradually over a period of weeks or even months [under the care of your doctor]." Dunham said she weren't told about these risks when she began taking Klonopin.

While Klonopin and other drugs like it do have therapeutic benefits, their potential for misuse means that you need to educate yourself up front. "These are very useful medications when used appropriately," Jha says, "but these medications are not indicated for long-term treatment of anxiety." Benzodiazepines also should not be taken while pregnant. What's more, if you are on benzodiazepines long term, talk to your doctor about treatment alternatives such as SSRIs in tandem with cognitive behavioral therapy.

Jha says that a sign of overuse of any drug that both doctors and patients should be aware of includes running out of the medication before the prescription is due to be refilled. This is why he recommends that Klonopin only be used for a short time and only for panic disorder. Anyone taking Klonopin should be aware of its potential for misuse and be monitored closely by their doctor.

"Even if only taken for several weeks, the body has had time to get used to it," Jha explains. "The recommendation would be to work with the doctor who prescribed it to get off of it." Despite a step-down plan, Jha says withdrawal symptoms can still be expected in some patients, and can include anxiety, sleep disruption, restlessness, and more. Stopping the medication suddenly can even lead to seizures. What's more, all psychiatric medication has a potential for withdrawal symptoms, and treatment should not be stopped or modified without consulting your doctor.

"If you suspect you are dependent on Klonopin or any Benzodiazepine asking for help is the most important initial step an individual can take," Chester says. "Seeking the help of a mental health professional is particularly important when discussing chemical dependency to a drug like Klonopin."

Everyone reacts differently to these medications, but many people aren't warned about the risk of misuse or developing a physiological dependency on them. While there is zero shame in taking medication to treat a mental illness, it's important to ensure, for your own safety, that you understand your treatment plan, including side effects, fully.