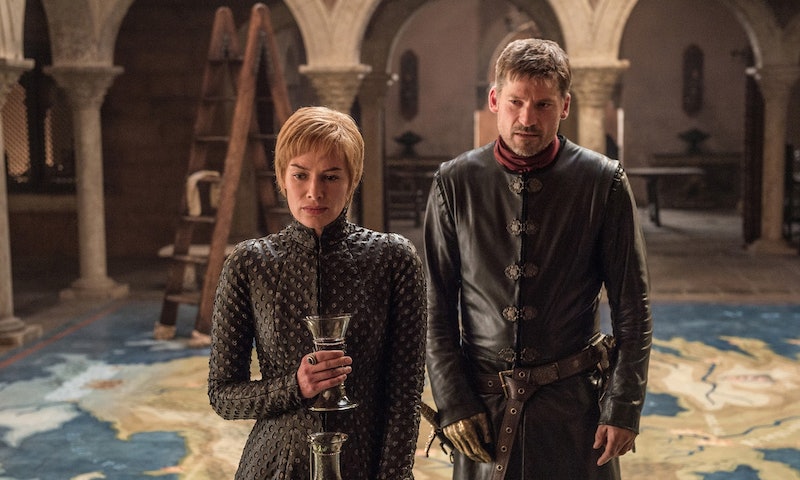 Surprisingly, in her most recent TIME interview, Lena Headey seemed to imply that Cersei and Jaime could split up in Game Of Thrones Season 7. The implication was been done with immense subtlety of course. After all, we're talking about the show that almost fired Gemma Whelan for simply revealing she would be playing Yara Greyjoy. But, all the same, the way Headey talks about the Lannister's relationship is worth launching several fan theories that it won't all be smooth sailing for them.

In her TIME interview, on being asked about how she cultivated chemistry with her costar in a relationship that unsettles people, she responded:

"With Cersei and Jaime, we’ve always talked about it — Cersei’s always wanted to be him. Therefore, for her, that relationship is completion. There’s been an envy, because he was born with privilege just for being a man. I think their love was built on respect. He truly loves her, he’s truly in love with Cersei, but I don’t think her love was pure love, I think it was respect and a kind of need."

After six seasons of watching the incestuous brother-sister duo make out, push that poor Stark kid out of a tower, and always be on each other's side, it's unsettling to hear that the actor who plays Cersei doesn't believe her character feels "pure love" for Jaime. Of course, Cersei has always been ruthless, self-interested and manipulative, but, given her loyalty to Jaime, it wasn't necessarily immediately obvious that her emotional reservation extended to her brother, too.

In her New York Times article in July, there was an even more subtle nod to a possible growing apart of brother and sister. The article states:

"Viewers shouldn’t expect any radical changes just because she’s now on the Iron Throne, Ms. Headey said. The reign of Cersei I will be based in the same sort of self-serving, Lannister-promoting strategy we’ve seen before, just with fewer restraints."

In Jaime's last major narrative arc of Season 6, we saw him grow in empathy and kindness. He's become less of a Lannister, not more, in his diplomatic mission to reclaim Riverrun for the Freys. Instead of using brute force as the old Jaime might have, he engaged in a long series of talks with everyone involved and eventually used an emotional plea to sway Blackfish, warning him that he would do anything for his love for Cersei.

This was in contrast with Tommen's mother's tyrannous behavior, with her blowing up an entire Sept of people to get her power back. Nikolaj Coster-Waldau seemed to support this theory of him growing apart from his sister in how he lives his life in his Time interview in July in which he stated:

"His life has been lived on Cersei’s terms. His whole life has been close to this woman: how do I serve her, how do I keep this secret. It’s all been about her and it still is, but now, I think he comes to a point when he suddenly has to rethink that way of life."

Of course, this would support one of the strongest fan theories sparked by the last we saw of Jaime and Cersei, when she takes the Iron Throne and he watches, first in confusion and then in distaste, presumably realizing that Tommen is dead. The fan theory argues that Jaime may kill his sister, like he did with King Aerys II because she reminds him of the Mad King. He responded to this theory to the Huffington Post in April:

Whichever way you slice it, things don't look great for Westeros' most controversial couple. Add into the mix the prophecy of Cersei's death from the book, which reads, "The valonqar [High Valyrian for "little brother"] shall wrap his hands about your pale white throat and choke the life from you," and there's a growing chance that the little brother the book refers to will be Jaime, not Tyrion. Cersei better sleep with one eye open.