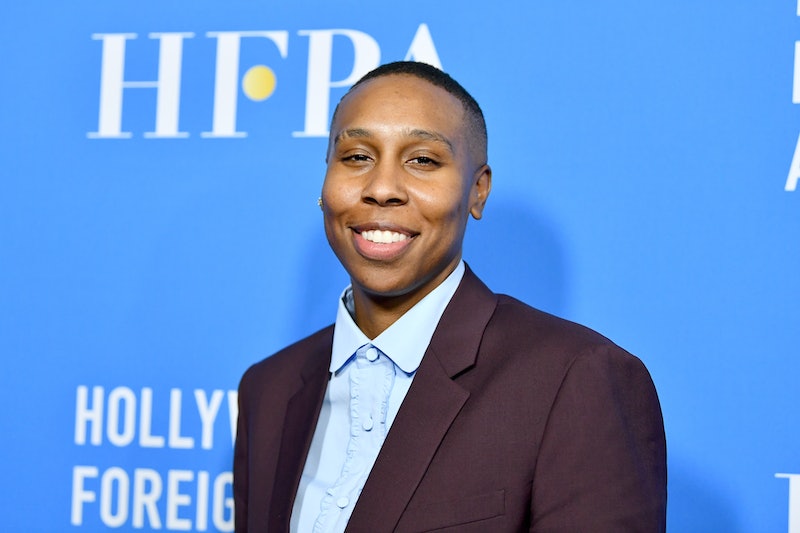 Celebrities change their hairstyles all the time. Some, like Kylie Jenner and Zayn Malik, change theirs almost daily. But others put a bit more thought into the chop. Lena Waithe shaved her head, and it's not a move to fall in line with the latest trend. The writer, producer, and actor's message behind the chop makes a major statement about the relationship between femininity and queerness.

You're probably used to seeing Waithe with long braids pulled into a ponytail or messy bun. She stepped onto the Hollywood Foreign Press Association’s red carpet with, well, no hair at all. When asked about the chop during a red carpet interview, the conversation got real.

Waithe started out the Variety on-carpet interview by jokingly saying, "I've gotten gayer, guys." She was referring to her newly shaved head, which was done by "Barber Doll The Slayer," according to the star's Instagram post. But Waithe got a little deeper with her answer as the interview went on.

"I was holding on to a piece of femininity that would make the world comfortable with who I am, and I think I thought for a long time, 'Well, if I cut my hair, like, I'll be a stud... or I'll be a butch. I always thought, 'no, I'm not that. I'm, like, so soft," Waithe said in the interview. "And I said, 'oh, I've got to put that down, 'cause that's something that's outside of me."

That wasn't the only way that Waithe stepped into her true self for the night, either. She mentions in the interview that not only did she chop her hair, but she also stepped out in a suit with no makeup on.

"I cut it and I felt so free and so happy and so joyful, and I've really stepped into myself. And if people call me a butch or say, 'she's a stud' or call me "sir" out in the world, so what? So be it," Waithe says.

The conversation brings to light the relationship between black femininity and queerness. Waithe touches on the fact that she had been thinking about the haircut for a while, but was holding onto it for everyone else. The way that she talks about feeling free now is a lesson that everyone can take something away from.

You can control how you present yourself to the world, but you're never going to be able to control what people say about you.

The conversation is far from over, even now that the hairstyle was addressed. Waithe posted a photo of herself from the event on her Instagram Stories with the caption, "no more filters."

Someone responded to a tweet about her new hairstyle, saying that the cut is "stupid" because she's "not even the first female celebrity to have a shaved head." To which she replies, "All the white women you mentioned did it for movies. The women of color did it for freedom. Bye."

A haircut is a way to tell the world about you while not having to even open your mouth. You can control how you feel most comfortable, but you can't control what people will say about it. Waithe proves that you don't have to hold onto anything — femininity, length, color — for anyone.