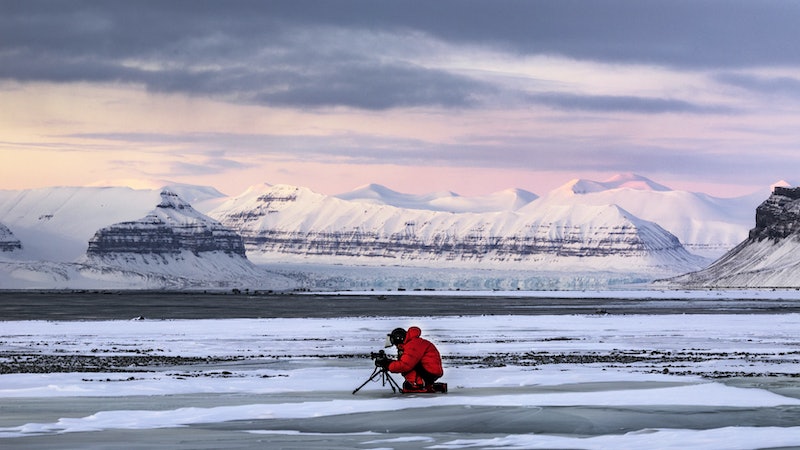 Climate change documentaries can be hard to watch. Facing the potentially disastrous future of our planet can trigger climate change anxiety. George Marshall, founder of the Climate Outreach and Information Network, wrote the book Don't Even Think About It: Why Our Brains Are Wired to Ignore Climate Change, to explore why many prefer not to think about the issue, even as we acknowledge it to be pressing. But scientists around the world still fight on and have been actively working to solve the problem. In Ice on Fire, a new documentary airing on HBO June 11, producer and narrator Leonardo DiCaprio offers a look at the devices, methods, and policies that have the potential to slow or even reverse climate change. In that way, Ice on Fire offers a glimmer of hope that other climate docs have not.

"Science tells us that our current climate crisis is a problem we've created, but it is also a problem that we can fix," DiCaprio says Ice on Fire. For sure, the first third or so of the movie does dip into the dour realities of what has caused the global warming, mass extinctions, and weather anomalies that currently plague our planet. In the piece of the the film that explains the crisis, it may remind you of An Inconvenient Truth, or DiCaprio's first collaboration with Ice on Fire director, Leila Connors, 2007's The 11th Hour, which features 50 scientists, politicians, and environmentalists detailing the lead up to the final moments before climate change passes the point of no return. But thankfully, after revisiting the major problems we've already faced and reiterating the potential world-ending consequences of our mistakes, the mood of Ice on Fire shifts to focus on what we can do to stop it.

Ice on Fire explains that, in order to stop climate change, not only do we need to reduce our carbon emissions, but we also have to do something about the CO2 that we've already released. So, in addition to exploring the potential impact of solar energy, wind energy, and tidal energy, which creates electricity out of the ocean's waves, the doc offers up the other half of the solution: Project Drawdown, the process of "pulling CO2 out of the atmosphere and oceans and sequestering it underground or into new materials," as the doc explains.

And the methods invented to accomplish the goal of Drawdown are nothing short of amazing. There's Biochar, a form of charcoal that captures carbon dioxide, which, if put in just 10% of the world's soil could collect 29 billion tons of CO2. Direct Air Capture Machines, which literally suck the CO2 out of the atmosphere, can convert carbon from the air back into jet fuel, feed greenhouse farms, or literally turn the carbon into stone. Ocean scientists look to increase "Marine Snow," the organisms that absorb carbon in the deep sea, while Harvard professor Daniel G. Nocera has created artificial and bionic leaves that absorb carbon much faster than natural leaves. The possibilities, Ice on Fire suggests, are endless.

“My partners and I made Ice on Fire to give a voice to the scientists and researchers who work tirelessly every day on the front lines of climate change,” says DiCaprio in the film's press notes. “We wanted to make a film that depicts the beauty of our planet while highlighting much-needed solutions across renewable energy and carbon sequestration. This film does more than show what is at stake if we continue on a course of inaction and complacency — it shows how, with the help of dedicated scientists, we can all fight back. I hope audiences will be inspired to take action to protect our beautiful planet.”

And action on our part is necessary, because it's not just the big companies and huge labs that can help move the needle. Ice on Fire also features everyday people participating in climate change reversal, including a small-time fisherman in Connecticut who stopped fishing and started harvesting kelp and oysters. (Oysters suck up carbon in the ocean, while kelp, when fed to cows, reduces their methane output by 90%, the doc says.) Urban farming can also have a significant impact. Ietef Vita and Ron Finley run small gardens, one in an abandoned swimming pool, in Los Angeles. One urban farm, the film details, can offset the carbon emissions of seven cars.

So not all is lost, despite what you may be feeling or dreading. People like us can help, and we can support politicians who put forward green policies. Also, the doc notes, the potential profit to be made from creating these solutions is about to surpass the profitability of contributing to the problem. That means that green projects are growing less expensive, providing more jobs, and leading to more business than even industries like coal and fracking.

So take a break from ignoring climate change and get more informed. Ice on Fire won't make you feel as helpless as you fear.