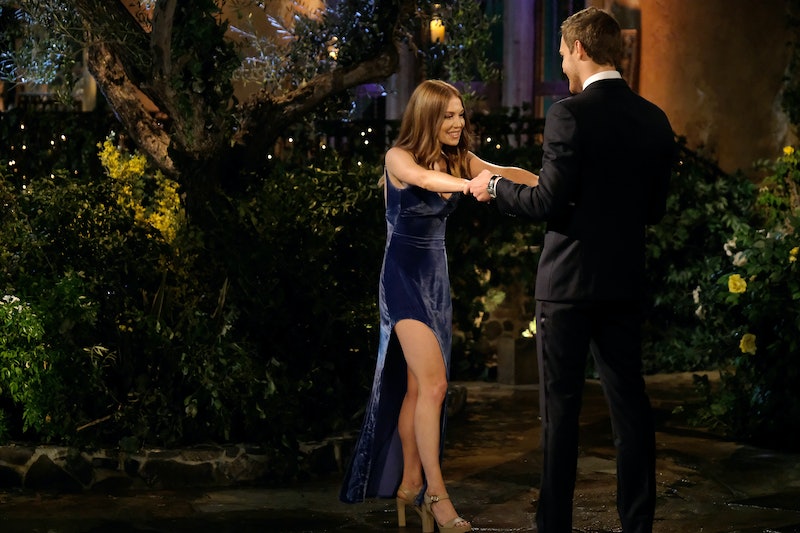 Whether you meet out in the real world or on a reality dating competition, to make a longterm relationship, both parties have to share at least a couple common interests. Judging from her bio and social media accounts, Peter Weber's Bachelor contestant Lexi Buchanan may actually have what it takes to get close and really bond with Peter.

Lexi's official ABC bio says that she's 26 years old and grew up in Jacksonville, Florida and has six siblings. She apparently moved to New York City with a really serious boyfriend, but they eventually broke up. Since then, she's been living in NYC working as a marketing coordinator for a real estate company. Although she's been "on a number of bad and mediocre dates" she came on the show in order to find the "future father of her children."

That sounds serious, but Peter literally cannot stop talking about how important his family is to him and that he's looking for a "co-pilot" to spend the rest of his life with. So, with six siblings and a desire to have children, it seems like Lexi and Peter at least share the same goals. (She also has a sense of humor, sharing that she thinks dating as a redhead is hard to do and hopes that Peter likes "gingers.")

Of course, as anyone who's been in a relationship knows, wanting the same things doesn't always mean that the love with last. But it does seem like Lexi and Peter could get along, judging from her Instagram account.

Based on all the photos Lexi has posted from various parts of the globe, she has developed quite the passion for traveling — a fact that Peter may find pretty intriguing, given his own propensity of traveling all over the world. He is a pilot after all. Of course, that's not to say that every woman needs to have a love of travel in order to catch Peter's eye, but it certainly doesn't hurt by any means.

Flying has been a big part of Peter's life since the very beginning. In fact, during Hannah's season of The Bachelorette he revealed that it's how his parents had met. His dad was also a pilot while his mom was a flight attendant and the rest, as they say, is history.

Basically, he has flying to thank for his entire existence, so it would make sense that he'd want his future partner to be someone he could share that passion with — someone who would appreciate air travel and globe-trotting adventures just as much as he does. And given the jet-setter that Lexi appears to be, she could make a good travel buddy.

From Italy and Spain to Florida and Sedona, Lexi's social media is filled with various trips she's taken throughout the past several years. And if she and Peter hit it off on the first night, her adventures are far from over.