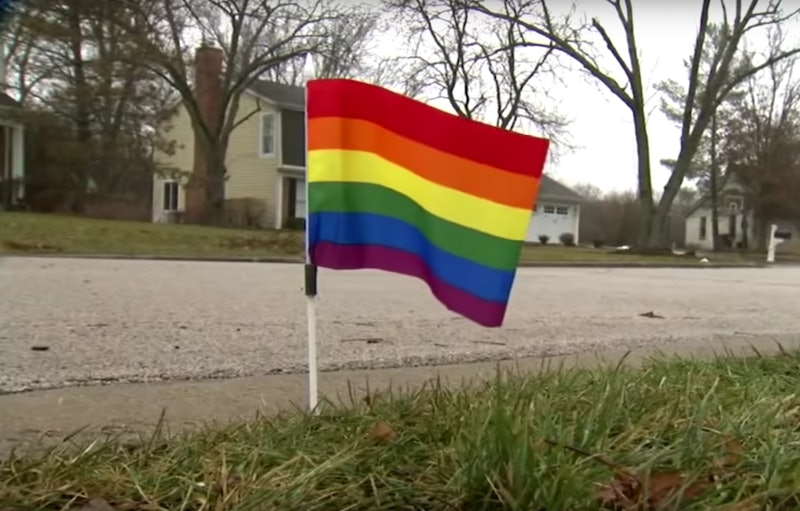 A display of LGBT solidarity in an Illinois community is warming hearts around the country. After a gay pride flag disappeared from a home in Barrington, neighbors sprung into action: They put rainbow flags outside of all of their houses, too.

Casey Handel and Zadette Rosado moved to Barrington in May and so are a new couple in the neighborhood. Earlier this month, they were alarmed to discover that someone had covertly gone onto their property and taken down the pride flag they'd been flying behind their home. The thief replaced it with an American flag.

"We were pretty devastated as far as, who would do this?" Handel told WGN-TV. "Why would they do it?" One neighbor heard of the incident and was also disturbed. Kim Filian — who didn't know the couple well — ordered a pride flag herself and stuck it outside her own house to show support.

"I was astounded that this happened in our neighborhood, right around the corner," Filian told ABC 7. "That was just so disturbing to me." Barrington is a wealthy town in the Chicago metropolitan area. The Chicago Sun-Times recently called the Barrington area "heavily Republican," though its most central precincts went for Hillary Clinton in the 2016 election (surrounding precincts went for Donald Trump).

When other community members learned of what Filian had done, they wanted to join in — so she ended up ordering a whole batch of flags and distributing them to neighbors. "The outpouring of support and everything was just immediate," Handel told ABC 7. "Everybody was saying, 'I'm so sorry this happened, this is not reflective of our community.'"

Now pride flags are flying outside homes all around the neighborhood. WGN-TV reports that people also sent Handel and Rosado gifts and paid them visits. The incident has helped bring them and their neighbors together.

Handel spoke to the outlet about the effect that the show of solidarity is having on their two daughters. "We said, 'Look at what all the good people are doing, look at all the nice people in the world. For every bad person, there's 100 nice people,'" she explained. "It is a really good lesson for them, and for all the children in the neighborhood, to see that there's good in this world and it always outweighs the bad."

The couple's story spread over the holidays, and many people were moved by the Barrington neighborhood's response to the flag theft.

Filian told ABC 7 that the incident made her "angry." When speaking to WGN-TV, she connected it to a broader climate of hostility in the country (hate crimes have spiked in recent years). "Frankly, I've grown weary of this, of all this hate," she said. "It just seemed like there was one thing that I could do that I had control of."

WGN-TV reports that Handel and Rosado are tying the knot at the end of this month.